This week (Last week of February 2021) or the next (First week of March 2021) are likely to shape our country’s political direction. An announcement will be made from the house on the hill. A ground shaking one according to those in the know. All indications are that the announcement will not go down well with a large section of leaders strongly allied to Baba and their supporters. 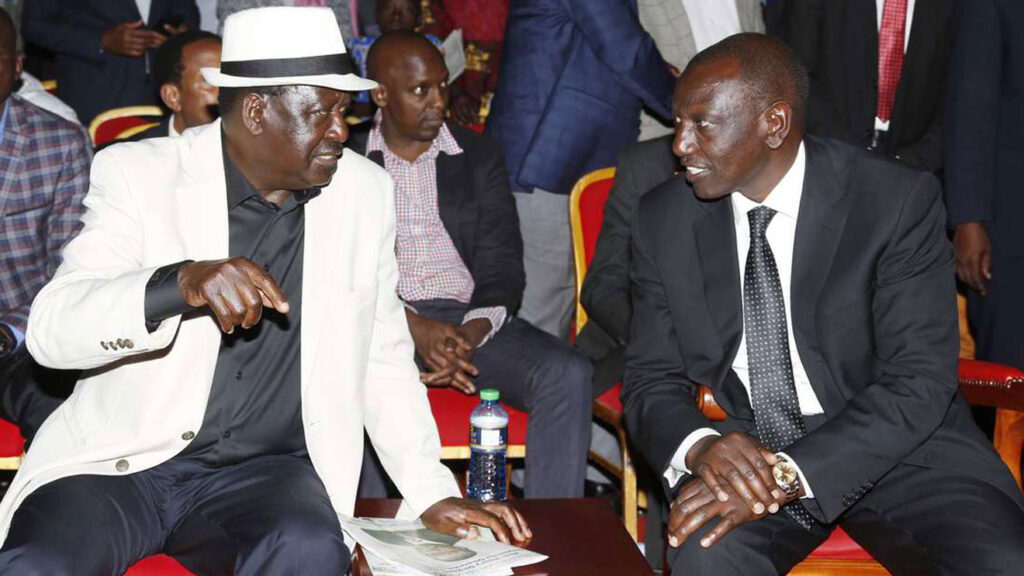 Former Prime Minister Raila Odinga with his friend-turned-foe Deputy President William Ruto( Image Courtesy)
It seems Baba will be betrayed by the other half of the BBI. That half is seemingly keen on a MADVD presidency. After settling on MADVD, everyone else on that line-up is stuff for footnotes when the true history of this country will be written. Forget the current sojourning in the western part of the country. That is a dip stick strategy to see if the alliance currently being marketed will be marketable, if that makes any sense.

The Dee Pee is most probably salivating at that. Baba will then seek an alliance with the Dee Pee after betrayal in the city. Ultimately it will be Kamwana, MADVD and others VS Dee Pee and Baba. The mountain which undeniably is solidly behind the Dee Pee might grow cold feet at the prospect of choosing a side that has Baba. Decades of painting him as their enemy numero uno cannot be reversed by the handshake as those behind it just discovered.

It will not be a lost one for the Baba, Dee Pee team though. There are thurakus behind the Dee Pee and whose economic fortunes dwindled during Jubilee’s second term, who swear they’d rather watch grass grow than have Kamwana near any leadership position. Not that Kamwana has a choice to remain where he is, or extend his tenure by a constitutional amendment. A sizeable chunk of thurakus will side with the Dee Pee Baba side. The worst for Dee Pee in the mountains is voter apathy. The best is very few will choose the Kamwana, MADVD side. The rest of the Baba’s and Ruto’s strongholds, are theirs to lose. Their biggest headache is who will be the president, or the deputy.

Take it or leave it. But before you even argue with me, remember I have said that the hangers-on are stuff for footnotes. For more exposure on politics, attend political science classes. Or invest in books that enlighten people in that field. Or watch movies. Or even meditate as you watch grass grow.
Last edited: Feb 22, 2021