After Centuries, a Seemingly Simple Math Problem Of a Goat in Circular Field Gets an Exact Solution

#1
After Centuries, a Seemingly Simple Math Problem Gets an Exact Solution


GEOMETRY
After Centuries, a Seemingly Simple Math Problem Gets an Exact Solution

December 9, 2020
Mathematicians have long pondered the reach of a grazing goat tied to a fence, only finding approximate answers until now.
36 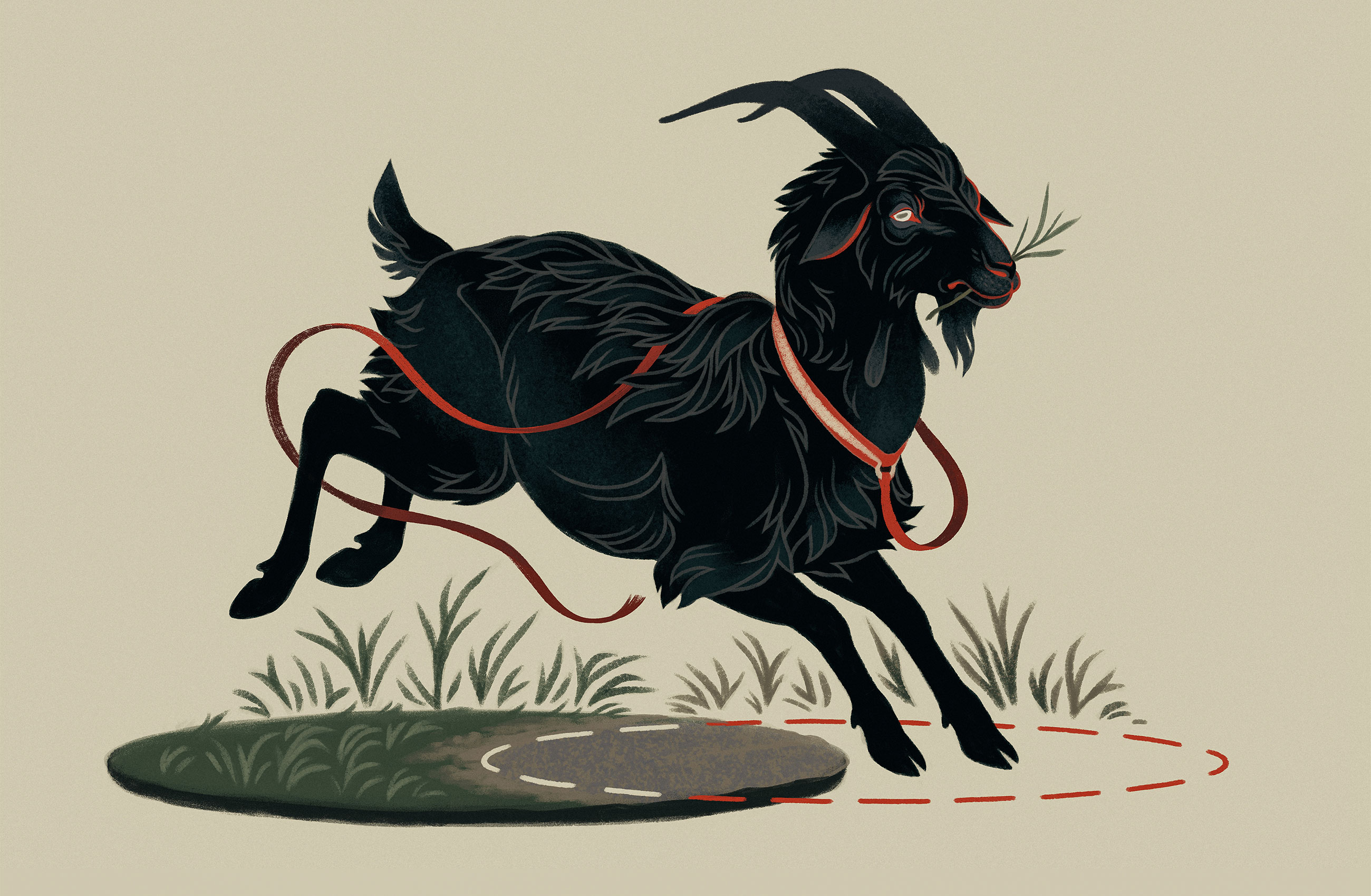 Dappermouth for Quanta Magazine
Here’s a simple-sounding problem: Imagine a circular fence that encloses one acre of grass. If you tie a goat to the inside of the fence, how long a rope do you need to allow the animal access to exactly half an acre?
It sounds like high school geometry, but mathematicians and math enthusiasts have been pondering this problem in various forms for more than 270 years. And while they’ve successfully solved some versions, the goat-in-a-circle puzzle has refused to yield anything but fuzzy, incomplete answers.
Even after all this time, “nobody knows an exact answer to the basic original problem,” said Mark Meyerson, an emeritus mathematician at the U.S. Naval Academy. “The solution is only given approximately.”
But earlier this year, a German mathematician named Ingo Ullisch finally made progress, finding what is considered the first exact solution to the problem — although even that comes in an unwieldy, reader-unfriendly form.
“[This] is the first explicit expression that I’m aware of [for the length of the rope],” said Michael Harrison, a mathematician at Carnegie Mellon University. “It certainly is an advance.”
Of course, it won’t upend textbooks or revolutionize math research, Ullisch concedes, because this problem is an isolated one. “It’s not connected to other problems or embedded within a mathematical theory.” But it’s possible for even fun puzzles like this to give rise to new mathematical ideas and help researchers come up with novel approaches to other problems.
Into (and Out of) the Barnyard
The first problem of this type was published in the 1748 issue of the London-based periodical The Ladies Diary: Or, The Woman’s Almanack — a publication that promised to present “new improvements in arts and sciences, and many diverting particulars.”
The original scenario involves “a horse tied to feed in a Gentlemen’s Park.” In this case, the horse is tied to the outside of a circular fence. If the length of the rope is the same as the circumference of the fence, what is the maximum area upon which the horse can feed? This version was subsequently classified as an “exterior problem,” since it concerned grazing outside, rather than inside, the circle. 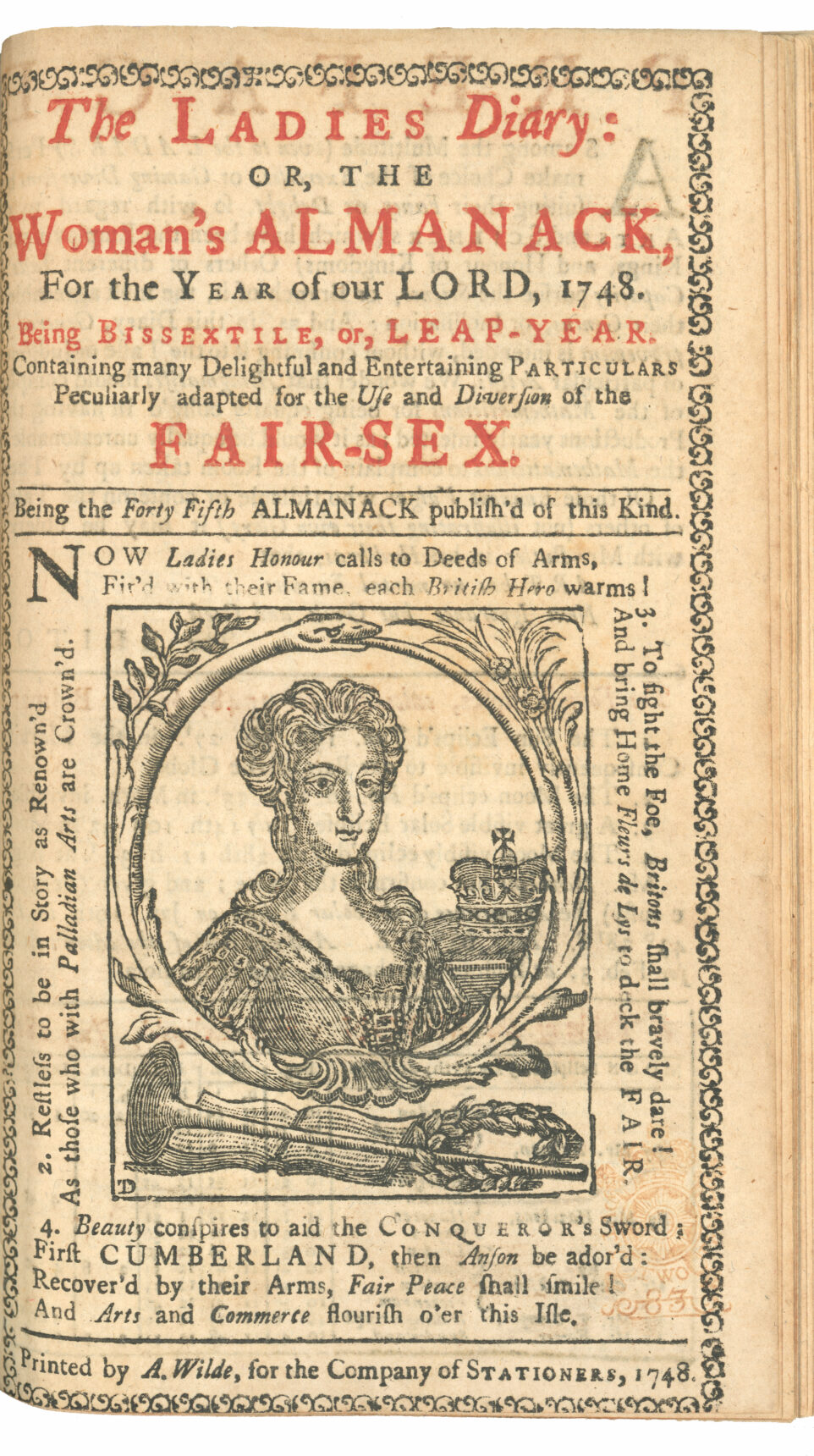 A form of the grazing goat problem first appeared in the 1748 issue of The Ladies Diary: Or, The Woman’s Almanack.
Courtesy of Princeton University Library Special Collections
An answer appeared in the Diary’s 1749 edition. It was furnished by “Mr. Heath,” who relied upon “Trial and a Table of Logarithms,” among other resources, to reach his conclusion.
Heath’s answer — 76,257.86 square yards for a 160-yard rope — was an approximation rather than an exact solution. To illustrate the difference, consider the equation x2 − 2 = 0. One could derive an approximate numerical answer, x = 1.4142, but that’s not as accurate or satisfying as the exact solution, x = 2–√.
The problem reemerged in 1894 in the first issue of the American Mathematical Monthly, recast as the initial grazer-in-a-fence problem (this time without any reference to farm animals). This type is classified as an interior problem and tends to be more challenging than its exterior counterpart, Ullisch explained. In the exterior problem, you start with the radius of the circle and length of the rope and compute the area. You can solve it through integration.
“Reversing this procedure — starting with a given area and asking which inputs result in this area — is much more involved,” Ullisch said.
In the decades that followed, the Monthly published variations on the interior problem, which mainly involved horses (and in at least one case a mule) rather than goats, with fences that were circular, square and elliptical in shape. But in the 1960s, for mysterious reasons, goats started displacing horses in the grazing-problem literature — this despite the fact that goats, according to the mathematician Marshall Fraser, may be “too independent to submit to tethering.”
Goats in Higher Dimensions
In 1984, Fraser got creative, taking the problem out of the flat, pastoral realm and into more expansive terrain. He worked out how long a rope is needed to allow a goat to graze in exactly half the volume of an n-dimensional sphere as n goes to infinity. Meyerson spotted a logical flaw in the argument and corrected Fraser’s mistake later that year, but reached the same conclusion: As n approaches infinity, the ratio of the tethering rope to the sphere’s radius approaches 2–√.
As Meyerson noted, this seemingly more complicated way of framing the problem — in multidimensional space rather than a field of grass — actually made finding a solution easier. “In infinite dimensions, we have a clean answer, whereas in two dimensions there is not such a clear-cut solution.”


The grazing goat problem can take two forms, but both usually start with a goat tied to a circular fence. The interior version asks how long a goat’s leash should be if we want it to access exactly half the enclosed area. The exterior version asks how much outside area a goat has access to with a given length of rope and a given fence circumference. (In this case, the rope’s length is equal to the fence’s circumference.)
Samuel Velasco/Quanta Magazine
In 1998, Michael Hoffman, also a Naval Academy mathematician, expanded the problem in a different direction after coming across an example of the exterior problem through an online newsgroup. This version sought to quantify the area available to a bull tied outside a circular silo. The problem intrigued Hoffman, and he decided to generalize it to the exterior of not just a circle, but any smooth, convex curve, including ellipses and even unclosed curves.
“Once you see a problem stated in a simple case, being a mathematician you often try to see how you can generalize it,” Hoffman said.
It’s often of value in math to think up new ways of getting an answer — even to a problem that has been solved before.
Mark Meyerson, U.S. Naval Academy
Hoffman considered the case in which the leash (of length L) is less than or equal to half the curve’s circumference. First he drew a line tangent to the curve at the point where the bull’s leash is attached. The bull can graze on a semicircle of area πL2/2 bounded by the tangent. Hoffman then devised an exact integral solution for the spaces between the tangent and the curve to determine the total grazing area.
More recently, the Lancaster University mathematician Graham Jameson worked out the three-dimensional case of the interior problem in detail with his son Nicholas, choosing it because it has received less attention. Since goats can’t move easily in three dimensions, the Jamesons called it the “bird problem” in their 2017 paper: If you tether a bird to a point on the inside of a spherical cage, how long should the tether be to confine the bird to half the cage’s volume?
“The three-dimensional problem is actually simpler to solve than the two-dimensional one,” the older Jameson said, and the pair arrived at a precise solution. However, since the mathematical form of the answer — which Jameson characterized as “exact (albeit horrible!)” — would have been daunting to the uninitiated, they also used an approximation technique to provide a numerical answer for the tether length that “bird handlers might prefer.”
Getting His Goat
Nevertheless, an exact solution to the two-dimensional interior problem from 1894 remained elusive — until Ullisch’s paper earlier this year. Ullisch first heard of the goat problem from a relative in 2001, when he was a child. He started working on it in 2017, after earning a doctorate from the University of Münster. He wanted to try a new approach.
It was well known by then that the goat problem could be reduced to a single transcendental equation, which by definition includes trigonometric terms like sine and cosine. That could create a roadblock, as many transcendental equations are intractable; x = cos(x), for example, has no exact solutions.


Ingo Ullisch reached an exact solution for the grazing goat problem by applying a branch of math known as complex analysis.
Courtesy of Ingo Ullisch
But Ullisch set up the problem in such a way that he could get a more tractable transcendental equation to work with: sin(β) – β cos(β) − π/2 = 0. And while this equation may also seem unmanageable, he realized he could approach it using complex analysis — a branch of mathematics that applies analytic tools, including those of calculus, to expressions containing complex numbers. Complex analysis has been around for centuries, but as far as Ullisch knows, he was the first to apply this approach to hungry goats.
With this strategy, he was able to transform his transcendental equation into an equivalent expression for the length of rope that would let the goat graze in half the enclosure. In other words, he finally answered the question with a precise mathematical formulation.
Unfortunately, there’s a catch. Ullisch’s solution is not something simple like the square root of 2. It’s a bit more abstruse — the ratio of two so-called contour integral expressions, with numerous trigonometric terms thrown into the mix — and it can’t tell you, in a practical sense, how long to make the goat’s leash. Approximations are still required to get a number that’s useful to anyone in animal husbandry.
But Ullisch still sees value in having an exact solution, even if it’s not neat and simple. “If we only use numerical values (or approximations), we will never get to know the intrinsic nature of the solution,” he said. “Having a formula can give us further insight into how the solution is composed.”

Not Giving Up the Goat

Ullisch has set aside the grazing goat for now, as he’s not sure how to go further with it, but other mathematicians are pursuing their own ideas. Harrison, for instance, has an upcoming paper in Mathematics Magazine in which he exploits properties of the sphere to attack a three-dimensional generalization of the grazing-goat problem.
“It’s often of value in math to think up new ways of getting an answer — even to a problem that has been solved before,” Meyerson noted, “because maybe it can be generalized for use in other ways.”
And that’s why so much mathematical ink has been devoted to imaginary farm animals. “My instincts say that no breakthrough mathematics will come from work on the grazing-goat problem,” Harrison said, “but you never know. New math can come from anywhere.”

Hoffman is more optimistic. The transcendental equation Ullisch came up with is related to the transcendental equations Hoffman investigated in a 2017 paper. Hoffman’s interest in those equations was sparked, in turn, by a 1953 paper that stimulated further work by presenting established methods in a new light. He sees possible parallels in the way Ullisch applied known approaches in complex analysis to transcendental equations, this time in a novel setting involving goats.
“Not all progress in mathematics comes from people making fundamental breakthroughs,” Hoffman said. “Sometimes it consists of looking at classical approaches and finding a new angle — a new way of putting the pieces together that might eventually lead to new results.”
This article was reprinted on Wired.com.