Barrick Gold to give Tanzania mines stake and $300 million

#1
Barrick Gold will give Tanzania a 16 per cent stake in three gold mines, a 50 per cent share in revenues from the mines and a one-off payment of $300-million to resolve a dispute that has hit its operations in the country, the two sides said.

The Canadian miner and Tanzanian government have been in talks for months after the east African country banned the export of unprocessed minerals and enacted new laws to raise state ownership of the nation's mines.


At 1200 GMT, Acacia's London-listed shares were up 18 per cent following news of the deal.

Barrick Chairman John Thornton told a news conference in the Tanzanian capital the deal would have to be approved by the independent shareholders and directors of Acacia Mining.


Tanzanian justice and constitutional affairs minister Palamagamba Kabudi said the agreement was in keeping with the new mining laws passed in July.

"We have also agreed to have a 50:50 share of revenues between the government and Acacia Mining from all the mines," he added.

#4
Peanuts in consideration of the billions of dollars stollen by the same company.

#5
So far the Tanzanian negotiators are not yet into bribery and corruption, they have done reasonably well to get that percentage. It is a good start.
If Africa could get that sort of Percentage for all it’s resources poverty and the debt burden would be significantly reduced.

#6
@spear said it was dumb for Magufuli to demand more.

#7
That company has had it's share of profits for a very long time... shida ya Tanzanians ni maziwa lala. If they could have come up with such laws long time ago then Tanzania would be an economic giant in Africa considering the low corruption levels there.

#8
K-LIST DON DADA said:
That company has had it's share of profits for a very long time... shida ya Tanzanians ni maziwa lala. If they could have come up with such laws long time ago then Tanzania would be an economic giant in Africa considering the low corruption levels there.
Click to expand...
But its magufuli time to redeem tz more to come though @spear hataki kusikia that tz is heading in the right direction ndio uhuruto wasionekane wabaya

#9
With all due respect to @spear sentiments that he conveyed in the past, Dr. John "Booze" Magufuli has just undone many decades of "foreign investors" not giving a shit in the mineral exploration and mining sector in Africa.......otherwise, why would Acacia/Barrick cede so much???....Whatever agreements were made in the past by a bunch of casual racists smells like a New Jersey chemical spill and only required a guy with "steel-balls" to sanitize.....Africa needs to wake up now!!!!!!....

I don't mind Tz getting more funds for its minerals, who wouldn't. What I like is that this games of nerves and uncertainty gives us the edge as our infrastructure projects race to completion before them, as they struggle for finances.
Last edited: Oct 21, 2017

#11
4makind said:
A great feat indeed.........$ 300M from claims of $ 190B
Click to expand...
This is a good example of how we at times do not want to understand the facts...let me explain.... the deal sounds a tard absurd until you realize that Bulyanhulu Mine, which is only one of the 3, has a greater than 80 years mine-life ahead, at the current production rate!!!!!..... What that essentially means is that TZ shall recover the balance easily ONLY from the 50% revenue coming from the 3 mines by the end of their mine-lives; by which time you and I will be producing angel farts in heaven....

Who will win the 2022 elections? Ruto vs Raila.Cast your vote!

#12
spear said:
Well Acacia isn't aware of that payment agreement.
View attachment 133918
I don't mind Tz getting more funds for its minerals, who wouldn't. What I like is that this games of nerves and uncertainty gives us the edge as our infrastructure projects race to completion before them as they struggle for finances.
Click to expand...
I agree with you @ spear but the discussions and preliminary agreements were made between a very senior representative of the largest single producer of gold in the world; "Barrick" through John Thornton and Dr. John Booze Mapadlocks... Remember Barrick OWNS > 60 % of Acacia and not the other way round...

#13
chocstik said:
50% revenue
Click to expand...
profits not revenue, and the deal has not been concluded. Negotiations are still going on, 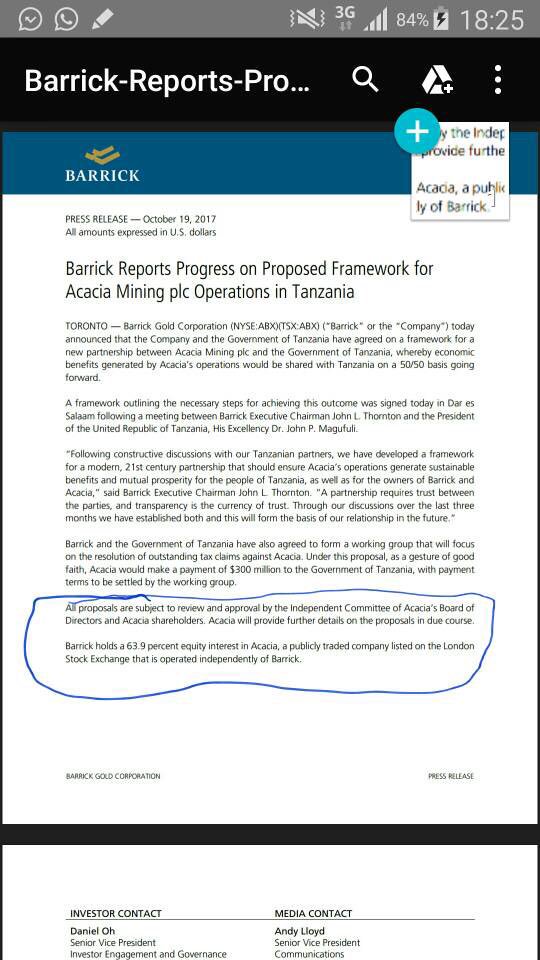 #14
4makind said:
profits not revenue
Click to expand...
the same difference bro...lets make books and reading our friends .....a la' below.....

#16
4makind said:
profits not revenue, and the deal has not been concluded. Negotiations are still going on,

Click to expand...
Pick your poison carefully.... Remember Barrick OWNS > 60 % of Acacia and not the other way round...

Who will win the 2022 elections? Ruto vs Raila.Cast your vote!

There's also the fact that revenue from rare earth and other minerals apart from gold and i think copper will belong 100% to Tanzania.

#18
These big mining companies are very crafty in their accounting........... Governments should go for high royalties of even up to 30% then treat them like other companies.........

#19
4makind said:
These big mining companies are very crafty in their accounting........... Governments should go for high royalties of even up to 30% then treat them like other companies.........
Click to expand...
Very crafty. That's why the devil is in the details and they can just drag out the process for years. Either way this is definately not the end of this matter. Symbion power has sued for $500 at the world bank court or something.

John Magufuli is bulldozing the opposition and wrecking the economy

“African socialism” did not work in Tanzania last time, either

CRITICALLY ill in a hospital in Nairobi, Tundu Lissu, the chief whip of Tanzania’s main opposition party, Chadema, is a lesson to those who would criticise the Tanzanian president, John Magufuli (pictured). On September 7th Mr Lissu was gunned down in broad daylight near his house in the sleepy administrative capital, Dodoma, after returning from a session in parliament. The attempted assassination came just two weeks after he was arrested—for the sixth time—for such things as insulting the president. It is not clear who was behind the attack. A month later, the government has yet to make any arrests. Mr Lissu had previously complained about being followed, and said he worried he might be killed. “This cowardly attack on one of Tanzania’s most fearless and prominent politicians raises concerns about the safety of all dissident voices in the country, at a time when space for dissent is quickly shrinking,” said Amnesty International, a human-rights group.

Tanzania, a country of 55m people on the East African coast, is rarely seen as one of Africa’s problem cases. Unlike Congo, Uganda or Burundi, it has never had a civil war or a military dictatorship. And although its elections have never once ousted the party (and its predecessor) that has governed Tanzania since independence in 1962, nor are they especially bloody affairs. Yet over the past two years, since the election of John Magufuli, Tanzania’s descent into autocracy has been stunning. It is a lesson in how when the presidency is strong and other institutions are weak, a single bad leader can set a country back many years.

The attack on Mr Lissu occurred in an atmosphere of intensifying political repression. Opposition rallies have been banned for almost a year on spurious security grounds. Dozens of people have been arrested for insulting the president on internet chat groups under a cybercrimes law. Even musicians have not escaped the rap. In March Emmanuel Elibariki, a hip-hop artist, released a song in which he asked “is there still freedom of expression in the country?” The answer was no: he was swiftly arrested and his song was banned from the airwaves.

Mr Lissu’s is not the only case where words have been met with violence. In August the offices of IMMMA, a law firm that has handled lawsuits against the government, was bombed. Several opposition figures have disappeared in the past year, including the personal assistant of Freeman Mbowe, the leader of Chadema. On the island of Zanzibar members of the Civic United Front, a separatist-leaning party that won elections in 2015 that were later annulled, have been targeted by pro-government militias known as “zombies”.

Mr Magufuli, who is nicknamed “the bulldozer”, impressed many when he came into office by cracking down on corruption. But his economic ideas have a whiff of the “African socialism” of Julius Nyerere, the country’s founding leader, who declared a one-party state, nationalised factories and forced peasants at gunpoint onto collective farms. Donors had to step in to prevent mass starvation.

Mr Magufuli is not as ruinously radical. But he has caused traffic to collapse at Dar es Salaam, Tanzania’s main port, which serves six countries, by imposing a huge tax on goods that pass through it. Ships have simply gone to Kenya instead.

More startling still is Tanzania’s dispute with Acacia, a British gold-mining firm. The government claims that its two mines have been producing more than 10 times as much gold as they declared (which would make them the two largest gold mines in the world, by far). Preposterously, it says the firm owes taxes of $190bn, or roughly four times Tanzania’s annual GDP. Acacia has been forced to halt exports and has cut back production.

Other firms worry they may be next. Petra Diamonds closed its mine in Tanzania in September after the government seized a parcel of diamonds it was exporting. And on October 9th Aliko Dangote, a Nigerian cement billionaire, accused Mr Magufuli of scaring investors away. Few Tanzanian businessmen are as critical publicly, but in private they are damning. “We are shit scared. If this can happen to Acacia, it can happen to anyone,” says one.

Foreign firms can at least turn to foreign judges for protection. In August a Bombardier jet bought for Air Tanzania was seized by a Canadian court on behalf of Stirling Civil Engineering. The company had won an international arbitration in 2010 after not being paid for building roads. This may not be the last such judgment. Symbion Power, an energy producer, is claiming $561m from Tanzania’s state-owned electricity utility after it was not paid for electricity for more than a year.

What will happen now? There are few constraints on Mr Magufuli. With the opposition neutered, the ruling party remains mostly unchallenged. Mr Magufuli’s allies in parliament have even suggested extending the presidential term from five years to seven. Tanzania suffered wretchedly under one bullheaded socialist. It cannot afford another.

#20
spear said:
Well Acacia isn't aware of that payment agreement.
View attachment 133918
I don't mind Tz getting more funds for its minerals, who wouldn't. What I like is that this games of nerves and uncertainty gives us the edge as our infrastructure projects race to completion before them, as they struggle for finances.
Click to expand...
Raisi ameongea na anadeal na mwenye mbwa, that is barrick, umbwa acacia hana nguvu, na akileta jeuri anaondolewa pale, because he is guilty, you said they was going to sue us, what happened now.
You must log in or register to reply here.
Share: Facebook Twitter Reddit Pinterest Tumblr WhatsApp Email Link