#1
After his ex-wife turned him in, a Texas man has been arrested for participating in last Wednesday's riot at the Capitol, during which five people died including a police officer.

Larry Rendell Brock faces two federal charges of knowingly entering a restricted building without lawful entering and one count of violent entry and disorderly conduct.
According to NBC 5 in Dallas, the 53-year-old Brock surrendered to FBI agents on Sunday after he agreed to meet them at the police department in Grapevine, Texas.
Brock's arrest affidavit alleges that more than one person turned in Brock after recognizing him in the news footage, but his ex-wife of 18 years was one of the people who reported him to the FBI.

"I just know that when I saw this was happening, I was afraid he would be there," Brock's ex-wife allegedly told the FBI, according to the affidavit. "I think you already know he was there. It is such a good picture and I recognize his patch." (Brock is wearing numerous patches on his chest.)

In an interview with the magazine, Brock emphasized that he believed that there had been significant election fraud — despite the repeated failure of Trump's legal team to show any evidence of this.
"The President asked for his supporters to be there to attend," Brock told the magazine. "I felt like it was important, because of how much I love this country, to actually be there."
Although he was allegedly carrying zip-tie handcuffs, Brock told The New Yorker that he had found them on the ground.
"I wish I had not picked those up," he told the outlet. "My thought process there was I would pick them up and give them to an officer when I see one. I didn't do that because I had put them in my coat, and I honestly forgot about them."

Brock has not yet entered a plea, and court records do not reflect an attorney authorized to speak on his behalf.

#3
Trump Approves Emergency Declaration for Washington (7:44 p.m.)
Trump has approved an emergency declaration for the District of Columbia with the approach of President-elect Joe Biden’s inauguration and in the wake of the assault on the U.S. Capitol last week.

Trump, according to a statement released by the White House on Monday night, authorizes the Department of Homeland Security and the Federal Emergency Management Agency to “identify, mobilize, and provide at its discretion, equipment and resources necessary to alleviate the impacts of the emergency.”

Washington Mayor Muriel Bowser had asked Trump to declare a “pre-emergency disaster” and for the Homeland Security to establish a “security and federal force deployment plan.”

Earlier Monday, the acting secretary of Homeland Security, Chad Wolf, resigned. He is to be replaced by Pete Gaynor, the administrator of FEMA. The White House statement did not mention Gaynor’s new role. -- John Harney

#4
She did that to save face. Don't trust what kungurus do PUBLICLY! 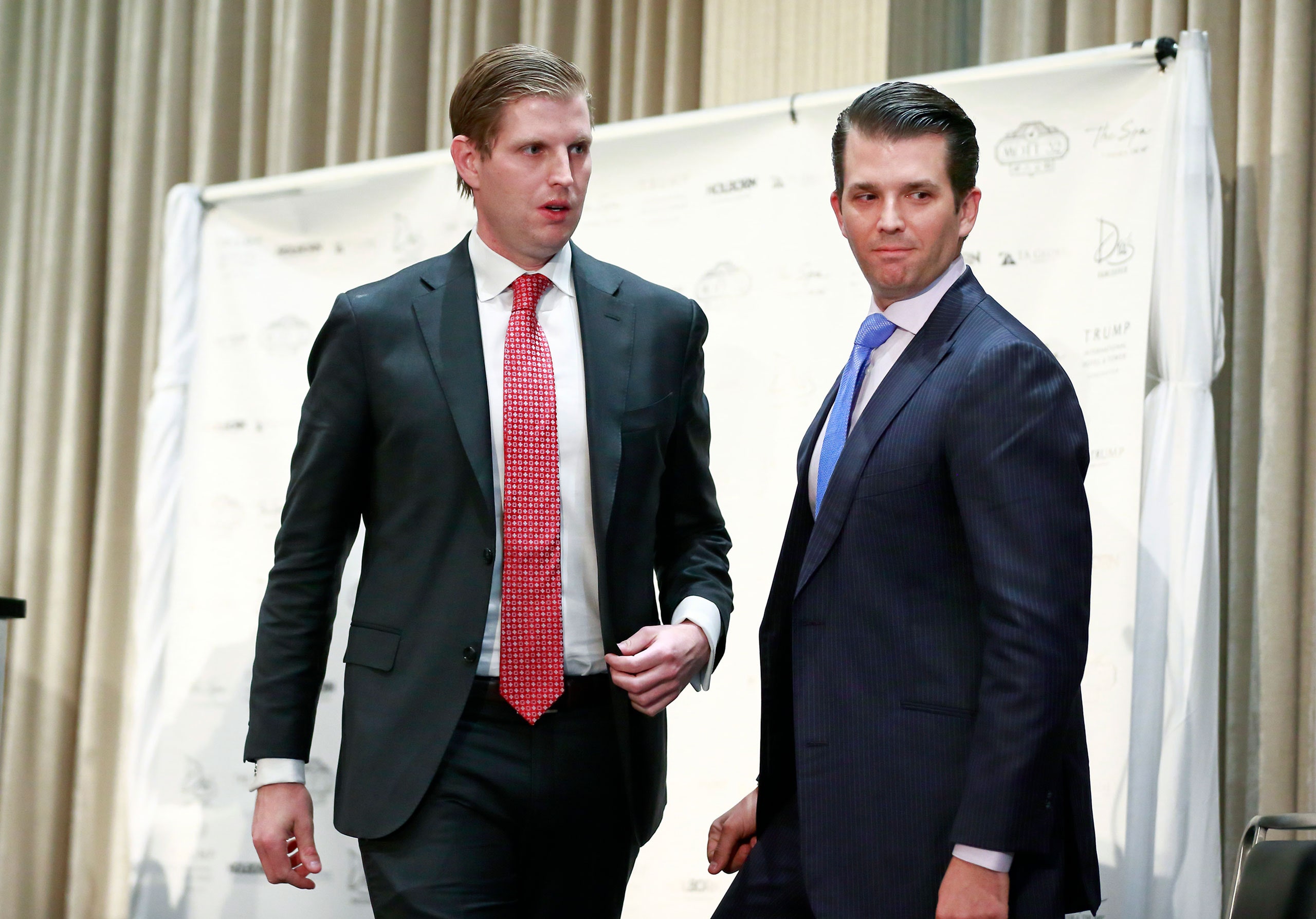 Driven over the edge by his expulsion from Twitter, a deranged Donald J. Trump ordered his two adult sons to hand out flyers with his tweets on them.
The incident occurred at three o’clock Sunday morning, when Trump, wide awake and in a state of extreme agitation, had an idea for a tweet but no platform on which to broadcast it.
Wearing his bathrobe, he summoned his adult sons to the Oval Office and scrawled his tweet on a piece of paper with one of the Sharpies that had served him well in the past.

If, in fact, Trump thinks that the rioters were Antifa, it was really nice of him to do that video where he said that he loved them.
Last edited: Jan 12, 2021
H

Driven over the edge by his expulsion from Twitter, a deranged Donald J. Trump ordered his two adult sons to hand out flyers with his tweets on them.
The incident occurred at three o’clock Sunday morning, when Trump, wide awake and in a state of extreme agitation, had an idea for a tweet but no platform on which to broadcast it.
Wearing his bathrobe, he summoned his adult sons to the Oval Office and scrawled his tweet on a piece of paper with one of the Sharpies that had served him well in the past.

If, in fact, Trump thinks that the rioters were Antifa, it was really nice of him to do that video where he said that he loved them.
Click to expand...
Inheritance is the worst bitch.

#7
Is taking part in a demonstration a criminal offence?

#8
Not a peaceful demonstration...But a violent demo that results in the destruction of property and the death of a Law Enforcement officer is a criminal offense- murder etc.
"The attacks on our Capital killed a police officer, left four rioters dead, exposed lawmakers to Covid-19 and threatened the constitutional transfer of power," Laura Feyer, deputy press secretary for New York Mayor Bill de Blasio, said in an emailed statement.

#10
A supporter of the US president who was arrested at the Capitol riot was said to have died by suicide.

A medical examiner in Fulton County, Atlanta, ruled on Tuesday that the death of Christopher Stanton Georgia was by suicide, confirming earlier reports.

The 53-year-old was also said to have suffered a “gunshot wound to the chest”, the medical examiner said.

He was found by his wife in the basement of their home in Alpharetta, Georgia, on Saturday, according to reports.

Georgia, who was said to have been a regional portfolio manager at a North Carolina bank, was arrested in Washington DC on Wednesday evening after taking part in the riot on the Capitol.

According to the Washington Examiner, he was charged with attempting to break into the US Capitol alongside supporters of the US president.

They had earlier been instructed by the president to march on the country’s legislature with “strength”.

Georgia, who pleaded not guilty in court on Thursday, was also charged with violating an evening curfew in Washington DC that was imposed after the riot.

He was said to have stayed behind and did not disperse at a police request.

Officers were called to his home in Alpharetta on Saturday morning, having received a phone call from his wife.

According to a police report seen by the Daily Mail, she told officers there was "blood everywhere" and that “My husband is dead".

Police were also reported to have removed two rifles from the property.

The 53-year-old’s death follows that of five others who died following Wednesday’s riot.

They included a Capitol Police officer and supporters of Donald Trump, some of whom were said to have suffered medical emergencies, while one other was shot.

The FBI said on Tuesday that more than 70 people had been arrested in relation to Wednesday’s riot, with federal prosecutors expecting “hundreds” of others.

Adam Christian Johnson, 36, who took away a lectern waving to the camera, became one of the most prominent symbols of the Capitol riots
(Getty Images)


The grinning Capitol Hill rioter seen in viral social media images walking away with Speaker Nancy Pelosi’s lectern during last week’s chaos, “is not going to be attending the inauguration," said his lawyer, admitting that his will be a difficult case to defend.
Adam Christian Johnson, 36, who belongs to Florida, was released on Monday on a bond of $25,000. He was taken into custody last Friday on charges of knowingly entering or remaining in any restricted building or grounds without lawful authority and theft of government property, like other rioters.
According to a report in Tampa Bay Times, assistant US Attorney Patrick Scruggs expressed concern that Mr Johnson would attend the inauguration event, emphasizing that he is to travel only for court purposes. The report also said the case will be handled in Washington DC, however, restrictions on his travel remain in place till his case is pending.

Mr Johnson is supposed to attend the next court hearing on 19 January, a day before President-elect Joe Biden’s inauguration.
However, his lawyer Dan Eckhart said that Mr Johnson will not try to attend the inauguration.
“I can assure you he is not going to be attending the inauguration,” the report quoted Mr Eckhart as saying.
The second of the two lawyers representing Mr Johnson, David Bigney, said that the father of four had been receiving death threats and would “like to just get home to his family.”

Staff member
#11
Mangele said:
was said to have died by suicide
Click to expand...
Trump is contemplating this move.
Soon after selling nuclear codes to Noz Korea.
(Hii jaba imeshika..)

#12
Top European officials are refusing to meet with U.S. Secretary of State Mike Pompeo, according to Reuters, leading to the cancelation of his planned diplomatic trip in what appears to be the latest and among the most profound backlashes to the Trump Administration after the assault on the U.S. Capitol Wednesday. 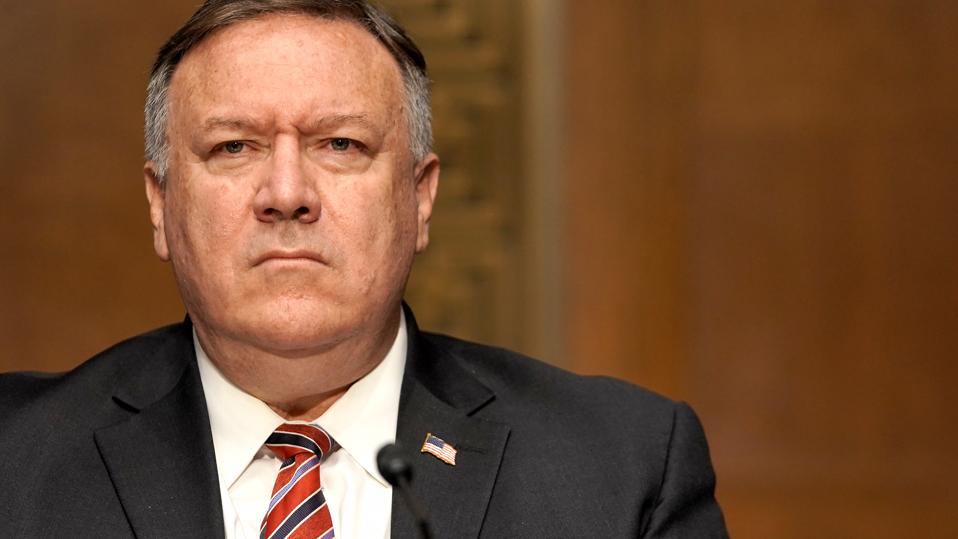 Secretary of State Mike Pompeo is seen during a Senate Foreign Relations Committee hearing on July ... [+]


KEY FACTS
Pompeo had planned visits to Luxembourg and Brussels to meet with top European Union officials, but those officials have called off the meetings after the Capitol riots, Reuters reported. The trip was to be Pompeo’s last trip abroad in his role as top U.S. diplomat and included a dinner planned with NATO Secretary-General Jens Stoltenberg. In a statement, the State Department said the cancelation was the result of the presidential transition, while not mentioning the reported snub from European officials.

Pompeo was among the most prominent U.S. officials who had refused to acknowledge Biden’s victory in the 2020 presidential election, at one point assuring that there would be a “smooth transition to a second Trump Administration.” This served to further fuel baseless allegations of widespread fraud in the election that cost President Donald Trump a second term. Rioters angrily took up that message on Wednesday as they stormed the Capitol, leading to deadly clashes with police as members of Congress feared for their lives. Trump spoke to his crowd of supporters before they stormed the Capitol, further pushing the fraud claims. Trump and his administration have faced widespread condemnation since the riots, with calls for his removal from office either through the 25th Amendment or an unprecedented second impeachment.

Antony Blinken, Biden’s pick to lead the State Department, is expected to provide Pompeo’s team with a list of career officials who will temporarily remain in acting positions until the Senate confirmation process is complete.