#1
Charlotte Is Starting To Regret Hosting Trump’s Renomination Convention
President Donald Trump’s racist and xenophobic statements have drawn official condemnation from a city that is now predominantly black and Latino.

HARLOTTE, N.C. — Republican Party leaders scoping out locations to renominate Donald Trump for president next year have arrived in a city that has labeled his statements “racist” and that almost wishes it had never invited them in the first place.

“This is one of the ugliest moments of political discourse,” said Braxton Winston, a Charlotte City Council member who was on the losing side of last summer’s 6-5 vote to approve a contract to host the 2020 Republican convention. “This is specifically about the racism of this administration and the elements that that brings. I wish we were not bringing that here.”

Last week, the council went so far as to discuss the possibility of backing out of the agreement, but ultimately decided against it after the city attorney said trying to do so would incur big legal bills and would almost certainly end with a judge requiring the city to host Trump’s convention, anyway.

“Currently, we have no option to pull out,” said Dimple Ajmera, another city council member who opposed hosting the convention but now agrees the city is stuck with it. 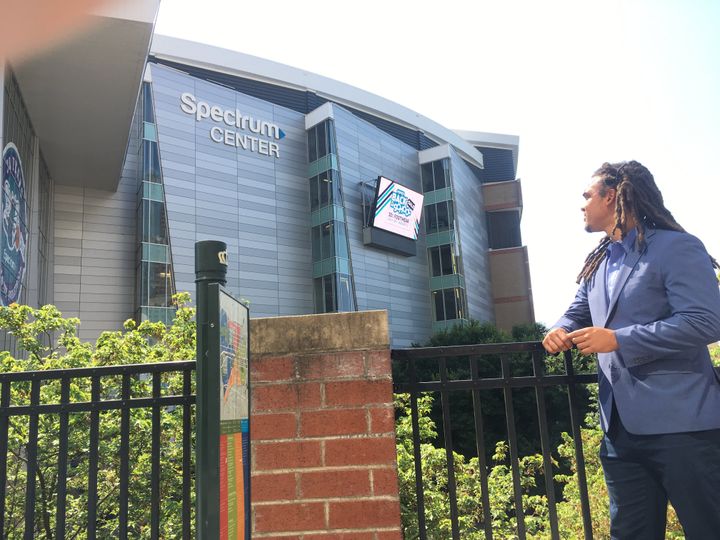 S.V. DATE/HUFFPOSTCharlotte City Council member Braxton Winston at the Charlotte Spectrum Center, where Republican National Committee members were touring to prepare for the 2020 convention next August.

Ajmera and others on the board did successfully push a resolution last week that “strongly condemns all of President Donald Trump’s racist and xenophobic social media tweets and comments.”

It was drafted in the days after Trump attacked four Democratic congresswomen – one Latina, one African American and two Muslim ― telling them they should “go home” to the countries they came from if they were unhappy in the United States. All four women — colloquially known as “the Squad” — are U.S. citizens, and three were born in the United States. The resolution passed on a 9-2 vote – with only the council’s two Republican members in opposition. (It was also drafted and passed days before Trump’s latest attack on Maryland Democratic Rep. Elijah Cummings, who is black.)

The resolution, however, has no practical effect. Many Republican National Committee members who are in town this week to inspect the various venues to be used in next August’s convention said they didn’t even know the city had passed it.

“This is the first I’ve heard of it,” said Richard Porter, an RNC member from Illinois.

Another member, who spoke only on the condition of anonymity, said she disagreed with the premise entirely. “As a woman and a Hispanic, I do not think the president is racist,” she said. “He says it like it is.”

Ajmera and other city council members worry this attitude — that Trump’s statements constitute perfectly acceptable public discourse — is what will come to Charlotte next year, staining the city’s reputation for years to come.

“We are tying ourselves to the most toxic convention in history,” Ajmera said. “Is history going to judge us right five, 10 years down the road?”

The city council’s July 22 resolution came in the days following Trump’s attacks on “the Squad” and after a Greenville, N.C., rally crowd chanted, “Send her back,” about one of the congresswomen while Trump stopped speaking to let it continue.

Yet, the resolution’s text also details a litany of Trump’s previous racist remarks since taking office, including his false claim that 15,000 recent Haitian migrants “all had AIDS”; his comment that visitors from Nigeria who saw the United States would never want to return to their “huts”; and, most infamously, when he said that included among neo-Nazis who marched in Charlottesville, Virginia, were some “very fine people.”

All but the attacks on the congresswomen took place before the city filed its official bid for the convention in February 2018 — raising the question of why Charlotte ever wanted a convention featuring Trump in the first place.

“The cons outweigh the pros. I wish we were not hosting this,” Winston said.

Corine Mack, president of the Charlotte area chapter of the NAACP, said the city kept its negotiations with the RNC secret until it was too late for opponents to organize. “We were not aware of it until it was already done,” she said. “I think their love of money is driving this.”

Ed Driggs, one of the council’s two Republican members and one of the six votes in favor of bringing the GOP convention to Charlotte, said that if people opposed the idea, the time to do so was in 2017 when discussions first started. “The president was recognizable as who he was when we started down this path,” he said. “This is a huge opportunity for Charlotte.”

Driggs also opposed last week’s resolution because he said Trump was justified in lashing out at the congresswomen, particularly the Muslim members. He said one supports proselytizing her religion and that neither has renounced Islamist terrorism forcefully enough. “One of the two members wanted to convert everyone to Islam,” he claimed, adding that he could not remember which one. “It’s emotionally troublesome for a lot of people in America.”

Driggs said he saw a video somewhere depicting this, but could not remember where.

In any event, Driggs said the divisiveness in the nation is not Trump’s doing, but rather was started by the Obama administration. “I see people on both sides behaving poorly.”

We have citizens who know what tear gas tastes like. We know what conflict among ourselves is like. This is toxic.Braxton Winston, Charlotte City Council member​
Although North Carolina voted for Trump by 4 points over Democratic nominee Hillary Clinton in 2016, Charlotte and the surrounding Mecklenburg County did not, instead voting 65-35 for Clinton. Nevertheless, city leaders decided to try to host the Republican convention in 2020 – eight years after the city hosted the 2012 reelection convention for then-President Barack Obama.

Mike Collins, a public radio show host in Charlotte, said that in addition to hoteliers and restaurateurs who usually favor such events, some proponents had hoped that seeking the GOP convention might help smooth over the city’s troubled relationship with the Republican-controlled legislature in Raleigh. That goal seems to have been achieved, he said, adding, “the legislature sees us in a different light.”

A bigger piece of the drive for the convention, though, was the continuing search for status and legitimacy. “Charlotte is an aspirational city. We want to be in the big leagues,” Collins said. “We want to be the next Atlanta.”

Winston, who ran for an at-large city council seat in the months following the violent aftermath of a local police shooting in September 2016, said that logic would make sense if the Republican Party was still about ideas like the size and scope of government. With Trump, the party was no longer about ideas, he said.

“We have citizens who know what tear gas tastes like. We know what conflict among ourselves is like,” Winston said. “This is toxic.”

Mayor Vi Lyles was on vacation this week, according to her office, and could not be reached for comment. In light of Trump’s behavior and the city council’s resolution, a spokesman said, Lyles had made clear that she will not be appearing in the convention hall to welcome delegates — a break from tradition at nominating conventions.

A Fear Of Unrest

As RNC members toured the Spectrum Center one morning this week — a GOP elephant logo displayed on a giant television screen amid an array of Charlotte Hornets’ iconography — city residents’ attitudes about next summer’s convention ranged from shrugs to downright fear.

Deokgi Ham, a Korean immigrant who has lived in Charlotte for 17 years and whose family runs a small convenience store across the street from the arena, said he’s worried that street closures due to heightened security would hurt business for that entire week.

“There are going to be a lot of protests,” Ham predicted.

Regina Wooten, who at 59 hopes to move out of a homeless shelter and into her own apartment next month, wondered why the city was bringing someone like Trump to begin with.

“I don’t think he should come to Charlotte,” Wooten said as she walked past the arena on her way to Central Piedmont Community College, where she’s working toward her high school diploma. “I hope he doesn’t get a second term, because he hasn’t done anything for poor people.”

In order to have a protest, you have to have a place to sleep. We’re soaking up all the hotel inventory. Where are they going to sleep? I’m just not worried about it.Richard Porter, Republican National Committee member​
But commercial painter Eric Smith, 58, said it was only fair for the city to host Trump now after having hosted Obama seven years ago. “He is the president,” he said, sitting on a low wall outside an office tower, flecks of white paint covering his hands and shoes. “I think it’s going to be good for the economy.”

Smith voted for Trump in 2016 after not having bothered to vote in the previous two elections. But two and half years of Trump’s words and behavior have been more than enough for him to decide that he will not vote for the president again. “He’s a narcissist,” Smith said. “And probably a sociopath … He should learn to keep his mouth shut.”

One lifelong Charlotte resident, who works in a city-funded enterprise just blocks from the arena, said she worries that Trump’s renomination will further bring out violent racists — the sort who converged on Charlottesville two years ago. The clash sparked by the neo-Nazi rally left one counterprotester dead after a white supremacist ran his car into the crowd.

“I’m afraid something really bad is going to happen,” she said on the condition of anonymity for fear of losing her job. “It makes us look bad, also.”

Porter, the RNC member from Illinois, said he has only been impressed by the city and its leaders, and believes Republicans will have a great convention. As for protests, he said people have little to fear.

“In order to have a protest, you have to have a place to sleep. We’re soaking up all the hotel inventory. Where are they going to sleep?” he said. “I’m just not worried about it.”

This has been updated with comment from Ed Driggs.