Dark and Lightskin Dilemma in Africa - Copied from Quora

#1
I have a bone to pick with the black community. All of them. Young and old.

I am a black girl who grew up in a black community. I went to a black school. All my school mates were black. My whole family - black. Friends - black. Random people on the street - black. Not mixed. Black.

When I was younger, I grew up hearing adults always gushing over light skinned girls. Girls, not boys. Girls. All the adults around me always treated the lighter-skinned black girls as if they needed extra care and attention, always checking to see if they were fine. Always doing their best to make sure all their needs were met.

The teachers in class would constantly check on them. “Linda, are you OK, love?”

This would be right in the middle of a lesson. “Do you perhaps need to step out and get some air? Your cheeks are so pink! Look at you!”

The pink cheeks or any other part of the skin was valued! It made them somehow special! Even they knew and would constantly make comments about it.

“Oh, my skin is just so white that even the smallest things make it go all red!” Then there'd be that “Oh, I'm so adorable with my light skin” laugh.

They'd then make jokes about the darker-skinned people and how you couldn't even see them blush because their dark skin ate up all the pink.

Trevor Noah once made a joke about how sometimes his grandmother wouldn't hit him because she was scared his skin would get all pink. We laugh about it, but that's the reality. It was slightly easier to get away with things for the lighter-skinned kids because it was mostly brushed off as adorable. Or because they bruised, I don't know.

Now, as a darker-skinned girl, I never noticed this at the time. This is because it's something I grew up hearing. OK, I did notice it, but even then it's something I brushed off as being part of life. I knew that even though I wasn't of a lighter shade, my teachers still liked me because I got good grades. I just always told myself that as long as I worked hard, I'd always matter.

There were always comments being made in passing that stuck to me.

We'd see a dark-skinned girl who was bold enough to experiment with bright colours in her hair. Immediately people would talk about how dark skinned people should just stick to darker colours, preferably black, because the clash between the bright colour and their skin was ugly.

The comments would be the same when it came to clothing, too. A dark-skinned girl wearing a yellow outfit in public would be the topic of many gossip sessions.

“Did you see her? What's she trying to do? You know, when you're black (dark. We’re called black for emphasis on our skin tone) you should stick to things that suit you. She thinks she's pretty, hey.”

Thing is, it would be someone close to me who'd say this. Sometimes it would be a dark-skinned cousin who'd grown up with those comments drilled into her that she'd accepted and was now part of the people that taught other dark-skinned girls how to “know their place.” Sometimes it would be a light-skinned cousin who made these comments and laughed about it, then tried advising you, her dark skinned cousin, to never embarass yourself in public like that. Despite who said it, they all thought they had your best interests at heart.

For a while, I was the dark-skinned aunt. I didn't comment, but when someone laughed, I'd laugh too, because how dare a dark skinned girl be that bold and confident and go against society?

I remember seeing a dark-skinned girl in high school who'd dyed her hair blonde. I had those negative thoughts. Why would she choose such a bright colour? Why not dye her hair maroon or a very dark brown? She was dark-skinned, she should've just stuck to black.

A few weeks later, I remember being in awe. She was so confident and the hair looked so good.

I would finally gain that level of confidence a few years later, thank The Lord.

When my confidence started growing, I came across a lot of black people who did not seem to understand why I was confident. I met dark-skinned women who were still living by those standards who didn't understand why I was wearing crop tops. Not just because they were revealing, but because they were revealing more of my dark skin that I wasn't supposed to be proud of.

A few months ago, I met a girl who asked me what kind of guys I like, and my response was, “Well, I like everything cause I don't have a type really, but I do like dark skinned guys. Like, dark dark.”

She responded,”Girl, no. You're dark skinned. You can't date another dark skin. You have to think about your kids You don't want dark-skinned kids running around, do you?”

She was actually dark skinned as well. Slightly darker than I. Her boyfriend was light-skinned and she had a light-skinned baby. Every time someone commented on her baby's beautiful light skin, you could literally see the glow in her face and her eyes would sparkle. You'd sometimes find her holding her baby and just saying, “My beautiful yellow bone (light-skinned person).”

We always see these cheesy “dark skin is beautiful” quotes on social media, yet when people actually see a confident dark-skinned woman in real life, they immediately feel uncomfortable. It's as if dark-skinned women are only beautiful when they're on a screen. Not right in front of you.

My point is, what‘s the point of posting a quote about how beautiful all skin tones are on Instagram, when you constantly make comments in front of your dark-skinned niece about how she should stick to certain colors because of her skin tone? When you teach your light skinned baby sister that she's better than the darker skinned girl because she's lighter?

Social media can only do so much. It's our communities that need to change.

Instead, the other kids in school will diss you by saying, “You're just as black and ugly as that Lupita of yours.”(I say this because I was called just as dark and ugly as Alek Wek. LOL.)

Anyway, I just needed to vent. I have nothing against people of lighter shades, just with the people who raised them. More with those who raised some of them to think they were the “better black girl.” I also have a problem with the people that helped raise us darker-skinned people and taught us to feel bad for thinking we were beautiful.

I'll leave you guys with this picture of me with blonde-ish, white-ish hair and wearing bright colours. I'm wearing yellow these days too. And orange. 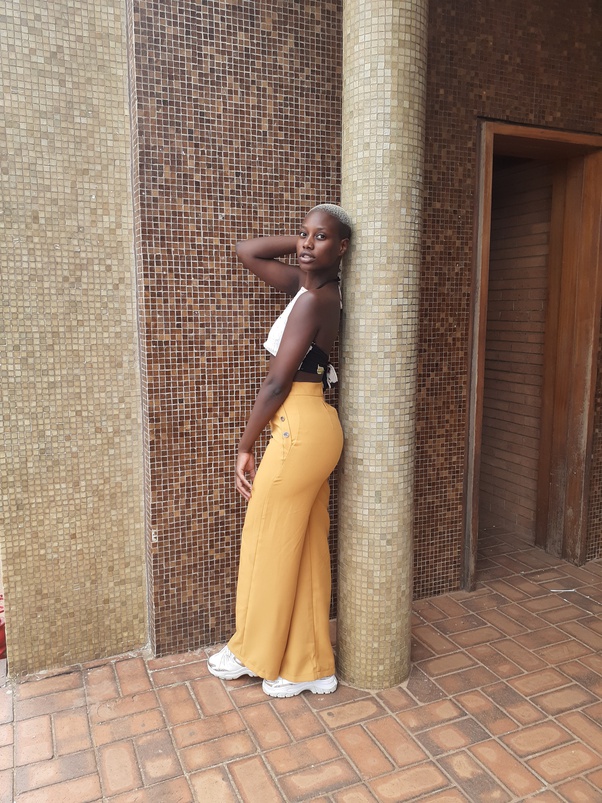 Edit: I'd like to clarify that in South Africa, mixed race people and fully black people are considered two different races. When I talk about light-skinned black people, I don't mean someone who's a mixture of black and white. I mean a 100% black person of a lighter shade.

Last update: I just remembered a story they used to tell us when we were younger about a rabbit and a baboon. The story talks about how the baboon had super-dark babies while the rabbit had beautiful, light-skinned babies. So the baboon stole the rabbit's babies and replaced them with his supposedly ugly black ones. At the end of the story, once the babies are back with their original parents, the baboon's punishment is to be stuck with his ugly, super-black babies.

Honestly, this has been around our entire lives. These were our bedtime stories.
D

#7
I have just schemed through that.These things do happen but from by experience,black people who believe in them got low IQ,even try and remember the dumbest people in class....they were all light skin.

Also,from by experience,the best pussies are with dark girls.