#1
In ancient time, there wasn’t any copyright law. Everyone just learnt to copy freely from better ideas available at the time to improve. Its not until the West capitalism rise to top from industrialization just few centuries ago, West invented the patent system to ensure their leading advantage.

But who invented most of the things prior to West civilization?

So Europe developed by copying from the rest of the world (gunpowder, paper, printing press. etc), then US copied Europe, Japan copied US-EU.

Over last 40yrs, US has mutated its IP copyright system to become a powerful tool where big US corps with vast legal resources will patent every single thing to suppress & extort any weaker corps/nation through complex IP system & costly lengthy law suits, backed by US sanctions.

China realized its late comer disadvantage after joining WTO, every tiny basic technology, design, pattern, name, & logo are already patented by G7 to claim royalty, you can't create much new thing without violating one. And you have to very diligently verify if your design violate any of their numerous complex patents to avoid costly law suits. This system was designed to kill any innovation for late comers like China, Asia and many emerging economies .

But all this is changing:
1)

Offices located in Asia received 65.1% of all patent applications worldwide, 15.4% more than their share in 2007. China has led this growth, accounting for two-thirds of the applications filed.

2)
US patent system has several horrible flaws that really compel innovators to move to China, because China has made great strides with their patent system.
True small innovators are under attack by domestic big US companies that get away with infringement. Laughable protection for the little guy. Small innovators are actually seriously considering to patent in other countries.
3)
Domestic patent trolls have done far more damage to the United States economy than any domestic or foreign terrorist organization in history every year, with multiple frivolous lawsuits directed at unsuspecting businesses (not just small inventors getting hurt). You don’t hear about them that much because these businesses have to sign a NDA after settlements. It has outright killed several businesses and forced some businesses to fire employees and dedicate years of resources to focus on fighting frivolous lawsuits. 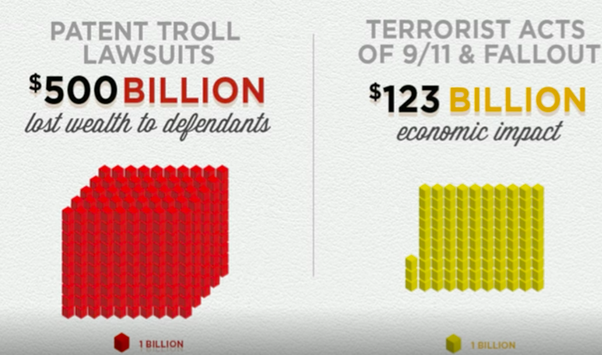 Uniloc sued Rackspace merely by selling Linux-based servers has seen its case thrown out:
“A method for processing floating-point numbers, each floating-point number having at least a sign portion, an exponent portion and a mantissa portion, comprising the steps of: converting a floating-point number memory register representation to a floating-point register representation; rounding the converted floating-point number; performing an arithmetic computation upon said rounded number resulting in a new floating-point value; and converting the resulting new floating-point register value to a floating-point memory register representation.” Source: Uniloc Complaint
That essentially means that Uniloc is suing Rackspace for installing Linux on their computers, because in layman terms: Linux does math by rounding numbers. It’s a nonsensical lawsuit, you shouldn’t be able to patent a simple math function, just as much as attempting to patent the idea of the wheel. But then, the patent examiners only have a few hours to review every single patent so these “dumb patents” go through.
The only reason the lawyers would attempt this is because most judges aren’t familiar with Linux. These judges would probably be somewhat familiar with Windows or MacOS but not Linux at all. A patent lawsuit can run millions of dollars and some smaller companies just cave in to the high level “racketeering”.
There are many cases where the patent troll doesn’t actually create any products, like publicly traded Marathon Patent Group (well, now they recently have decided to mine cryptocurrencies, possibly to avoid being classified as an investing company while still earning high returns and looking “innovative”). These “patent groups” just buy up patents for cheap and sue. They aren’t really innovating but extracting legal fees through “extortion”.
The returns are really good, and even George Soros and the hedge fund crowds are one of the biggest investors in this business model, because the risk-return profile of making shell LLCs (it costs about a few hundred in Texas), sending lawsuits to vulnerable businesses (a few hundred each suit with lawyers on contingency fees for “guaranteed return”) and collecting a 500k settlement is so strong, there is no reason why not.
As for China, their patent system is actually much more effective and fair. Parties are very much encouraged to conduct good faith negotiations before a lawsuit. Then technical discussions. If infringement is shown, they communicate with each other to establish value and structure a licensing agreement. Since there is a high likelihood of injunctive relief (not in the US), the negotiations are highly incentivized. US courts don’t care about negotiations and a patent owner is actually incentivized not to initiate any negotiations before filing a lawsuit. The cost of a suit in China is ~$250k for each and completes in less than 10 months, while US patent litigation can cost millions and last 5+ years.
Low cost, speed, and injunctive relief all contribute to China being a highly favourable spot. Foreign plaintiffs find China as a preferred venue for patent litigation. If the patent granting and litigation trends continue, it’s not that China is stealing the innovation from the US, but China will become the innovator over time through homegrown technology.
China increasingly a preferred venue for patent litigation, even for US patent owners - IPWatchdog.com | Patents & Patent Law
The staggering number of patent applications (and subsequently patents) in China vs US: 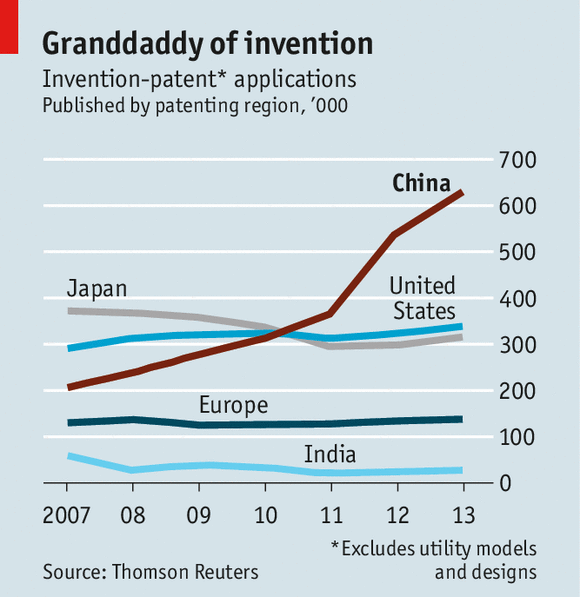 Top venture capitalists like Jim Breyer in Silicon Valley are already actively looking to fund innovative Chinese startups in China as well. You can see the list of Chinese investments in IDG’s Capital’s portfolio. These venture capitalists have realized early on that without a meaningful patent, there is no collateral for the investment. China already outpaces the US in AI startup funding. 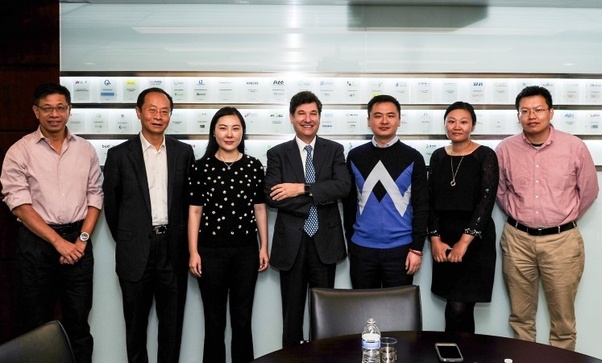 If this continues and our country doesn’t actually address it’s own problems, and simply blames it on others, I’m actually worried the US will continue to fall on innovation. People have been complaining for a long time, but the patent lawyers have won almost all the lobbying efforts. There have been minor changes that are in the right direction, but I fear it’s not enough. It’s gotten so bad, the US has recently dropped out of the top 10:
The U.S. Drops Out of the Top 10 in Innovation Ranking (Bloomberg)
Perhaps the “American Dream” will be replaced by the “Chinese Dream” soon. China already invites qualified innovative talent with startup funds and personnel support to move to China for Made in China 2025 key technologies, while the US is cutting research funding and indirectly discouraging inventors and businesses to innovate through flawed patent laws.


In another decade 60% of technology will consist of new patents, what will happen then? Will the US pay royalties diligently like the rest of the world currently does to them?
From a World total $329 billion,
US inventors, and other IP holders brought in $128 billion, or about 39 percent of the total.

The clear answer is NO.
https://www.reuters.com/article/us-...bio-targets-huawei-over-patents-idUSKCN1TI2T3
U.S. Senator Marco Rubio filed legislation on Monday that would prevent Huawei Technologies Co Ltd from seeking damages in U.S. patent courts, after the Chinese firm demanded that Verizon Communications Inc pay $1 billion to license the rights to patented technology.

Under the amendment - seen by Reuters - companies on certain U.S. government watch lists, which would include Huawei, would not be allowed to seek relief under U.S. law with respect to U.S. patents, including bringing legal action over patent infringement.

Ladies and gentlemen welcome to a future world where patents will become worthless pieces of papers, when china surpasses the US and america refuses to pay royalties. 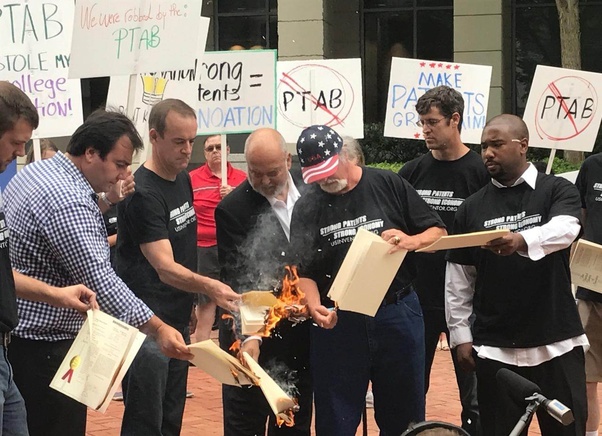 They are burning their patents. The patent holder that raised $1 million dollars on Kickstarter for Bunch O Balloons is the second man on the right

#7
Furthermore a simple Google search will tell you that as early as 500BCE the Greeks in a City called Sybaris were already registering patents :

Haven't you ever asked yourself why Kenya has no innovation at all. Ni juu ukiunda hata kakitu kadogo kataibiwa tu uwachanishwe hapo.

Starting with your very own MAASAI shukas, beadwork, artwork etc.

#8
Kaperemende totally overshot the point because knee-jerk instincts kick in before the lightweight brain can warm up.

Patent trolling is a recognized economic and ethical problem in the USA.

It's not about protecting IP, as the litigants do not invent, register or manufacture anything. They bully and extort.