Only President Uhuru Kenyatta’s signature stands between MPs and their quest for a good life facilitated by a raft of contentious allowances.

This is after lawmakers sneaked in amendments to the Parliamentary Service Bill, giving themselves a blank cheque in their demands for first-class treatment.


In the proposals passed on Wednesday last week, the lawmakers made it clear they did not intend to lack anything, stating that what was not in Parliament would be outsourced.


An enabling legislation for PSC will strengthen MPs' hand in demanding better perks, as the proposed law mandates their employer, Parliamentary Service Commission, to set "minimum standards for travel and accommodation and to regularly review the domestic and international travel allowances applicable for members and staff of Parliament."


This is the provision they intend to exploit to confer MPs a raft of allowances, including the Sh250,000 house allowance and Sh18,000-Sh24,000 night allowance.


They also demand to be treated like parliamentarians in other jurisdictions who enjoy better facilities and treatment.


The lawmakers put it in the proposed law that the PSC shall pamper them, lightening the burden on committee chairs who have been lobbying for better treatment for members.


If the President signs the Bill into law, the MPs will be entitled to a room for visitors, bevy of researchers, uninterrupted internet connectivity and a room for parliamentary parties to caucus.

This is in addition to other demands such as continuous training for members, locally and abroad.


Although PSC is recognised in the Constitution, it has no supporting legislation, disadvantaging members in pushing for their interests.


It is this lacuna that the MPs sought to cure through the Bill, but in doing so, they made sure their interests were put down in specific terms, away from the generalities in Article 127 of the Constitution that "the commission is responsible for providing services and facilities to ensure the efficient and effective functioning of Parliament…”


The President’s signature will also give MPs greater leverage in pushing for some of their pending demands, among them the provision or outsourcing of a gift shop where they can buy presents, and the deployment of a public health specialist in Parliament.

These were some of the demands in a report of the National Assembly Committee on Members Services and Facilities.


The Bill also proposes a specialised parliamentary police unit and facilitation for members to conduct public hearings in their constituencies.


Contributions on the floor of the House pointed to what the MPs wanted to achieve through the new law.


“It is very sad and shameful for Parliament to have a commission which does not have an Act of Parliament that can be used for its operationalisation… We must have parliamentary parties’ caucus rooms, so that when we want to caucus as Jubilee, there must be a designated caucus hall where our party leader can walk in instead of the idea of going to our party headquarters,” said the committee chair.


“There must be outsourcing and a Java within the precincts of Parliament. If I do not want to eat in the Parliament restaurant, I can get fast food. So, this Bill is important for the commission to have powers to ensure that the facilities are up to standard as in other jurisdictions," said Duale.

Other MPs were angry that they had not been treated with the respect they deserved.


“We need to ensure Members of Parliament, not that they should be over-provided for, but are not reduced to a level where they cannot represent the people who elected them for the reason that they cannot even fend for themselves or cannot move around and be seen like people who are here by mistake,” said Jeremiah Kioni (Ndaragua).


Wilberforce Oundo (Funyula) claimed the facilities in Parliament were below his expectations.


“When I came here, I thought I was coming to paradise. But when I landed, reality sank that what I expected is not what I got. I hold the National Assembly with such exalted status. I expected things to move smoothly, be organised and services to be in an extent far much better than what we had elsewhere,” said Mr Oundo.


“Sorry, but we will not be cowed or ashamed in doing the right things. What Parliament has done today is the right thing. Therefore, I hope and pray that once His Excellency the President assents to the Bill, it will see a transformative improvement in service delivery and the image of Parliament,” said Adan Keynan (Eldas).

#2
How the electorate are feeling right now.

Ouagadougou, Burkina Faso, is the scene of mass protests, flames, and tear gas after citizens organized in the capital to show their disdain for President Blaise Compaore, who has been the leader of his country for the last 27 years. Despite this lengthy reign, parliament is considering a constitutional amendment in order to lift the term limits that prohibit him from running for office or holding the presidency in 2015. The vote on the amendment has been suspended temporarily, but the citizens of Burkina Faso have nevertheless set both city hall and the ruling party headquarters on fire.

It started with an attempt Monday by hundreds of protesters to force a street vendor's trolley through the glass frontage of Hong Kong's parliament building.

In the locked interior of the lobby, dozens of police officers in full riot gear held the line for hours -- their colleagues occasionally dousing the protesters from above with pepper spray.

Time after time, the protesters attempted to ram the trolley through the entrance. It would give just a bit, the glass showing spider-web cracks.

The scene played out all day on television and social media -- on the 22nd anniversary of Hong Kong's handover to Beijing -- and TV also showed chief executive Carrie Lam earlier raising a glass of champagne as her colleagues sang the Chinese national anthem at a ceremony to mark the historic occasion.


The symbol of the defiance was a single anti-government protester spraying black aerosol over the Bauhinia flower that marks Hong Kong's flag and distinguishes the semi-autonomous territory from the mainland.

The scene Monday was the culmination of nearly a month of massive anti-government protests sparked by opposition to a proposed law that would have allowed extraditions to China.

Those protests, however, have spiralled into sometimes violent agitation against authorities, and the action has been met by police using rubber bullets, batons and tear gas.

"We know that this is breaking the law, but we have no choice," a protester surnamed Cheung told AFP.

"We have to show the government that we won't just sit here and do nothing," added another, who gave her name as Joey.

Once protesters had breached the glass doors of "Legco", as the local assembly is known, police withdrew further behind lowered aluminium shutters.

But the protesters got through those soon after, and swiftly took over the historic chambers. 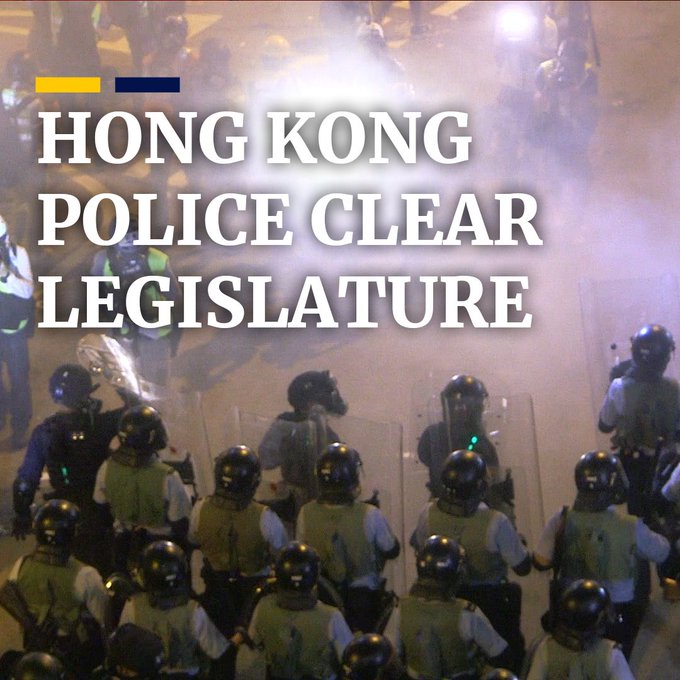 “Don’t leave anyone behind,” protesters yelled while grabbing their peers as #HongKong police moved in to clear the legislative complex, firing rounds of tear gas. http://sc.mp/2a7f6

Around 200 demonstrators, many wearing masks, broke through a police cordon and entered Macedonia’s parliament, attacking MPs in protest at the election of a new speaker despite a months-long deadlock in talks to form a new government.

The protesters stormed parliament on Thursday night after the country’s opposition Social Democrat party and others representing Macedonia’s Albanian ethnic minority voted for a new speaker. Shouting and throwing chairs, the protesters attacked MPs, including the opposition leader, Zoran Zaev.

Television footage showed Zaev bleeding from the forehead and other Social Democrat MPs surrounded by protesters waving national flags, shouting “traitors” and refusing to allow them to leave. Broken glass littered the floor and traces of blood were seen in hallways.


Police later fired flash grenades in an attempt to disperse protesters outside the parliament and clear the way for the evacuation of politicians still in the building.

#8
Its times like these I hate being a kenyan. The other day i was visiting a village and one chatty airport staff asks where i'm from ,and I said kenya,she chuckled and reminded me of the "unnacompanied baggage" dropped from the airplane gears onto a nearby housing estate, then she went on about the gold scandal,not forgeting our ramshackled politics ,karibu nimtukane but ju ya aibu nilikua zile za low key hehehe.

#9
kenyans need to watch this

#11
Kenyans are too mindful of their own daily personal challenges to be much involved in resisting this kind of arrogance from the political class unless it's other politicians with clout leading the resistance to such blatant thievery.
But currently all the pigs have their snouts deep into the feeding trough in unity.
Once they have had their fill, the divisions will re emerge perfectly timed for the 2022 elections and to re galvanize the voting blocks and for the umpteenth time gullible Kenyans will fall into line and fight their imaginary enemies all over social media on behalf of the politicians.
We are beyond prayers.
B

#12
It's is a time like this that spear posts about jubilee development.

#13
Mawaya said:
But currently all the pigs have their snouts deep into the feeding trough in unity.
Click to expand...
when its coming to passing this bill all 350 of em will be in bunge, lakini when its a bill concerning @WANJIKU getting the magic 220 number is very hard
we are rudderless and our leader is clueless.
we are gonna crash.
B

#14
Meria Mata said:
when its coming to passing this bill all 350 of em will be in bunge, lakini when its a bill concerning @WANJIKU getting the magic 220 number is very hard
we are rudderless and our leader is clueless.
we are gonna crash.
Click to expand...
@wajiku is speaking for herself, and soon kitaeleweka.

#15
Bhai said:
@wajiku is speaking for herself, and soon kitaeleweka. View attachment 247168
Click to expand...
hii yote ni mikora, hakuna Wanjiku hapo.
A fearless leader is among us, he is waiting for the optune time to emerge and lead us to salvation. its gonna be painful

#19
Doc Oga said:
They are actually much worse than the kieleweke and Tanga Tanga wings
Click to expand...
Political rejects who want a piece of the pie.
ata hao wanamuziki are unknown, hakuna mtu wa kuvuta crowd hapo.
hawawes kanyanga kiambu and they know it, YT2 got a dose in Githurai 45 hajarudi huko sasa.
Wanjiku is tired
B

#20
Meria Mata said:
Political rejects who want a piece of the pie.
ata hao wanamuziki are unknown, hakuna mtu wa kuvuta crowd hapo.
hawawes kanyanga kiambu and they know it, YT2 got a dose in Githurai 45 hajarudi huko sasa.
Wanjiku is tired
Click to expand...
They started in ruiru next week wako Mombasa
You must log in or register to reply here.
Share: Reddit Pinterest Tumblr WhatsApp Email Link