#1
Kindly get out of this thread if it offends you. 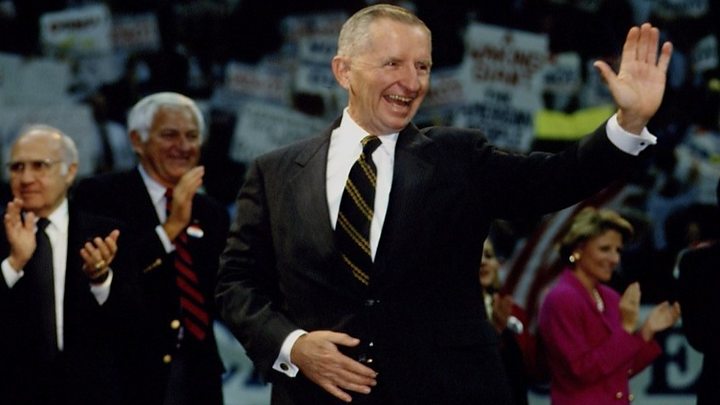 Media captionTexas billionaire and political outsider Ross Perot said he had lived the American Dream
Texan billionaire Ross Perot, who twice ran for US president as an independent, has died aged 89, his family says.
Described as idiosyncratic and feisty, he pioneered the computer data industry by founding his own company in 1962.
But he was best known for running in the 1992 campaign, advocating balanced budgets and calling for an end to the outsourcing of jobs abroad.
Democrat Bill Clinton won the three-way race, in which Mr Perot took almost 19% of the vote.
Incumbent George HW Bush was defeated. 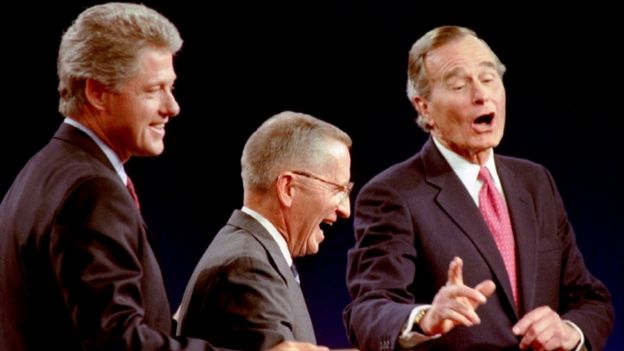 Perot ran for president again in 1996, after forming the Reform Party. He was diagnosed with leukaemia earlier this year.

"Ross Perot, the ground-breaking businessman and loving husband, brother, father and grandfather, passed away early Tuesday at his home in Dallas, surrounded by his devoted family," the Perot family said in a statement.

H Ross Perot was an American original. A self-made billionaire with a penchant for plain-speaking in his clipped north Texas twang, he built a reputation as a savvy technology entrepreneur and spent a small fortune helping US veterans and attempting to free American hostages abroad.

He was also a political harbinger.

His 1992 independent presidential bid - the most successful third-party candidacy in eight decades - exposed fault lines in the US political system that would some day result in electoral earthquakes. He capitalised on the thirst of American voters for an outsider who could disrupt two-party government and built a dedicated following with his populist, small-government, anti-trade, anti-globalist rhetoric.

His unconventional candidacy, announced on a US talk show, straddled the line between entertainment and politics and contributed to the defeat of incumbent Republican President George HW Bush.

Although his second presidential bid in 1996 faltered and the Reform Party he founded crumbled once he scaled back his involvement, the ideological themes he built it on would later be adopted by Donald Trump to bring the establishment of the Republican Party as it existed for decades crashing down.

Born in 1930, during the Great Depression, Perot grew up in poverty. He began his technology career working in sales for IBM, before founding Electronic Data Systems (EDS) in 1962, at the age of 32.

The company made him rich. In the 1980s he set up Perot Systems which was eventually acquired by Dell for $3.9bn.

As an employer, Mr Perot was known for his quirks - particularly his strict dress code. Workers had to wear white shirts and ties, and beards were banned.

When two of his employees were jailed in Iran in 1979 over a contract dispute - just before the Islamic revolution - he financed a private commando rescue in a raid that inspired a book and a film.

He championed patriotic causes, and in the late 1970s and 1980s claimed that hundreds of missing US soldiers had been left behind and imprisoned after the Vietnam War.

The 1992 campaign - during which Perot spent $63m (£50m) of his own money - made him a household name. At one point in June that year, he had a lead over both his mainstream rivals. Perot finished a strong third in the November election.
His second campaign in 1996 was less successful. He did not take part in presidential debates and got just 8% of the vote.

#3
Did he do anything good for humanity? For black people? For Africans? For East Africans and For Kenyans?

And if not then he will be amongst the other wealthy people that died and the world will forget them.

#4
Kwame the God said:
Did he do anything good for humanity? For black people? For Africans? For East Africans and For Kenyans?

And if not then he will be amongst the other wealthy people that died and the world will forget them.
Click to expand...
Eff off! Don't you know how Google ?

One day death will also die.

#6
Amused said:
Eff off! Don't you know how Google ?
Click to expand...
Why are you so emo? were you related to him?