Humans landed on the moon 50 years ago today

#1
The Apollo 11 moon landing changed our understanding of the solar system.
By Brian Resnick@B_resnickbrian@vox.com Jul 19, 2019, 12:00am EDT
Share this story
SHARE 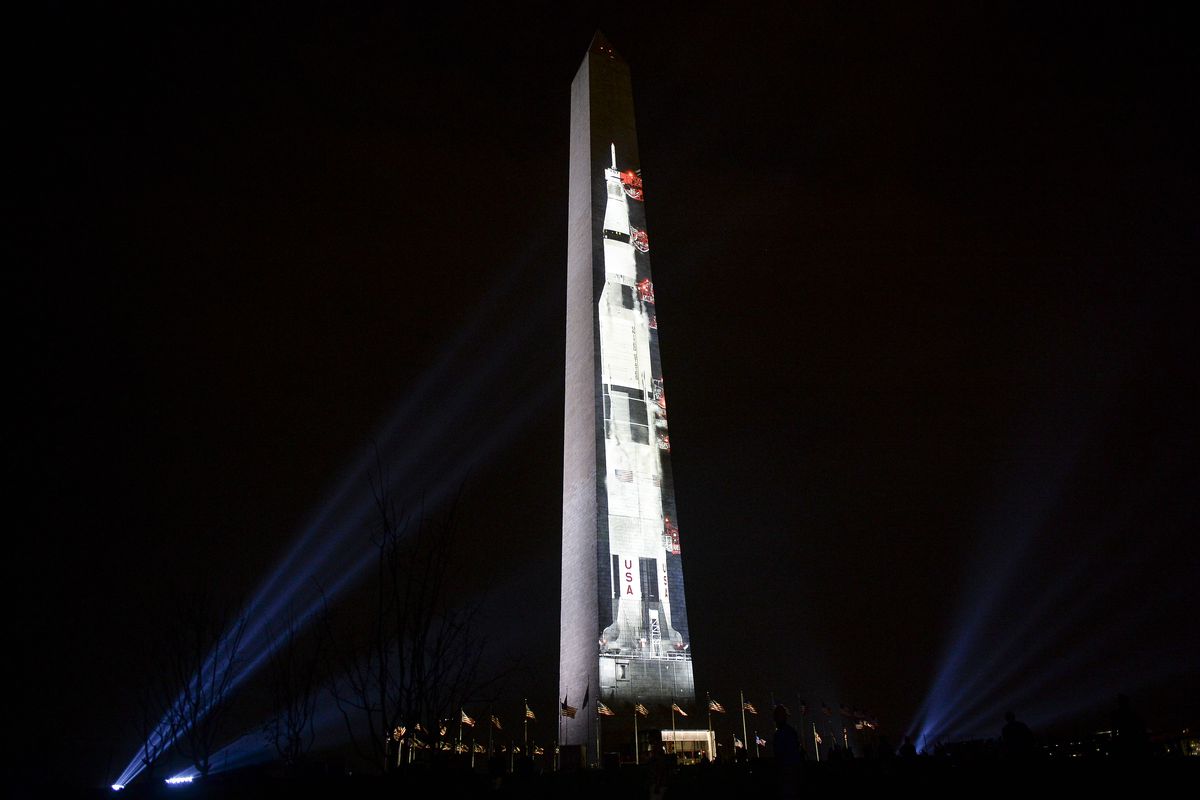 The image of a Saturn V, the rocket that sent Apollo 11 into orbit on July 16, 1969, projected on the Washington Monument. Caroline Brehman/CQ Roll Call
Fifty years ago, human beings stepped on the moon for the first time. Some 650 million people around the world watched the historic landing on July 20, 1969, and heard astronaut Neil Armstrong say “... one small step for a man, one giant leap for mankind.” Fittingly, there’s a Google Doodle celebrating the anniversary this weekend. Even cooler: An image of the Saturn V rocket that propelled the astronauts to the moon is being projected onto the Monument during the nighttime, culminating in a video projection on Friday and Saturday.
All the fuss is well deserved: The legacy of that mission — and all the Apollo missions — is immense.
For one, it was a huge engineering accomplishment to get humans to the moon and back. “It took around 400,000 people to land humankind on the moon,” astronaut Michael Collins, Apollo 11’s command module pilot who did not land on the surface of the moon, reminds us in Google’s commemorative Doodle video. Those were engineers, coders, scientists, mechanics, doctors, and so many more professions working in concert to make the mission a success.
The astronauts were launched aboard the largest rocket ever built, the Saturn V. Once launched into space, they then had to essentially reassemble the spacecraft mid-flight to the moon. Then, that spacecraft had to enter orbit around the moon. There, Buzz Aldrin and Armstrong boarded a lunar lander, and descended to the surface, where they spent 21 hours and 26 minutes. After, they had to come back.
Check out the annotated description of the journey in this video. Nothing about this was easy.

But it was more than just an engineering victory. Bringing back samples from the surface of the moon led to many stunning discoveries, and new hypotheses about the history of our solar system.
“Before Apollo, we really did not know how the moon formed,” says Juliane Gross, a planetary scientist at Rutgers University.
For planetary scientists, research on lunar samples is invaluable. Moon rocks serve as a time capsule of the solar system.
From this time capsule, we learned that the moon was likely formed when a giant Mars-sized object slammed into an early version of the Earth, forming the moon out of an ocean of magma left in the wake of the cataclysm. And there’s still more to learn if we were to go back.
But if humans are going to become an interplanetary species, with outposts on the moon and Mars, we’re going to have to learn to live in space. The moon, just a three-day’s journey away, is a great place to do that. We could also use resources on the moon — like water, trapped in ice, which exists on the moon — to help supply those missions.
NASA is working toward establishing a more permanent human presence on and around the moon. The mission is called “Artemis,” after the Greek goddess of the hunt and the moon, who is also the twin sister of Apollo. It’s a fitting name, as NASA Administrator Jim Bridenstine has promised that the mission will deliver the first woman to the moon. All the Apollo astronauts in the 1960s and ’70s were white men.
The Trump administration wants NASA to land humans back on the moon by 2024. It also wants to send up a space station — called the Gateway — to orbit the moon and serve as a launching ground for missions to the lunar surface. It would be reusable and nimble: NASA could change its orbit to pass over any location on the moon. But we’ll see about that: The accelerated effort still needs to secure funding, and the rocket intended for the mission continues to be plagued by delays.
So there’s a lot of work to do. But there’s still a compelling case to go back. NASA has its eyes set on sending humans to the lunar South Pole, which contains one of the oldest, deepest, crater impacts in the solar system. Journeying there will give scientists a more detailed look into the history of the solar system. It’s all in service of the grandest question of all: Why are we here, and what had to happen for us to get here?

#3
@Meria:meffi: indicate one benefit accrued from this landing that benefits directly.

#5
It's Le Scumbag said:
@Meria Mata indicate one benefit accrued from this landing that benefits directly.
Click to expand...
hakuna coz they didnt land

Pampas are treeless grasslands in South America.
Could you be talking of pampers?

#9
Meria Mata said:
hakuna coz they didnt land
Click to expand...
Then why are you celebrating mediocrity?
S

Pampas are treeless grasslands in South America.
Could you be talking of pampers?
Click to expand...
Daipers zote ni Pampas

#12
It's Le Scumbag said:
Then why are you celebrating mediocrity?
Click to expand...
take the pole, acha kusumbua, can see you havent voted

#14
Meria Mata said:
take the pole, acha kusumbua, can see you havent voted
Click to expand...
There a pole? Pardon me sir,let go vote. Or not!
N

#15
It's Le Scumbag said:
@Meria:meffi: indicate one benefit accrued from this landing that benefits directly.
Click to expand...
Reallife applications of science, technology, engineering and math, leading to discoveries and innovations in space and here on Earth.
N

#16
I cannot imagine what it took to build the massive Saturn V rocket, the tallest and most powerful rocket ever built.
You must log in or register to reply here.
Share: Reddit Pinterest Tumblr WhatsApp Email Link