#1
Norwegian ship attacked by torpedo in the gulf of Oman

#3
Dubai, United Arab Emirates -- Two tankers were attacked Thursday near the strategic Strait of Hormuz, leaving one ablaze and adrift as sailors were evacuated from both. It was the second time in a month that tankers have been seriously damaged in the region, and again U.S. officials were quick to point the finger of blame at Iran.

A U.S. defense official told CBS News senior national security correspondent David Martin it was "highly likely Iran caused these attacks" on Thursday. The official dismissed an Iranian claim to have rescued the crews of both vessels in the Gulf of Oman as "patently false." He said the USS Bainbridge picked up 21 crew members. 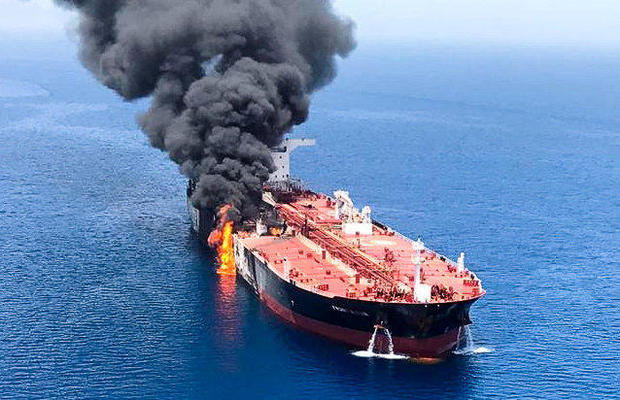 An oil tanker is seen after it was attacked at the Gulf of Oman, June 13, 2019. HANDOUT / REUTERS
Iran claimed it dispatched search teams that rescued 44 sailors from the two vessels.

The official told Martin he had seen reports that members of one of the tanker crews believed they were hit by a torpedo or a mine, but that he couldn't confirm those reports.

A U.S. official told Martin that American authorities expected to recover sufficient debris from the attacks to be able to trace them back to their source. The official said any retaliation from the U.S. would depend on the evidence found linking the attcks to Iran, and on the attitudes of other Gulf countries. After four tankers were attacked last monthSaudi Arabia had no appetite for retaliation. That has changed.

The Lincoln was making a port call in Oman. It has gotten underway. Don't know if it was scheduled to get underway or did so in response to attacks.

U.S. officials pushing back against Iranian claims to have rescued crew members. According to U.S. officials, the crewmen Iran "rescued" were given no choice about boarding an Iranian vessel. At last report, they were still in Iranian hands, so fine line between rescued and detained.

The attacks come amid heightened tension between Washington and Tehran, and the timing is senstitive; it transpired just as the Japanese leader was visiting Iran to try and rekindle diplomacy to ease the standoff. Japan's Trade Ministry said the two vessels struck on Thursday were carrying "Japan-related cargo." 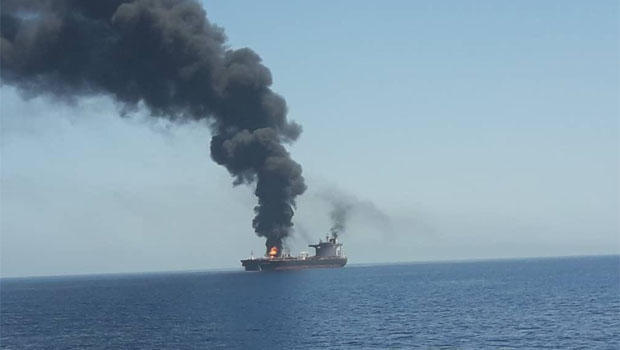 On Wednesday, after talks with Iranian President Hassan Rouhani, Abe had warned that an "accidental conflict" could be sparked amid the heightened U.S.-Iran tensions, which he said must be avoided. His message came just hours after Yemen's Iranian-backed Houthi rebels attacked a Saudi airport, striking the arrivals hall before dawn and wounding 26 people Wednesday.

Tensions have escalated in the Mideast as Iran appears poised to break the 2015 nuclear deal with world powers, an accord the Trump administration first unilaterally backed out of last year.

Khamenei, meanwhile, reiterated his regime's long-standing insistence that it does not seek to obtain nuclear weapons, but he added that "America could not do anything" to stop Iran if it did.

The latest incidents come after the U.S. alleged that Iran used mines to attack four oil tankers off the nearby Emirati port of Fujairah last month. Iran has denied involvement, but it comes as Iranian-backed rebels in Yemen also have launched missile and drone attacks on Saudi Arabia.

Benchmark Brent crude spiked at one point by as much 4% in trading after the reported attack to over $62 a barrel, highlighting how crucial the Strait of Hormuz is to global energy supplies. A third of all oil traded by sea passes through the strait, which is the narrow mouth of the Persian Gulf.

Cmdr. Joshua Frey, a spokesman for the U.S. Navy's 5th Fleet, said American ships were assisting the two vessels, which he described as being hit in a "reported attack." He did not say how the ships were attacked or who was suspected of being behind the assault. 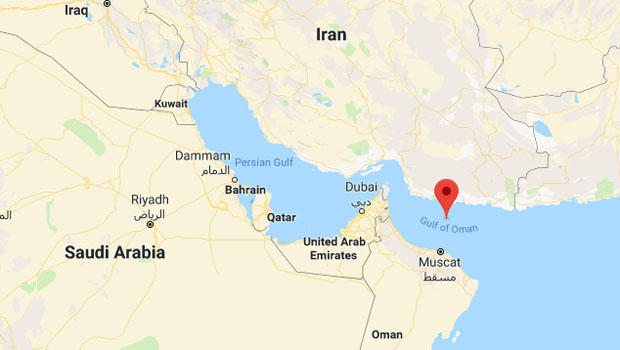 Gulf of OmanGOOGLE MAPS
The Norwegian shipping firm Frontline confirmed Thursday that one of its tankers, the Front Altair, was in flames after an incident in the Gulf of Oman, according to Reuters. It cited the Norwegian newspaper VG, which quoted a company spokesman. The spokesman said all 23 crew members were taken onto a nearby vessel.

Dryad Global, a maritime intelligence firm, said the Front Altair was "on fire and adrift."

Reuters also quoted a senior official of Taiwanese state oil refiner CPC Corp as saying the Front Altair, a tanker chartered by CPC to carry fuel from the Middle East, was apparently hit by a torpedo.

Front Altair had been loaded at a port in the Gulf with naptha, a petroleum product, and was on its way to the Far East.

Separately, a spokesman for BSM Ship Management told Reuters one of the vessels it manages, the Kokuka Courageous, was damaged in "a security incident" in the Gulf of Oman on Thursday. He said all 21 crew members abandoned ship and were quickly rescued, adding that the incident damaged the ship's starboard hull.

"The Kokuka Courageous remains in the area and is not in any danger of sinking. The cargo of methanol is intact," Reuters quoted the spokesman as saying.

Reuters reported that a shipping broker said there was an explosion "suspected from an outside attack" on the Kokuka Courageous – and it may have involved a magnetic mine. Japanese shipping firm Kokuka Sangyo, the vessel's owner, said it was struck twice in three hours, Reuters added.

The United Kingdom Maritime Trade Operations, a maritime safety group run by the British navy, first put out the alert early Thursday, giving coordinates for the incident some 25 miles off the Iranian coastline.

#5
For what reason would Iran torpedo Norwegian oil tankers ? Someone somewhere is spoiling for war.

#7
Kahuni Maisha said:
For what reason would Iran torpedo Norwegian oil tankers ? Someone somewhere is spoiling for war.
Click to expand...
The same neoconservatives who lied about Iraq having WMDs so as to attack that country are the same devils doing this mess.
I'm hoping Russia will camp in Tehran and say "No Satan, you will not ruin one more nation"

#10
Tom Bayeye said:
alafu utaskia trumpoholics wakilia hakuna kitu kama hio. its a known fact,US is coaxing saudi into pissing off iran to have probable cause to "give freedom" to iranians,putin hatakubali hiyo hekaya
Click to expand...
Plus Iran has been mature all along. Iran is powerful and can whop Saudi's ass anytime if US withdraws it's support. Saudi Army has the latest equipment but it's Army is inexperienced. Iran on the other hand has great equipment and the Army is composed of battle hardened motherfuc*kers.

#11
Iran did nothing of the sort. The US said Sadam Hussein had WMDs and flattened Baghdad, Mosul, Tikrit, Falluja etc with civilian casualties nearing a million. And still hanged Sadam, for WMDs he did not own.
Last edited: Jun 13, 2019
K

#13
Kahuni Maisha said:
For what reason would Iran torpedo Norwegian oil tankers ? Someone somewhere is spoiling for war.
Click to expand...
Heeeee...this comment just threw me back to a video I saw last evening on youtube (channel: Biographics) that highlighted the life of a German officer, Heinrich Muller, the leader of The Gestapo (The German Nazi's police during Hitler's reign). According to the info from that clip, Hitler really wanted to invade Poland but couldn't coz they (the Polz) never gave him a good enough reason to. So Mr. Muller here hitched up a plan that made it look like the Polish peeps invaded/attacked Germany & what we know of WWII started from this. Not to point out fingers, but the way US has been dealing with international "issues" in our times does give rise to such suspicious deeds.
U

#14
shocks said:
Japanese anambiwa akae mbali na Iran. Uncle Sam will enforce hizi sanctions by force if necessary
Click to expand...
But nobody wants that,even US,if Iran can't sell oil,they will threaten to close down the strait. First Iran has the capability to block that strait for years on end, it will take at least a year or more before building alternative overland routes, and Democrats are unlikely to fund a war. Plus US public is tired of wars.
The tyranny of costs favors Iran, a mine costs a few thousand dollars, clearing it costs millions.
U

#15
Yunomi said:
The same neoconservatives who lied about Iraq having WMDs so as to attack that country are the same devils doing this mess.
I'm hoping Russia will camp in Tehran and say "No Satan, you will not ruin one more nation"
Click to expand...
why would they do that? chaos favours Russia. Oil prices go up,Putin replenishes his reserves that got depleted post 2014, supplies weapons to Iranians thereby dragging the conflict further and draining US treasury. Mzito likes things where they are headed.
B

#16
shocks said:
Uncle Sam will enforce hizi sanctions by force if necessary
Click to expand...
Sanctions ama fistfight? They have imposed harsh santions but Iran has somehow survived or has gone around the sanctions and this has really pissed off Bolton and Trump. Sasa wanataka kuanza aerial bombings. Watashangaa sana kupata Iran with S-500s

#17
Budspencer said:
Sanctions ama fistfight? They have imposed harsh santions but Iran has somehow survived or has gone around the sanctions and this has really pissed off Bolton and Trump. Sasa wanataka kuanza aerial bombings. Watashangaa sana kupata Iran with S-500s
Click to expand...
Iran is one funny country. It has been sanctioned to the neck and it's still surviving. For sure if US attacks Iran the world wont be silent. Hio nchi imepitia mengi.

#18
USA is the worst terrorist nation on Earth. This is their dirty work. False flag operation

#19
Baby Panay said:
Iran is one funny country. It has been sanctioned to the neck and it's still surviving. For sure if US attacks Iran the world wont be silent. Hio nchi imepitia mengi.
Click to expand...
Even North Korea has been even worse hit by sanctions and they still survive, I think it's more about unmet potential rather than survival, I mean even drc is surviving somehow despite all.

#20
This goes to show the importance of a world police or bully, without that the international waters will turn chaotic, every ship will need the mother country navvy to be escorting it around, hii Mambo ya global trade can become a very tricky affair.
You must log in or register to reply here.
Share: Facebook Twitter Reddit Pinterest Tumblr WhatsApp Email Link