#3
gashwin said:
why? by who?
Click to expand...
By Gibraltar, British colony.. coz they were sling oil to Syria
Britsh high commissioner summoned, by Iran.. 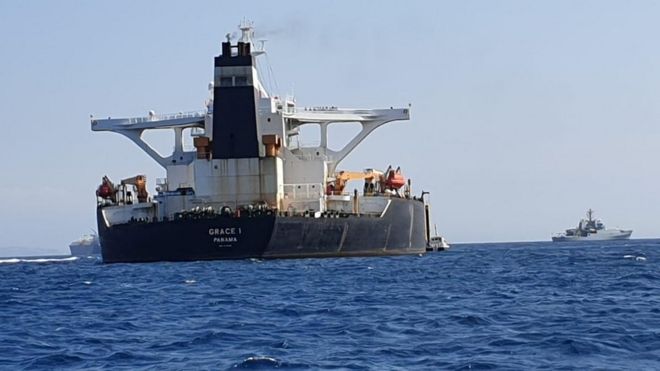 Image copyrightREUTERSImage captionThe oil tanker is suspected of carrying crude oil to Syria
Iran has summoned the British ambassador in Tehran to complain about what it says was the illegal seizure of an Iranian oil tanker.
British Royal Marines helped the authorities in Gibraltar seize the ship because of evidence it was heading to Syria in breach of EU sanctions.
Spain's acting foreign minister said the seizure of the ship - Grace 1 - was at the US's request.
An Iranian foreign ministry spokesman called the actions a "form of piracy".
The UK Foreign Office dismissed that as "nonsense".
Gibraltar port and law enforcement agencies detained the super tanker and its cargo on Thursday morning with the help of the marines.
The BBC has been told a team of about 30 marines, from 42 Commando, were flown from the UK to Gibraltar to help, at the request of the Gibraltar government. 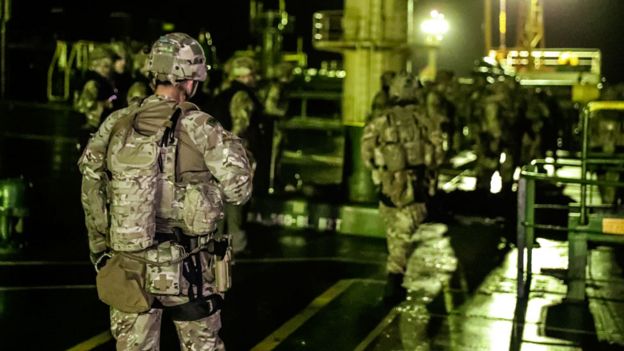 Image copyrightMINISTRY OF DEFENCEImage captionRoyal Marines disembarking Grace 1
The first marines to board the Panama-flagged ship descended by rope from a helicopter, as others approached in speed boats. No shots were fired.
A defence source described it as a "relatively benign operation" without major incident.
However, Iran's foreign ministry spokesman Abbas Mousavi was later quoted as saying the UK's ambassador in Tehran, Robert Macaire, had been summoned over the "illegal seizure" of the tanker.
In a brief interview for Iranian TV's Channel Two, Mr Mousavi said the seizure was "a form of piracy" and did not have any legal and international basis. He called for the tanker to be immediately released to continue its journey.
He added that "the move indicated that the UK follows the hostile policies of the US, which is unacceptable for the Iranian nation and government".
BBC defence correspondent Jonathan Beale said while Britain has been keen to suggest it was an operation led by the Gibraltar government, it appears the intelligence came from the US.
Spain's Acting Foreign Minister Josep Borrell said Spain was studying the circumstances of the action but said it followed "a demand from the US to the UK". Spain disputes British ownership of Gibraltar.
White House national security advisor John Bolton said the seizure was "excellent news", saying the tanker laden with oil bound for Syria was violating EU sanctions. He added that the US and its allies would continue to prevent regimes in Tehran and Damascus from "profiting off this illicit trade".

Analysis: Britain would not have acted to enforce US measures
By James Robbins, BBC diplomatic correspondent
It's clear that this seizure was to enforce EU sanctions against Syria, not US sanctions against Iran.
But it looks as if both the US and the UK had been tracking the movements of Grace 1 throughout its curious voyage from the Gulf to the Mediterranean.
Curious because such a valuable cargo of oil would normally be taken via the Suez Canal, even if that means using more than one vessel and transhipping the oil because not all super-tankers can squeeze through. It's a massive shortcut.
Instead, in this instance the master took his vessel and controversial cargo the very long route around the southern tip of Africa - the Cape. Was that a smokescreen to conceal its apparent destination - the Mediterranean coast of Syria?
The Americans were acutely interested because they are determined to prevent Iran profiting from oil sales which breach US sanctions.
Britain, by contrast, would not have acted to enforce US measures.
But when the super-tanker, all 330 metres of it, entered EU waters, specifically Gibraltar waters, the British authorities judged they had no choice but to enforce EU sanctions against Syria which the UK pushed for and strongly supports.
Brussels was not involved in the seizure decision. It is not a matter for EU institutions to enforce customs law. That is a responsibility of member states.
However, the Iranian charge that Britain was doing the Americans bidding may be hard to shake off.
That matters because it fuels an Iranian conviction that Europe only pays lip service to its continuing commitment to the hard-won nuclear deal - the deal which Donald Trump repudiated and does not want to survive.

Foreign Secretary Jeremy Hunt said the swift action by the authorities in Gibraltar and the Royal Marines would deny valuable resources to Syrian President Bashar al-Assad's "murderous regime".
Gibraltar said there was reason to believe the ship was carrying Iranian crude oil to the Baniyas Refinery in the Syrian Mediterranean port town of Tartous.
The refinery is a subsidiary of the General Corporation for Refining and Distribution of Petroleum Products, a section of the Syrian ministry of petroleum.
The EU says the facility therefore provides financial support to the Syrian government, which is subject to sanctions because of its repression of civilians since the start of the uprising against President Assad in 2011.
The refinery has been subject to EU sanctions since 2014.
US-Iran tension
This latest row comes at a time of escalating tensions between the US and Iran.
The Trump administration - which has pulled out of an international agreement on Tehran's nuclear programme - has reinforced punishing sanctions against Iran. Its European allies, including the UK, have not followed suit.
Also last month, the US accused Iran of attacking two oil tankers with mines just outside the Strait of Hormuz - an accusation denied by Iran.
Days later, an unmanned US drone was shot down by Iranian forces in the Gulf.
Iran said it had violated Iranian airspace and would send a "clear message to America". The US insisted the drone had been over international waters. President Donald Trump tweeted: "Iran made a very big mistake!"
There have been growing tensions between the UK and Iran too, after Britain said the Iranian regime was "almost certainly" responsible for the attacks on two oil tankers in June.
The UK has also been pressing Iran to release British-Iranian mother Nazanin Zaghari-Ratcliffe who was jailed for five years in 2016 after being convicted for spying, which she denies.