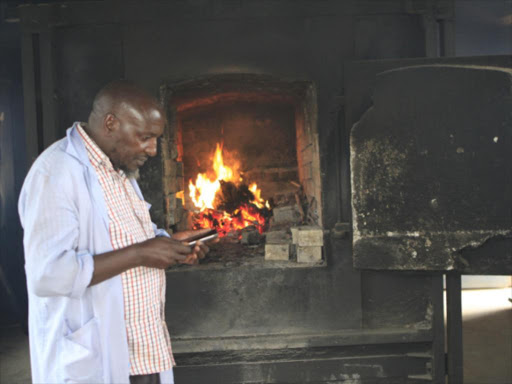 When Nderitu Maina joined Langata cemetery nine years ago, he was going to be in charge of what was an already full graveyard.
The former trained secretary, who worked at Karen Hospital and later Pumwani Maternity, found himself doing rather odd jobs.


He developed an interest in cremation and has since become the crematorium technician at the cemetery.

“Here we are trusted to do three jobs. We bury, we exhume when called upon to, and we cremate,” he said.
Among the three jobs, Nderitu's favorite is cremation. He is dedicated to that duty and performs it with care and dedication.
When we arrived for the interview, Nderitu was at the crematorium, performing the final rites to a departed soul.
“He is a foreigner. His family brought him in and he has been in the kiln for more than five hours,” he said when we began.
'ENJOYABLE' JOB
He says the cremation process is not complicated and before the body is handed over to him the family is allowed to perform a service and final prayers.
“The family may choose to stick around until the cremation begins, though some people just drop the body and come later for the ash,” he said.


Upon completion of the service by the family, Nderitu places the coffin carrying the body on an open pyre of wood a few metres from the ground.
He then places logs of firewood in the furnace before pouring diesel on them and the body then lighting it up.
“I love what I do so much and I wouldn't exchange it for any other job,” he said with a broad smile.
Nderitu who has lost count of the number of bodies he has cremated, says while he respects his customers (the deceased), he finds immeasurable joy in the job.
“What I enjoy most is the point where I turn the body around as it burns. Then the crushing of the bones to get the ashes. It is out of this world,” he said.
The 48-year-old father of three says he sometimes stays late at work cremating. “Many times I have left this place after midnight.”
He says he has never let a body brought for cremation stay overnight, no matter how late it arrives.
Fifteen minutes into the interview, Nderitu asks out to go check on the process of the body in the furnace.
We walk with him to the one corner of the cemetery almost opposite the KWS gate, where the crematorium is.
MULTI-TASKING
Red flames waft outside as Nderitu walks in, picks a long stick and stands next to the furnace.
His phone in one hand and the stick in the other, he turns "the vital organs" around.
“These are the lungs and the heart, they take longer to burn,” he said pointing at them.
Seeing him do his job and receive a call in the cremation chamber will stay with me for a while.
He said cremation for an adult can take between five an six hours, after which the family collects the ash.
As he prepares the kiln for another cremation coming later afternoon, one can see the ease and comfort he is in.
“I have come here with my children on several occasions, and they understand the kind of job I do. They take it just like any other job,” he said.
Ironically, Nderitu does not want to be cremated. “I don't want to be cremated. I want my family to have a grave that will serve as a memory of me. Graves console at times,” he said.
Cremation fee for an adult is Sh16,800, Sh14,800 for a child and Sh12,800 for infants. However,
Kenyans and Africans at large are yet to embrace cremation as a means of paying their last respects to the dead.
In October 2011, Wangari Maathai, Africa's first female Nobel Peace laureate, was cremated at the Hindu Crematorium in Kariokor according to her wishes.
She remains the first prominent Kenyan of African origin to have chosen the process.
Kenya has 18 cremation centres, with Kenyans of Asian origin being the ones who choose cremation the most.

#4
yes this is the way to go. tuache kuaribu mashamba ya kupanda mimea na miili that have no benefit to environment but a reminder of pain and loss .

#7
This guy is a psychopath, ati the part he enjoys most...

#8
How about The Medical Examiner who performs an autopsy?

That's even more disgusting cutting into the human body like a dead animal.

Let the money be.

#9
Mangele said:
That's even more disgusting cutting into the human body like a dead animal.
Click to expand...
It gets easier when one gets used to it.