#1
Thomas Jonathan Ossoff is an American politician, documentary film producer, and investigative journalist. He is the Democratic Party nominee for the 2020 U.S. Senate election in Georgia, running against Republican incumbent Senator David Perdue.

Jon Ossoff was 16 years old when he wrote a letter to John Lewis, the Georgia congressman and civil rights pioneer, that led to a spot as a volunteer in Mr. Lewis’s office.
When Mr. Ossoff was 19 and a rising sophomore at Georgetown, he went to work for Hank Johnson as the primary speechwriter and press aide for Mr. Johnson’s 2006 congressional campaign.
And Mr. Ossoff was 26 when, without any journalism experience other than an internship, he was made chief executive of a small documentary film company based in England.
Mr. Ossoff has always been adept at making his own breaks. He has consistently outperformed his professional résumé, impressing lawmakers many years his senior with his intellect and drive. And he has capitalized on his own well-off upbringing and a series of well-timed introductions and personal endorsements to rise through Democratic politics in Georgia.
Now 33, Mr. Ossoff is pursuing his most ambitious goal yet: to capture a seat in the United States Senate against an incumbent Republican, David Perdue, in a traditionally conservative state. If successful, he would become the youngest senator in 40 years.

Senate
2 seats are up for election this year
Senate 1
Jon Ossoff, a 33-year-old progressive Democrat, is looking to unseat David Perdue, a 71-year-old conservative incumbent more than twice his age.


Senate 2
Kelly Loeffler, a Trump loyalist who was appointed to the Senate a year ago, is hoping to stave off the challenge from the Rev. Raphael Warnock, a preacher turned politician.

#3
To Trump, GOP, the party of Lincoln was a rental vehicle, one that he took for a joyride and is getting ready to turn back in, with trash jammed under the seats and stains covering the upholstery. Also, the tank is empty, and there’s a crack in the windshield. With control of the Senate at stake in the state’s two races, the president chose to spend weeks peddling baseless claims that Georgia’s electoral system was rigged, fueling an online movement to boycott Tuesday’s election. He demonized the state’s Republican leaders and fractured the local GOP. He ignored calls from his allies to rally in the state sooner. His support for Sens. Kelly Loeffler and David Perdue mainly came in the form of the occasional tweet and two rallies, including one on Monday. He blasted Senate Majority Leader Mitch McConnell for not heeding his calls for boosted stimulus checks.

So when Democrat Raphael Warnock defeated Loeffler early on Wednesday — and with Democrat Jon Ossoff having a good chance of toppling Perdue — Republicans were quick to blame Trump. 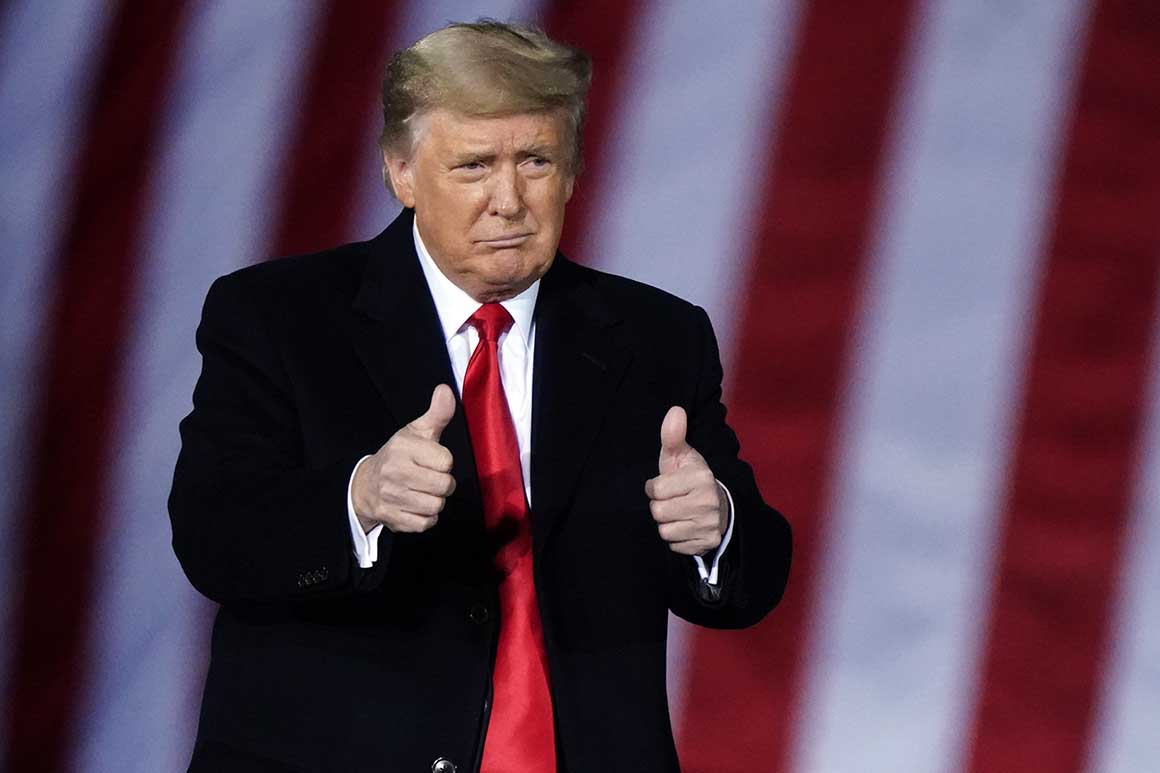 The frustration stems from the days after the Nov. 3 election. While Republicans tried to reset in Georgia and prepare for the two runoff races, the president set off a civil war within his own party as he launched a divisive campaign to overturn the 2020 election.

“Trump is the cause of this, lock, stock and barrel,” said one Republican strategist. “But when you’re relying on someone to win you a Senate race that also lost statewide eight weeks prior, you’re not in a position of strength.”
The immediate recrimination is emblematic of the complicated GOP dynamics that have emerged after Trump’s loss in the November election. Fissures are forming as Republicans decide whether it's useful to cling to Trump — even as he tries to subvert an election — or to distance themselves. And if the Georgia races are any indication, it appears Republicans are willing to turn on Trump if he can’t reliably turn out the vote for candidates in the months and years ahead.

#4
A North Texas lawyer has been fired by his employer after he was seen on video outside the Capitol building along with Trump supporters yesterday. Social media posts identified the attorney as Paul Davis, who was an associate general counsel and director of human resources at an insurance company based in Westlake.

I humbly thank the people of Georgia, who have entrusted me with the representation of our great state in the U.S. Senate. My team is working diligently on the transition so we can begin to deliver results immediately upon taking office.
I’m thrilled that my friend, the Rev. Raphael Warnock, will be joining me in a Democratic-majority Senate!
This victory was possible because of your support. Every call, every door, every dollar -- it all mattered. This is the best grassroots team in politics. From the bottom of my heart, THANK YOU.
This victory was built on years of hard and smart work by organizers and activists across Georgia. And this victory was only possible thanks to the heroism of civil rights heroes like John Lewis and Amelia Boynton, who put their lives on the line decades ago fighting for voting rights.
Congressman Lewis was one of the most important people in my life. When we first shared a meal, many years ago, he wanted to speak with me about the importance of the alliance between Blacks and Jews in the American South.
And now a Jewish man he mentored and a Black man who was his pastor have been elected to represent the State of Georgia in the U.S. Senate. I know Congressman Lewis is looking down on us today beaming with optimism.
Only because heroes like Lewis, Boynton, and so many others fought tirelessly to secure voting rights for Black Americans were these twin victories in Georgia possible. Only thanks to the overwhelming support of Black voters in Georgia have I been elected to the Senate, where I will work tirelessly to expand justice and equity in America, to strengthen civil rights, to end racial disparities in health care and economic opportunity, and to defend the sacred right to vote.
From the beginning, this campaign was an uphill battle. I entered the race as an underdog. The seat was considered safe for the incumbent. No one even thought I would win the Democratic nomination outright. And more money was spent attacking me than any U.S. Senate candidate in American history.
But this team never took our eyes off the prize -- and we never forgot why we were doing this -- to secure health, jobs, and justice for the people. For ALL the people.
That commitment will guide me as I work in the Senate to ensure that every Georgian has great health care, no matter our wealth; that we invest in an economic recovery that includes all communities; and that we secure equal justice for all.
On Wednesday, we all watched the events unfolding in our nation’s capital in horror.
Even though the man whose poisonous lies incited that insurrectionist attack on the U.S. Capitol will soon be out of office, we have much hard work to do to repair our struggling democracy, heal the wounds of these last four years, and establish a politics based on love for each other and commitment to human rights rather than fear, hate, deceit, and corruption.
But better days ARE coming.
With these victories in Georgia, we are turning the page on these last four years. We can elevate our eyes to the horizon and dream again about what's possible.
We don't have to accept that poverty or racism or violence are inevitable or necessary.
We can dream about higher and higher heights.
We can dream about -- and build -- the Beloved Community that King and Lewis urged us to strive for.
The future is bright. Thank you for believing in me. Thank you for this victory.
With immense gratitude and love,
Jon
#JonOssoff #OurTimeIsNow
#GApol #GASen