A 27-year-old New Jersey woman was arrested for allegedly stabbing her identical twin sister to death. After responding to a report of an unconscious woman at the Centennial Village Apartments, Camden police found Anna Ramirez bleeding from a stab wound. She was rushed to the hospital where she was pronounced dead.
A few hours later, police identified and arrested a suspect in the case, Anna's twin sister Amanda Ramirez. She is being held on one charge of first-degree aggravated manslaughter. She is awaiting a pretrial detention hearing where prosecutors plan to ask that she be held without bond until her trial.
Officials have not released any details about the case or speculated about the motive for the killing.

#3
Masgwembe said:
A Makena in the making....
ni wewe Gashui I'm talking to.
Click to expand...
wacha upussu...would you rather i posted alfabetachieth?

#7
gashwin said:
wacha upussu...would you rather i posted alfabetachieth?
Click to expand...
even your local cattle dip gossip will do.

#10
Why you all getting ya knickers all tied up in knots...you already tagged @gashwin the village idler. When he then goes ahead and does what a village idler does best,you start complaining. Calling him @Georgina makena
Just wait...could it be? Naaaahh

#12
Another Meffi post from a low IQ baboon
P 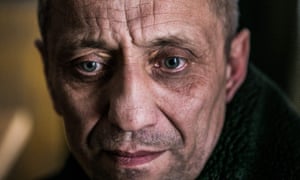 A court in Siberia has convicted a former police officer of raping and killing a further 56 women, making him Russia’s worst serial killer in the last century.
Mikhail Popkov, 54, terrorised his home city of Angarsk in the Irkutsk region for nearly two decades, luring women into his car late at night and then assaulting them with tools such as axes and shovels.
In 2015, he was sentenced to life for 22 murders. All the killings were committed between 1992 and 2010.
Aleksandr Shkinev, a regional prosecutor, said: “There is no doubt that Popkov committed these murders. He clearly showed the places where the bodies were buried, and, by an earring, tattoo or some other feature, described the murders and victims in detail.”
Investigators finally linked Popkov to the crimes in 2012 using DNA evidence and descriptions of his car.
Called the “Angarsk maniac” by the Russian media and interviewed on national television, Popkov dumped the bodies on roadsides or in woods near the eastern Siberian city. When the bodies were discovered, he sometimes returned to the scene of the crime as a police officer.
Shkinev said 14 of the victims remained unidentified.
In court Popkov had called himself a “cleaner” and claimed he was punishing the women for immoral behaviour. In a 2015 interview, he told the Russian tabloid Komsomolskaya Pravda: “They left their husbands and children at home and went out [drinking] as if for the last time. Of course nobody is without sin. But one must not hurt one’s dearest.”
Shkinev said in court that medical experts had determined the motive for the killing was “homicidal mania, an irresistible urge to kill”.
Popkov will be sent to the “black dolphin”, a high-security prison on the remote border with Kazakhstan which holds Russia’s most brutal criminals. Russia introduced a moratorium on the death penalty in 1996.
Popkov also had his police ranking, junior lieutenant, and state pension, about £285 a month, removed. He said to be “disappointed” by the loss of the pension.

The conviction appeared to confirm earlier claims by Popkov that he had committed 84 murders, but three were excluded from the case for lack of evidence.
The Soviet-era serial killer Andrei Chikatilo was executed in 1994 after confessing to 56 killings. Alexander Pichushkin, often called the “chessboard killer”, is serving a life sentence for 48 murders in a park in south-west Moscow.

Support The Guardian
Available for everyone, funded by readers
ContributeSubscribe
Back to top
© 2019 Guardian News & Media Limited or its affiliated companies. All rights reserved.
P

Hata video ziko. If you have the stomach for it. 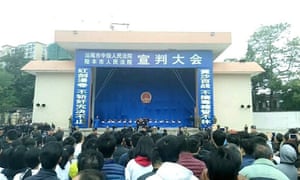 A court in China has sentenced 10 people to death, mostly for drug-related crimes, in front of thousands of onlookers before taking them away for execution.

The 10 people were executed immediately after the sentencing in Lufeng in southern Guangdong province, just 160km (100 miles) from Hong Kong, according to state-run media.
Seven of the 10 executed were convicted of drug-related crimes, while others were found guilty of murder and robbery.

Four days before the event, local residents were invited to attend the sentencing in an official notice circulated on social media. The accused were brought to the stadium on the back of police trucks with their sirens blaring, each person flanked by four officers wearing sunglasses.
They were brought one by one to a small platform set up on what is usually a running track to have their sentences read, according to video of the trial. Thousands watched the spectacle, with some reports saying students in their school uniforms attended.
People stood on their seats while others crowded onto the centre of the field, some with their mobile phones raised to record the event, others chatting or smoking.

China executes more people every year than the rest of the world combined, although the exact figure is not published and considered a state secret. Last year the country carried out about 2,000 death sentences, according to estimates by the Dui Hua Foundation, a human rights NGO based in the United States. China maintains the death penalty for a host of non-violent offences, such as drug trafficking and economic crimes.

However, public trials in China are rare. The country’s justice system notoriously favours prosecutors and Chinese courts have a 99.9% conviction rate. The trend to reintroduce open-air sentencing trials is reminiscent of the early days of the People’s Republic, when capitalists and landowners were publicly denounced.
The most recent public sentencing and subsequent executions were not a first for Lufeng. Eight people were sentenced to death for drug crimes and summarily executed five months ago in a similar public trial, according to state media.
The town was the site of a large drug bust in 2014, when 3,000 police descended on Lufeng and arrested 182 people. Police confiscated three tonnes of crystal meth, and authorities at the time said the area was responsible for producing a third of China’s meth.
Although open-air sentencing hearings are rare in China, they have been revived in recent years in some areas, most notably for cases of alleged terrorism in the country’s far western region of Xinjiang.
A crowd of 7,000 watched as 55 suspects were sentenced in 2014, where at least one person was sentenced to death.


Support The Guardian
Available for everyone, funded by readers
ContributeSubscribe
Back to top
© 2019 Guardian News & Media Limited or its affiliated companies. All rights reserved.

#17
Baboons don't get it but this case could be studied for years in forensic psychology....