BBC TrendingWhat's popular and why 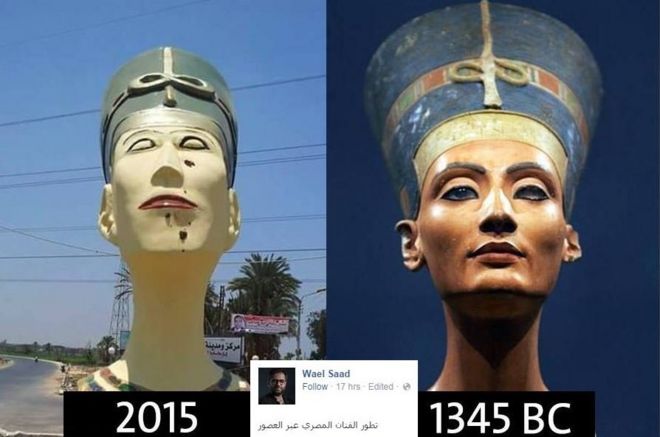 On the right: the famous bust of Nefertiti in the Neues museum in Berlin. On the left: the replica that sparked an outcry in Egypt. Facebook user Wael Saad commented: 'This is how Egyptian art has evolved over the years'
The unveiling of an ugly copy of a famously beautiful bust of Queen Nefertiti caused Egyptians to mock the authorities as well as the current state of art in the country.

Queen Nefertiti ruled Egypt alongside her husband in the 14th century BCE, and her beauty is legendary - her name in fact translates as "a beautiful woman has arrived." Our modern picture of the ancient queen has been largely shaped by a bust unearthed in 1912 which currently sits in a museum in Berlin - its ownership is the subject of frequent debate between Egypt and Germany.

To Egyptians, Nefertiti remains a proud symbol of their country's impressive history and beauty. So when the authorities wanted to commission a statue at the entrance of the city of Samalut, they thought of the ancient queen.

Unfortunately, the replica that resulted bore so little resemblance to the legendary beauty that many began to despair for the state of Egyptian art. In simple terms, it was just plain ugly.

"This is an insult to Nefertiti and to every Egyptian," tweeted one Egyptian woman. Another wrote: "It should be named 'ugly tasteless artless statue'... not Nefertiti."

Many Egyptians feeling offended by the failed attempt to replicate the iconic bust directed their anger at the sculptors: "If you don't know how to make statues don't go and do something so unfair to the beautiful Nefertiti," tweeted one man. "Not only are you distorting the present but also the past... I ask that the original bust not be returned from Germany, at least there she's got her dignity," another wrote.

Thousands of other Egyptians are using the hashtag "Nefertiti" in Arabic, comparing the replica to the original bust, often using sarcastic captions: 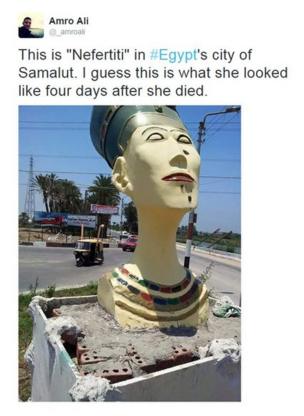 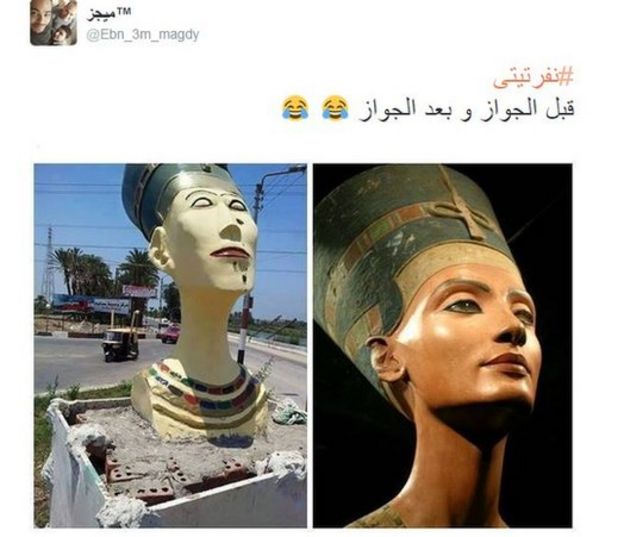 Translation: "Nefertiti before and after marriage"
A number of people even compared the statue to Frankenstein's monster: 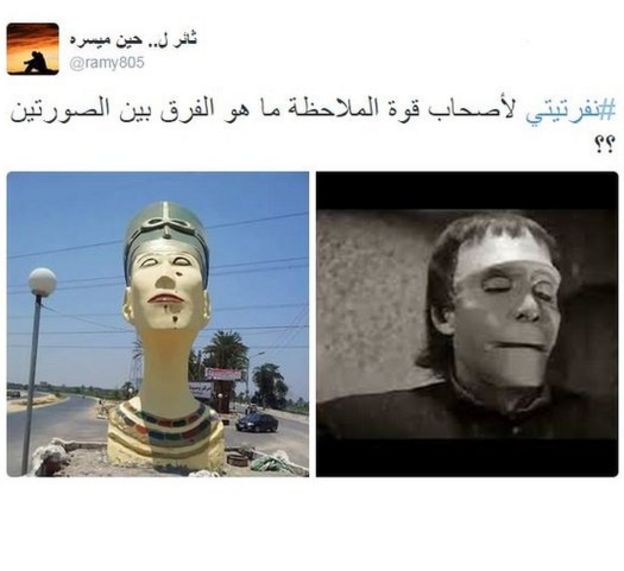 Translation: Spot the difference
The massive bust has now been removed following the public outcry and will be replaced with a statue of a peace dove, according to local media reports. ‏

Not to mention the whitewashing. Even us we can blackwash. #3
they were trying to make her look egyptian, the earlier one looks more of an african lady

Not to mention the whitewashing. Even us we can blackwash.

#5
Nefertiti......that name is either scary or hilarious!
D

#7
@Nefertities bitch you think everything revolves around you???

#8
@Nefertities, could it be that you resemble the Egyptian queen facially and bustwise?