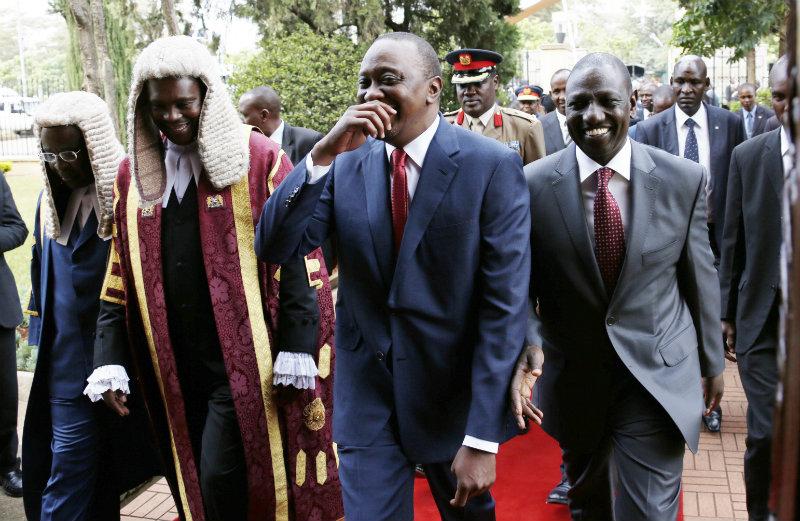 What do you make of this speech ? I think Uhuru is a nice and honest guy surrounded by thugs.
O

#2
I like our president but he was born in so much wealth and protection that I honestly don't know how he can relate to our challenges. He's the best we have so we'll support him.
Those corrupt people that surround him were denied access to President Kibaki. Yes, mega corruption is back.
Last edited by a moderator: Mar 26, 2015

#3
Crap.
Kenyan politicians love power and wealth they have no intention of changing status quo.
Uhuru belongs to that group.

#4
Hunter Xp said:
I think Uhuru is a nice and honest guy surrounded by thugs.
Click to expand...
I second you

#5
Uhunye suffers from one major weakness 'a lack of clear direction on what he wants to achieve' and this is the curse of his sheltered upbringing.....a gd natured person isn't enough for the seat he occupies...

What do you make of this speech ? I think Uhuru is a nice and honest guy surrounded by thugs.
Click to expand...
I do not envy the president for one moment. It is unrealistic to expect a single individual to eradicate a vice that runs so deep in the society. My advice;the government should seek international help to combat the corruption menace the same way we do when faced with natural calamities beyond our means.
Last edited: Mar 27, 2015

#9
montecarlo said:
@Bus......read about China...then useme ni international help gani wanatumia kumaliza corruption...
Click to expand...
We are dealing with an epidemic, not a potential epidemic.What is more, those benefiting from the vice outnumber those who would like to see it eliminated. Solution, bring in outside help to boost the numbers in favor of corruption elimination.

#10
The president is an ambitious person and wants to protect the vast interests of his wider family(Ngengi Klan). While i wouldnt say that he is a corrupt person himself, he is either naive or afraid of initiating war on corruption. In other words, they are very many powerful corrupt people in this country that no one would dare upset especially if they decide to gang up against you with the support of stupid sheeple citizens. You can never try to protect dumb people, they will gang up with the enemy you are trying to protect them from and they will kill you. Ask Jesus. Jesus was your regular rebel leader telling the jews how much their leaders and the occupying Roman authority and ceasar were bad people. Look at what he got in return. Am an atheist though. There are countless other examples even in our modern kenya. The only way you can protect dumb people is when you are armed to the teeth and you are willing to crush any dissent either from the enemy or from the dumb sheeple. Egypt, Modern China, Russia, Rwanda, and Singapore style.
Last edited: Mar 27, 2015

Staff member
#11
You can be sure of one thing, on the list of Cabinet Secretaries to Step down/aside(What is the difference?), Kazungu Kambi leads from the front.