A recent article in Environmental Graffiti, detailed the thorniest trees on Earth. Here are 7 bad-ass trees you couldn’t even hope to climb without some serious protective gear. 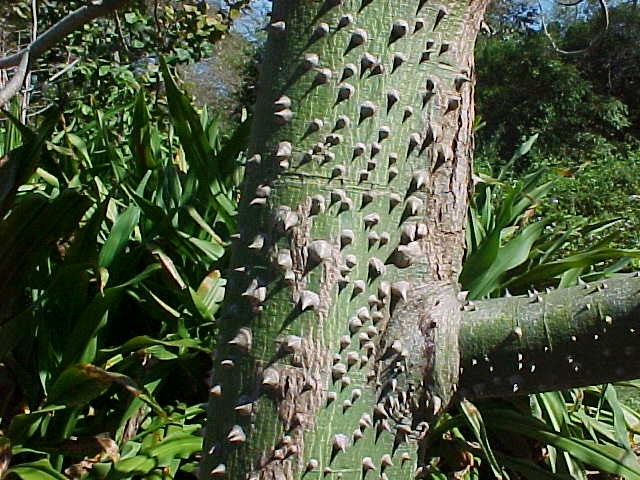 Native to the subtropical forests of South America, the Silk Floss Tree is now widespread around south Florida, and appreciated for its beautiful flowers. Getting to those precious flowers is definitely not the easiest of tasks, due to the giant thorns that cover its trunk and branches. I have a specimen of this tree in my garden now. . . about 6-feet tall. The thorns are just as impressive as those pictured here, though perhaps not as numerous. . . yet.


The cotton inside the flower pods is used as filling for pillows, and the wood of the Silk Floss Tree is used in packaging, and for the making of paper. But this thorny tree is most often planted for ornamental purposes, along city streets. 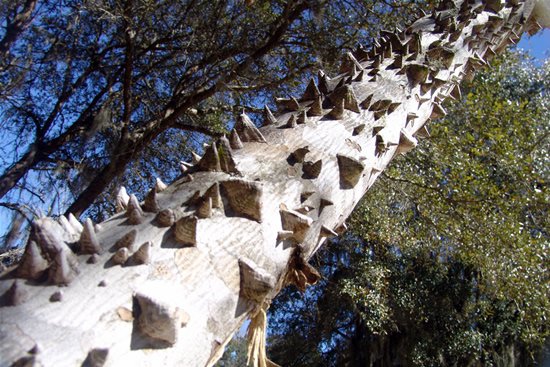 The name of this particular tree denotes the cone-like thorns on the bark of older trees that make their trunks and branches look like clubs. Hercules Club is native North America, and is spread in the eastern part of the continent. 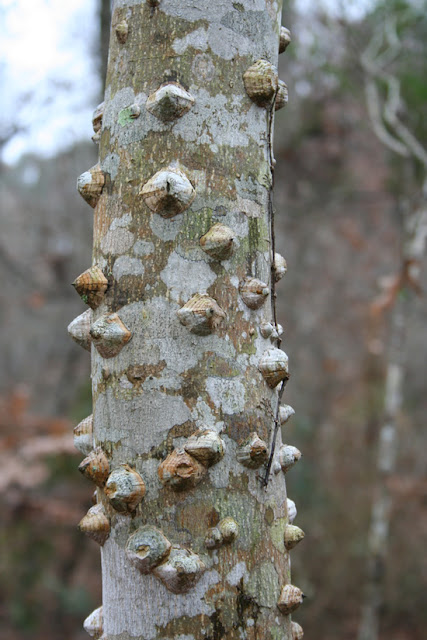 Those bulky thorns may not look menacing for an experienced tree-climber, but if you look closely, every one of them has a sharp pin-like tip that can cause a lot of pain. The spines of the Hercules Club tree make a lot more sense, if you consider them as a defense mechanism against the grazing animals that once ruled the land.
Honey Locust
(Gleditsia triacanthos) 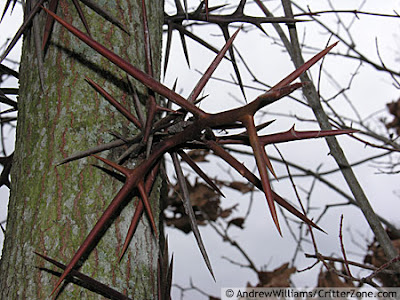 Just like Hercules Club, the Honey Locust tree is native to eastern North America, and can be seen from southern South Dakota to New Orleans and central Texas. A truly fascinating tree, the Honey Locust features 3-4 inch long thorns that can cause serious lacerations, if you’re not careful. They grow on the trunk and lower branches, which probably means they evolved as a defense mechanism against animals that fed on its bark. 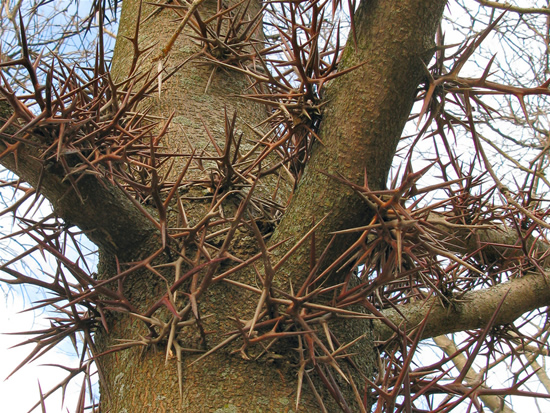 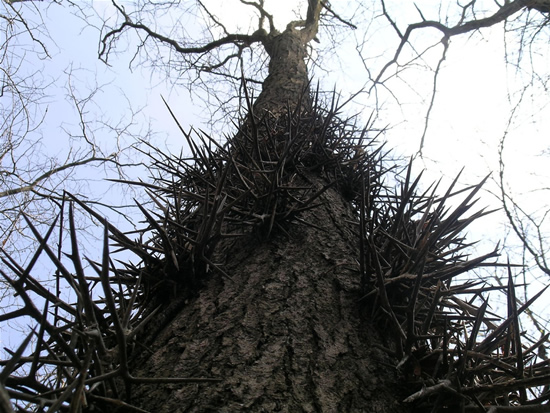 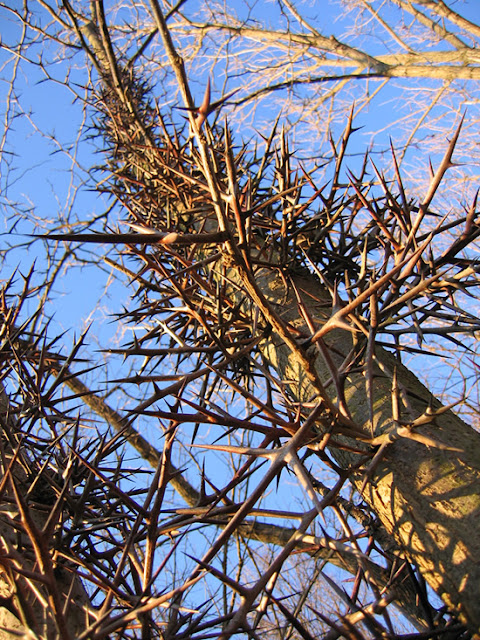 The thorns of the Honey Locust are often to blame for foot injuries, as they tend to go right through soft sole shoes and into the foot. Also, if you drive past one of these trees, you have the chance of getting flat tires. Some even claim to have seen large birds impaled by the thorns of a Honey Locust tree. 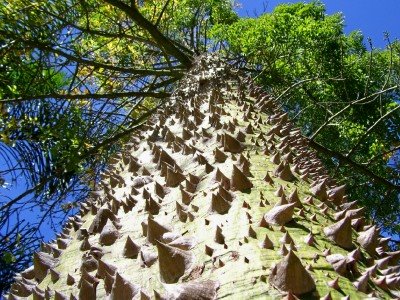 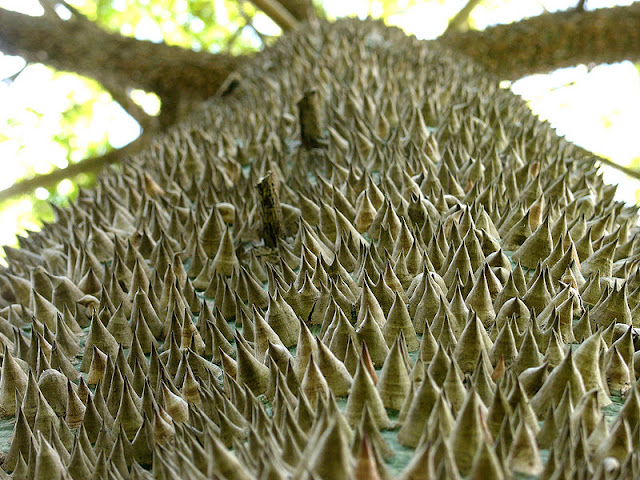 The Kapok is a tropical tree, native to Mexico, Central America and northern South America. the Maya people considered Ceiba pentandra a sacred tree upholding the world, with roots going down into the underworld. Ancient incense burners and burial urns, discovered in Maya area, feature Kapok spikes motifs, up and down their sides. 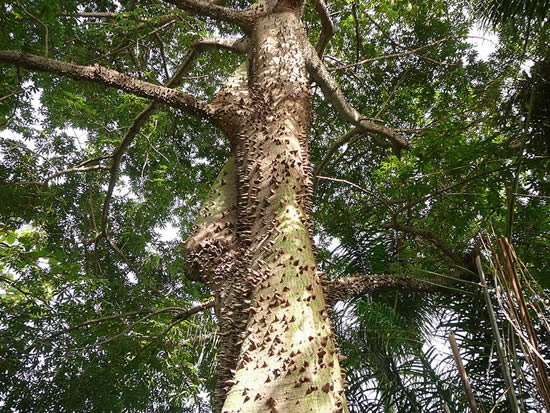 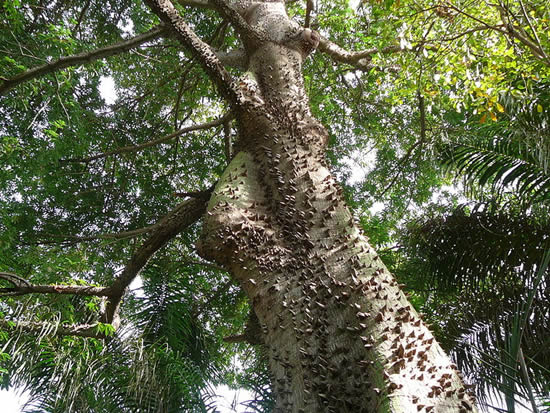 The fibers contained by the flowers of the Kapok are used to fill mattresses, pillows, stuffed toys, its seed oil is used in the making of soap, and the gum of the Kapok is a traditional stomach ailment. Luckily, the sharp thorns of the tree fall down as it ages.
Pejibaye Palm
(Bactris gasipaes) 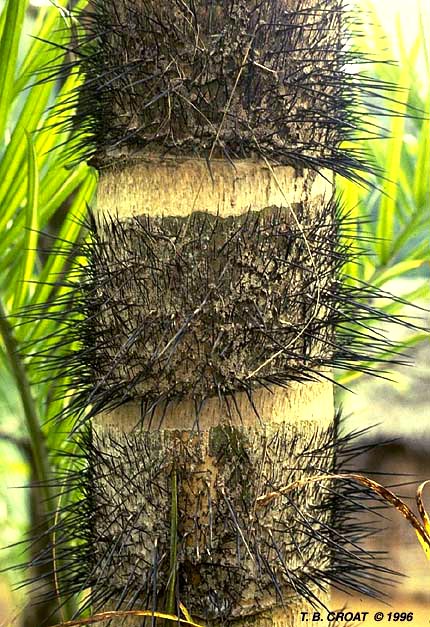 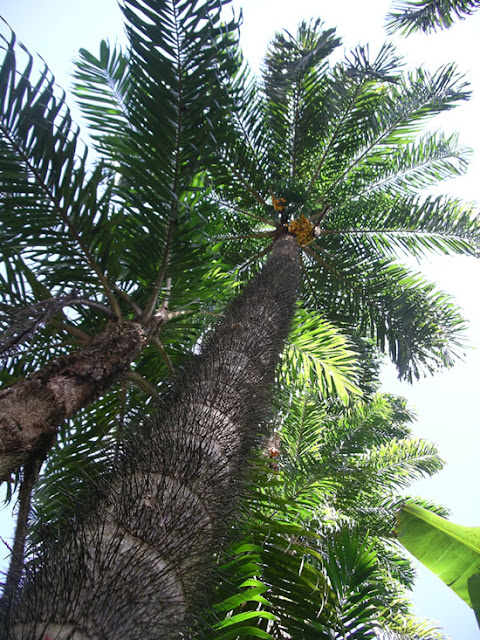 The Pejibaye Palm tree is one of the most dangerous-looking trees on our list, with thousands of long, sharp thorns covering its entire trunk. Native to Central American countries like Costa Rica or Nicaragua, the Pejibaye is grown for its miniature coconut fruits, highly appreciated for their taste. Reaching the clusters of tiny fruit is not easy, but the locals have devised a technique that requires scraping off portions of the bark. Read about a Scientist at Work around these trees in Amanda Caudill's "Trees that Attack."
The long, black thorns of the Pejibaye Palm have always been considered more of a blessing that a curse. Indigenous tribes have used them to fashion weapons, and today they are still used to make needles and fishhooks.
Pochote
(Pachira quinata) 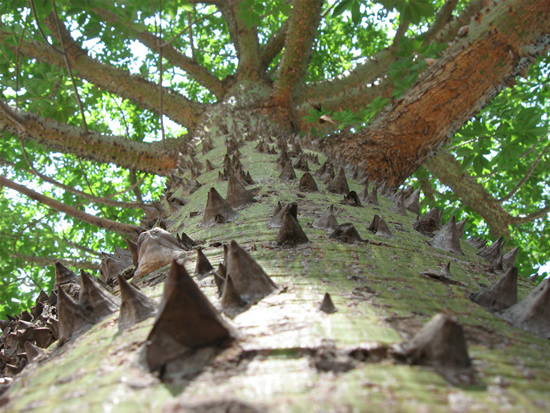 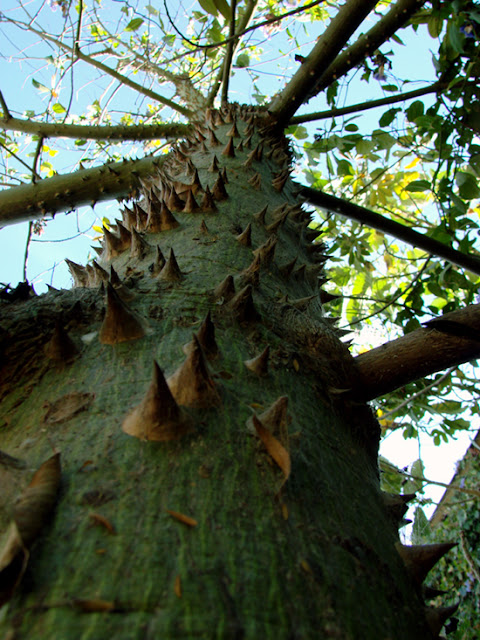 The Pochote tree of Central America and northern South America is considered the Bear Grylls of the tree world. This ultimate survivor grows on almost pure rocks, isn’t affected by drought (it sheds its leaves and enters a sort of long-term hibernation), if cut down it sprouts right back, and the dense thorns keep animals away from its delicious leaves. 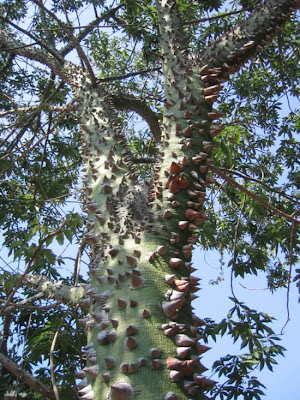 The trunk and branches of the Pochote are covered with large, stubby thorns, so they are often used as living fence posts,with barbed wire strung between them. You definitely don’t want to be climbing one of these fences.
Sandbox Tree
(Hura crepitans) 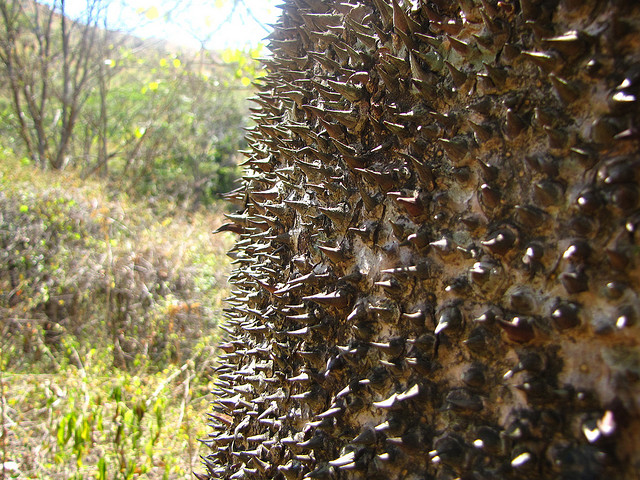 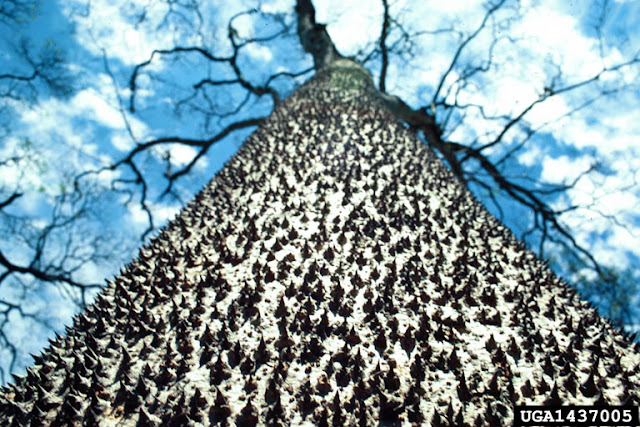 The above mentioned trees could definitely inflict some pain, if you try to climb them, but the Sandbox Tree could cause harm from 300 feet away, making it the ultimate bad-ass of the tree world. The dark thorns emerging from its bark, give the Sandbox Tree an ominous look, but its real weapons are the pumpkin-shaped fruit that literally explode, with a gunshot-like sound, when ripe, launching seeds 300 feet in every direction, at a speed of 150 miles per hour. 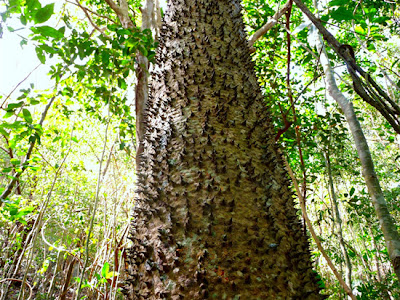 You think that sounds dangerous? Try eating one of these bullet-like seeds and you’ll get serious stomach cramps, diarrhea, vomiting, impaired vision and a fast heartbeat. Eat two, and you can add delirium, convulsions, and even death. The yellow sap causes inflammation, in contact with the skin, and causes temporary blindness, if rubbed on the eyes.
You must log in or register to reply here.
Share: Reddit Pinterest Tumblr WhatsApp Email Link