Sonko Needs Genuine Advisor With His Interests At Heart....

The court heard that the two were caught in possession of uniform resembling military attire, which they had been spotted wearing in public.

The investigating officer at the Anti-Terrorism Police Unit (ATPU) told the court that the attire was linked to one worn by a terrorist group. 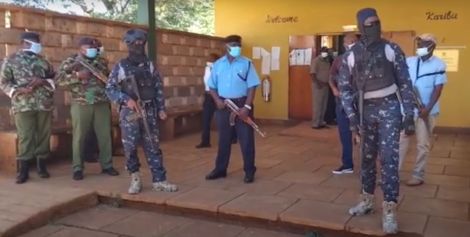 He added that he had received information that the two had been financing terrorism activities.

A search has since been conducted in their homes in Buruburu and Komarock and a number of items retrieved including military attire, mobile phones, DVDs, Sim Cards and a laptop.

The detectives now want to conduct a forensic study to get more information regarding the suspects.

Sonko during a court proceeding

The officer said the suspects are a threat to national security and sought to detain the duo for an extra 30 days.

The former governor is facing terrorism charges and is currently at the Kamiti Maximum Prison.

ATPU is seeking to have him in custody for 30 days to facilitate investigation on alleged financing of terrorism activities and arming a militia group.

He is also facing robbery with violence and assault charges stemming from 2019 offenses in Buru Buru which he denied.

A ruling for the 30-day extension sought by the ATPU will be made on Tuesday, February 9.
D

#2
in his book "peeling back the mask", this is what Miguna wrote about someone

#3
Problem is that he is being misadviced by tangatanga leaders led by Murkommen and others. They're telling him wewe vumulia.. ukitoka jela u will be treated like a king coz u didn't back down or apologised to Uhuru. What these fools don't know is that Uhuru has just unleashed a small portion of his ruthlessness. If he wants to go the all 900yards this chokosh will find himself suffering in Mayani maximum homosexual prison.

And if he keeps on fighting, Uhuru will unleash his next card which is to peana Sonko to US authorities. He has drug cases ni vile hazijafunguliwa. He may end up in a 23hr solitary cell in Texas maximum prison.
S

#4
Not that sonko hana advisers. It is that he never listens to no one! He has no class. He has no integrity. He does not heed to any advice.

#5
Getting high on your own supply

Staff member
#10
Kuna wakati huyu mzee alikuwa anaitwa Charles Orita (RIP) alitujoin pale Buruburu kwa pub ingine huko late 2000s. By then Sonko was campaigning for Makadara seat. He was his campaign manager.
We didn't know much about this chokosh so we pressed him for more information.
His one statement was:
"He is the most childish, connish, thuggish, mafiaish, and useless piece of shit that this country will have to put up with for a decade or so. I hope and pray that Kenyans will learn about this thug early enough and get rid of him soonest before he makes a mockery of Kenyan leadership"
How true the mzee was..

#11
Sonko is staring at a long prison term:

The State security machinery last evening engaged a higher gear as it activated all options at its disposal to send former Nairobi governor Mike Sonko to jail.

Whether Mr Sonko, a politician who beat all odds on his way to the top before tumbling down, has finally run out of the proverbial nine lives, will be known in the coming days.


At the moment, however, the plan is to push him into a corner where he cannot speak.

Last evening, the state presented the flamboyant politician at the Kahawa West Law Court on a terror-related charge.

This happened just hours after the former city-county boss appeared at the Anti-Corruption Court for a mention of a case in which he is accused of demanding Sh10 million from a private company to grant it a contract to collect revenue in the county.

Located within the compound of Kamiti Maximum Prison, Kahawa Law Court is the first and largest court in Kenya dedicated to counter-terrorism and related high-risk cases.

It was officially launched in December last year and Mr Sonko is so far its highest-profile guest.

The court is today set to rule on the prosecutor’s application to hold him at the Kamiti Maximum Prison for 30 days.

He spent the night at the Gigiri Police Station.

“The suspect has started arming his private security agents with full military attire; namely military boots, military jungle uniform and firearms,” says an affidavit by Chief Inspector Newton Thimangu of the Anti-Terrorism Police Unit in support of the application by the state.


“I have intelligence information that the suspect is connected to the financing of terrorism activities and is in advanced stages of procuring arms and ammunition using a wide syndicate, which is complex and sophisticated,” he added.

Mr Sonko, who has of late been a thorn in the flesh of the Jubilee administration after falling out with President Kenyatta, is already facing three corruption cases.

He was at the end of last week barred by the court from uttering any defamatory words against Interior Principal Secretary Karanja Kibicho on alleged land grabbing.

He was on Monday charged at the Kiambu Law Courts with nine counts of assault, contrary to section 251 of the penal code.

He denied all the charges — including an additional count of forcible entry contrary to section 36 of the penal code.

The charges are in relation to an incident that happened on May 25, 2019, at Buruburu Phase 4 in Nairobi. His bail application is set to be heard this morning.

Meanwhile, the Directorate of Criminal Investigations is still investigating the former governor over claims of incitement to violence and undermining the authority of a public officer.

Additionally, the state’s security machinery is hard at work looking at his past criminal files.

Top of the list is to gather files regarding Mr Sonko’s sudden disappearance from Shimo La Tewa on April 16, 1998, a month after being jailed on two counts.

Although Mr Sonko’s disappearance from jail without completing his term has been coming out in piecemeal, it is only now that the state security apparatus has decided to follow up on it.

Prison records previously presented to the Ethics and Anti-Corruption Commission show that on March 12, 1998, Mr Sonko Kioko was convicted of failing to attend court in CF 675/97 and was sentenced to pay a Sh200,000 fine or serve six months in prison in default.

On the same day, Mr Sonko was also sentenced to pay Sh500,000 or in default serve six months in prison for failing to appear for previous hearings in CF 1727/96.

He was to serve both sentences concurrently for 12 months. He was admitted to Shimo la Tewa under prison number P/No. SHO/477/1998 and was scheduled to be released on March 11, 1999.

After his disappearance from prison, he was arrested on November 15, 2000, and transferred to Kamiti Prison to complete his sentence as prisoner number KAM/1255/001. He was released on February 12, 2001.


On Monday, the prosecution opposed Mr Sonko’s release on bail, claiming he was a flight risk, citing the case in Mombasa.

Since his arrest on Monday, Mr Sonko has been guarded round the clock by heavily armed officers from the Anti-Terror Police Unit and his visits have been restricted to only close family members and lawyers. Such a high level of security is only accorded to persons classified as enemies of the state such as terror suspects when being taken to court or on transit.

While appearing before the Anti-Corruption Court yesterday, Mr Sonko, who is known for his antics and bravado, was a pale shadow of himself even crying at some point as he narrated his tribulations.

“Don’t cry, don’t cry, comfort yourself,” Chief Magistrate Douglas Ogoti of the Anti-Corruption Court interjected before Mr Sonko continued: “Based on my current position you know it is very painful.”
S

#13
You're the one who's shallow if you really think we did not know that...

#14
This is Sonko in 2041... after he has just been released from prison after being found guilty of funding terrorism in 2021.
He says he is a changed man now and promises to work with opposition leader William Ruto who is in his 70s to ensure he finally becomes president.