#1
According to a well-known saying, “Chinese eat anything with four legs, except tables. And everything that flies, except airplanes,”
In China, penis is a delicacy. So much so that there’s a restaurant dedicated to feeding people phalluses of all sizes and origins, cooked in many different ways.

Found in an understated building next to Beijing’s West Lake is Guolizhuang, China’s first restaurant dedicated to penises.
On the menu is donkey, yak, bull and dog penis, as well as testicles.
Fried Donkey penis - they say it adds vitality and stamina to men

Inside, the building has private rooms, gold cutlery and an impressively luxe decor. Each group of diners gets a personal waitress, who will explain the health benefits of the different kind of shafts. These include increased strength and virility, so, perhaps unsurprisingly, the restaurant is popular with businessmen, as well as tourists.
https://theculturetrip.com/asia/china/articles/inside-the-restaurant-in-china-which-serves-penis/

#2
I should have posted this but I didn't.
I didn't have it coz I wasn't looking for it.

#3
The population of China is 1,419,932,275 and counting. There are not enough cows, pigs, goats and chickens to feed that number of people in one country.

#4
they eat aborted fetuses too ,its adelicay for the bedminton challenged men,it heightens sexual prowess 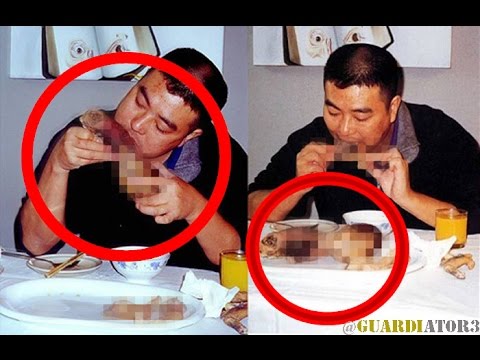