#1
... And Found an Unexpected Visitor

Doctors had broken the disheartening news to Rachel Palma, explaining that the lesion on her brain was suspected to be a tumor, and her scans suggested that it was cancerous.

Palma, a newlywed entering a new chapter in her life, said she was in shock, unwilling to believe it was true.

In September, scrubbed-up surgeons in an operating room at Mount Sinai Hospital in New York City opened Palma's cranium and steeled themselves for a malignant brain tumor, said Jonathan Rasouli, chief neurosurgery resident at the Icahn School of Medicine at Mount Sinai. But instead, Rasouli said, they saw an encapsulated mass resembling a quail egg.

"We were all saying, 'What is this?' " Rasouli recalled Thursday in a phone interview with The Washington Post. "It was very shocking. We were scratching our heads, surprised at what it looked like."

The surgeons removed it from Palma's brain and placed it under a microscope to get a closer look. Then they sliced into it - and found a baby tapeworm.

Warning: An image of a tapeworm appears lower in this article.

Palma, from Middletown, NY, said she had mixed emotions about it.

"Of course I was grossed out," the 42-year-old said Thursday, explaining that no one wants to think there's a tapeworm growing inside an egg in his or her brain. "But of course, I was also relieved. It meant that no further treatment was necessary." 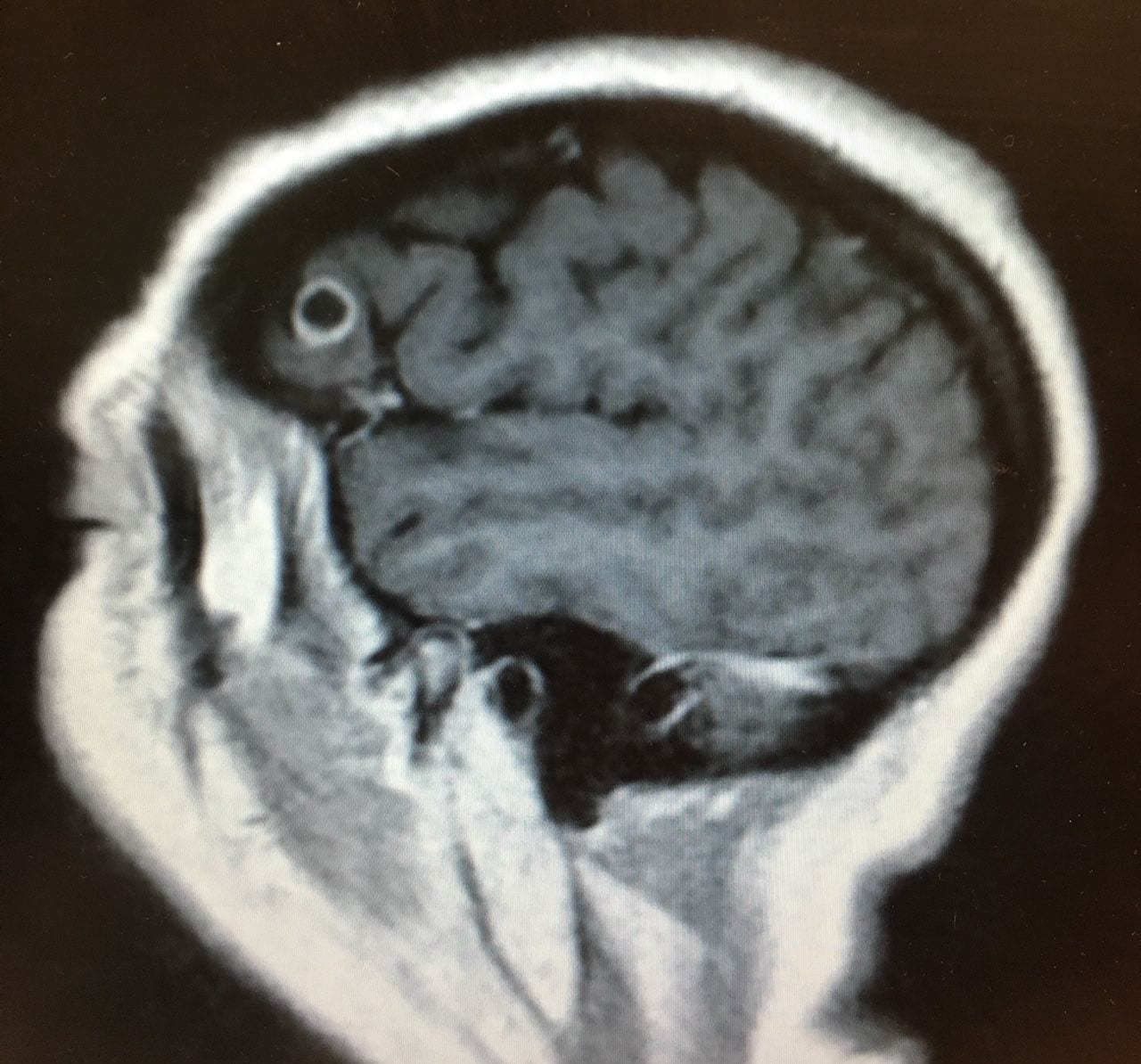 Palma said she had long been struggling with insomnia and, when she could sleep, nightmares. She said she had also experienced hallucinations, imagining that things were happening when they were not.

By January 2018, her symptoms had worsened. Palma said she started having trouble holding things, such as her coffee mug, which she inadvertently dropped on the floor.

She started having trouble texting people, so she resorted to calling them.

She started experiencing confusion - locking herself out of the house, showing up for work without her uniform and staring at her computer screen, unable to make sense of the words. At one point, she said, she called her parents and left a message on their answering machine, explaining that the place where she had bought her bed years ago suddenly wanted it back.

After doctor's appointments and trips to the emergency room, Palma went to see specialists at Mount Sinai Hospital who identified a lesion on her left frontal lobe, near a speech center. Rasouli, the chief neurosurgery resident, said the lesion's shape and the way it appeared on the MRI exam led doctors to a grim conclusion: brain cancer.

But upon inspection, Rasouli said that it was "clearly not a brain tumor."

Doctors diagnosed Palma with neurocysticercosis, a parasitic infection in the brain caused by the tapeworm Taenia solium.

Bobbi Pritt, director of the Clinical Parasitology Laboratory in the Mayo Clinic's Department of Laboratory Medicine and Pathology, said Taenia solium is not common in the United States but, when people do become infected, the parasite can present in two different forms. The most common form, she said, is the adult tapeworm, which is ingested from undercooked pork and lives in the gut. 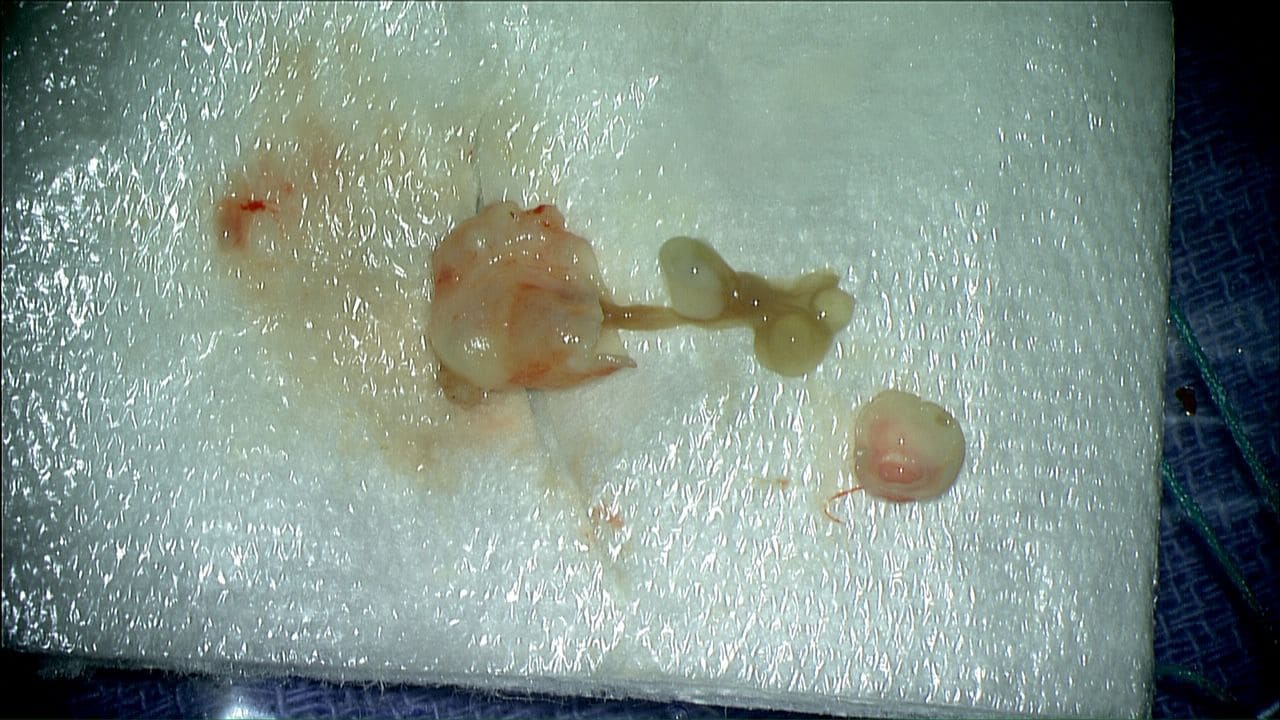 But there's another, less common way to get the parasite.

People who have the adult form shed microscopic eggs in their stool and, if they do not properly wash their hands, they can pass on the tapeworm to others, Pritt said.

For example, Pritt said, if the person who has the adult tapeworm gets the eggs on his or her hands and then prepares another person's food, that other person can unknowingly eat the eggs. She said the eggs then travel to the small intestine, hatch into larvae, penetrate the bowel wall and get into the bloodstream, where they can migrate throughout the entire body, including the brain.

The larval form appears as a fluid-filled cyst, Pritt added.

Pritt said the adult form is treated with an antiparasitic medication, but treatment for the larval form can be complex and depends on the location and stage of infection.

"I want people to understand that this was such a rare occurrence," Palma said about the tapeworm that was in her brain. "Every headache is not going to be a parasite."

"The best part of my story is it has a happy ending," she said.

#7
The.Black.Templar said:
Messed up...and people still want to go to mars!
Click to expand...
What does this story have to do with mars?

#8
Idias said:
This is as a result of eating slugs and snails. Hiyo kitoweo inafanya watu wawe paralysed na wapoteze eyesight.hatari sana
Click to expand...
Nope,suspectedly from larvae found in undercooked pork. The late Big Kev suffered from the same form of brain tumor. The larvae grew and multiplied in his brain. Remove one and another forms in a different part of the brain.Each operation leaving you with disabilities coz of the damage to the brain.
You must log in or register to reply here.
Share: Facebook Twitter Reddit Pinterest Tumblr WhatsApp Email Link