The Kardashev scale is a method of measuring a civilization's level of technological advancement based on the amount of energy a civilization is able to use. It was proposed by Soviet astronomer Nikolai Kardashev in 1964.[1] The scale has three designated categories:

The scale is hypothetical, and regards energy consumption on a cosmic scale. Various extensions of the scale have since been proposed, including a wider range of power levels (types 0, IV and V) and the use of metrics other than pure power. 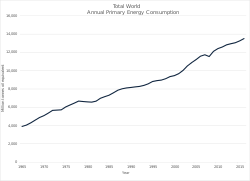 According to the astronomer Carl Sagan, humanity is currently going through a phase of technical adolescence, "typical of a civilization about to integrate the type I Kardashev scale."

At the current time, humanity has not yet reached Type 1 civilization status. Physicist and futurist Michio Kaku suggested that humans may attain Type I status in 100–200 years, Type II status in a few thousand years, and Type III status in 100,000 to a million years.[4]

A universal civilization, capable of harnessing the energy of the whole universe.


This civilization would be supergalactic, able to travel throughout the entire universe and consume the energy output of several—possibly all—galaxies. Think of that real estate size!


It would also be capable of projects of gargantuan proportions, such as manipulating space-time and tinkering with entropy, thus reaching immortality on a grand scale. An essentially indestructible and highly utopian civilization.

A multiverse culture, capable of harnessing the energy of multiple universes.


Welcome to metaphysics! Leave your common sense at the door, and count your strings before entering.


No doubt a child of the increased popularity of string theory, the type V civilization would outgrow its own universe. It would span countless parallel universes, being able to manipulate the very structure of reality.


Find that hard to imagine in practical terms? You’re not alone. We’re all friends here. Have a cookie.

Even more abstract is the type VI civilization. The type VI exists outside of time and space, and is capable of creating universes and multiverses, and destroying them just as easily. It’s similar in concept to a deity.


It’s hard to imagine a story with such a civilization, since its perfection and indestructible nature would offer little conflict potential. Unless, of course, you’re a lower type civilization waiting to be chewed, swallowed, and digested by one such type VI monstrosity. Recipe for paraversal tragedy.