To the bossman here..

#1
Make yourself useful and create a 'humor' folder (forum) Drumpf's rampages are no longer worthwhile news. They belong in an entertainment category.

Stephen King Bans Trump From Watching ‘It’ – Suggests He Kills Himself 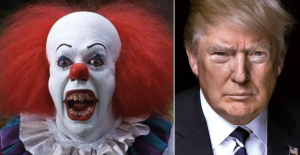 For those of you who follow famed author Stephen King on Twitter, you know that he is one of President Trump’s harshest critics. In fact, King has been so anti-Trump lately, that the President actually blocked him on Twitter. From our personal experience, the President usually blocks people who reply to his Tweets with comments which appear high up in the comments section of the tweet, as well as those who post messages which provide a negative message towards him.

While there are a ways to get around the ban by using certain apps, Stephen King instead decided to retaliate, even if only in a figurative manner.

“Donald Trump blocked me on Twitter. I am hereby blocking him from seeing IT or MR. MERCEDES. No clowns for you, Donald. Go float yourself,” King tweeted late last night.

The remake of the movie ‘It’ is currently playing in theaters, while ‘Mr. Mercedes’ is a highly rated television series about a demented killer. Both are doing very well, and both stem from Stephen King’s work. While it’s technically not possible to ban someone from watching a movie in a theater or a television series, Kings remarks drive home how childish the President has been as he tries squashing dissent by many Americans.

The end of King’s tweet used the phrase from the popular sci-fi series “The 100,” ‘Go Float Yourself”. The phrase refers to the way in which the characters of the series would put someone living on their spaceship to death. Basically they would force a criminal to step out into space without any gear on, resulting in certain death. So yes, King did just suggest that Trump kill himself in quite an interesting way.

Let’s hear your thoughts on Stephen King’s tweets in the comments section below.