#1
Yaani he ordered Israel to block 2 vocal Muslims senators from visiting the country. Hivo tuu!! Nothing makes me smile as seeing anti-Trump batallion crying on his tweets

#2
the arabs will win the war ..dont count battles

#3
You're an idiot.. by the way, it doesn't give me pleasure to see Kenyans acting like baboons.

The leader of America's largest Jewish denomination is calling on Israeli Prime Minister Benjamin Netanyahu to reverse the ban on the two congresswomen.

The leader of America’s largest Jewish denomination is criticizing Israel’s decision to bar two Democratic congresswomen from entering the country.

Rabbi Rick Jacobs, president of the Union for Reform Judaism, said the move to block Reps. Rashida Tlaib of Michigan and Ilhan Omar of Minnesota from visiting Israel was “wrong, full stop.”

“Democracies do not hide; they can protect their security and well-being and also celebrate robust debate and engagement in the public square,” Jacobs said in a statement on Thursday.

The Muslim congresswomen were planning to visit Jerusalem and the West Bank on a tour to highlight the plight of Palestinians. Both politicians were banned from entering Israel on Thursday over their support for the global Boycott, Divestment and Sanctions movement. Supporters of the movement say it uses nonviolent, economic pressure to protest Israeli policies and advocate for Palestinians’ rights. Critics insist its ultimate aim is to delegitimize Israel. 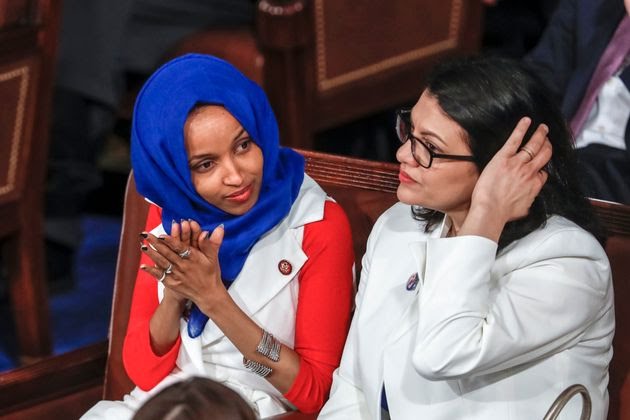 In this Feb. 5, 2019 file photo, Rep. Ilhan Omar sits with Rep. Rashida Tlaib at the Capitol in Washington. (ASSOCIATED PRESS)

President Donald Trump tweeted Thursday that it would “show great weakness” if Israel allowed the congresswomen to visit, claiming they “hate Israel & all Jewish people.”

Israeli Prime Minister Benjamin Netanyahu argued that Tlaib and Omar’s trip itinerary “revealed that they planned a visit whose sole objective is to strengthen the boycott against us and deny Israel’s legitimacy.”

The Central Conference of American Rabbis, the Reform movement’s rabbinical arm, has condemned the BDS movement. In his statement, Jacobs said that he doesn’t agree with Omar and Tlaib about BDS.

Still, Jacobs said he believes the strongest response to the congresswomen would have been to meet them head-on, “rather than to draw the curtains and hide.”

“Israel should use the opportunity afforded by the representatives’ visit to demonstrate why BDS is wrong and fails to offer a reasonable path forward in resolving the Israeli-Palestinian conflict,” Jacobs said.

The rabbi said both Netanyahu and Trump acted “recklessly.” Jacobs called on Netanyahu to reverse his decision and “use this opportunity to demonstrate Israel’s thriving democracy to the world.”

The man is getting desperate:
Fox News poll shows Trump losing to Biden, Warren, Sanders and Harris
https://www.foxnews.com/politics/fo...ads-democratic-race-warren-climbs-into-second
Click to expand...
Let them conduct as many polls as possible. wembe ni ule ule

#9
Most of these Democrats are hypocrites, if a supporter of Trump had been banned from traveling to some other country on any issue, they would be calling it a triumph, but when their own is barred "it's an attack on democracy", being allowed in a country where you are not a citizen is a privilege not a right....and a country has the right to bar you when they think/assume you don't help in any of their interests, whether good or bad..

#10
Speaking the truth about Israel has consequences and that's why I respect Rep Ilhan Omar for being so courageous.
There is nothing she has said about Israel that cannot be substantiated.
She shouldn't stop exposing the evil Jews since they wield so much power

#13
Yunomi said:
Speaking the truth about Israel has consequences and that's why I respect Rep Ilhan Omar for being so courageous.
There is nothing she has said about Israel that cannot be substantiated.
She shouldn't stop exposing the evil Jews since they wield so much power

https://www.independent.co.uk/news/...opian-jews-without-their-consent-8468800.html
Click to expand...
I don't know why our opinions are similar on so many issues. Most of the things you support are the things i support. Tungekuwa U.S tungeitwa far- left au liberal democrats.

#15
Tony254 said:
I don't know why our opinions are similar on so many issues. Most of the things you support are the things i support. Tungekuwa U.S tungeitwa far- left au liberal democrats.
Click to expand...
I'm always on the side of the truth even when it's ugly and unpalatable. There are things I do not agree with Rep Ilhan Omar kama mambo za supporting ushoga because I am an African man and ushoga is not what we do.
But she's an honest female and I like her for that. Trump is known to be a liar but I do support some of his positions.
Pointing out how Zionists control US congress like she did is nothing new to the world, but she got heavily reprimanded because they don't want another Dr Cynthia Mckinney in the House of Representatives.
Critics of Rep Ilhan Omar cannot find fault in anything she has said about Israel. And that is why they have to look for things like her "marriage" among other things.
P

#17
Yunomi said:
Speaking the truth about Israel has consequences and that's why I respect Rep Ilhan Omar for being so courageous.
There is nothing she has said about Israel that cannot be substantiated.
She shouldn't stop exposing the evil Jews since they wield so much power


But you love China a country that also forcibly sterilizes women and forcibly terminates pregnancies...
P

#18
And how can you just agree to be injected with pregnancy prevention drugs? Ati hukujua ni nini...

Hukujua ni nini and yet this is a drug used by the Ethiopian govt. ?

Hii ni kama story ya wendy waeni. There is more to it than meets the eye.

Maybe the drug was offered in a voluntary manner and the women thought, 'If I don't agree they wont let me go to Israel so I will agree to everything they offer!'

Then baadaye vile wamefika Israel and find it's not paradise they change narrative like Mama Wendy.

#19
patco said:
But you love China a country that also forcibly sterilizes women and forcibly terminates pregnancies...
Click to expand...
No I don't support anybody wholeheartedly. China has a long way to go to reach human rights level acceptable to all. I actually did a thread of China's organ harvesting from prisoners and I think it was @gashwin who didn't agree with me.
But I like the fact that China is helping build African infrastructure. I enjoy using the good roads and enjoy using Chinese phones. Quality and affordable