#1
i hope uhuru is smart enough to ban all flights from U.K coz of the new corona virus mutation spreading like wildfire .....if europe can block U.K , kenya should do too.....but uhuru anapenda hawa watu sana hawezi ban...

#2
Is this thing real ama ni post Brexit wars. Almost all EU countries are imposing bans on anything coming from the UK. 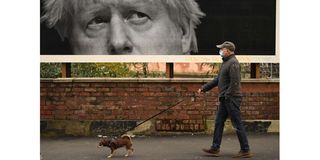 By AFP
Countries around the world have begun banning flights and travellers from Britain as London said the spread of a more-infectious new coronavirus strain was "out of control".
Here are the countries that have announced travel bans so far.
France said Sunday it will halt all travel from Britain for 48 hours from midnight Sunday including journeys "related to goods transport by road, air, sea or rail".

The ban on all but unaccompanied freight comes as companies scramble to shift merchandise across the Channel with days to go until Britain finally quits EU trade structures.
Prime Minister Jean Castex's office said the 48-hour period would offer time to coordinate a joint EU response that would ultimately allow travel from the UK to resume "with compulsory testing on departure".
Germany will halt all air links with the UK from midnight on Sunday, with the ban initially slated to last until December 31, Health Minister Jens Spahn told ARD public television. Cargo flights will be exempt.

A government source told AFP Berlin is already "working on measures" to extend the suspension into January, when the end of Britain's post-Brexit transition period means it will no longer be covered by EU rules that enable the flight ban.
Italian Health Minister Roberto Speranza said that he had signed a decree "which blocks flights from Great Britain and prohibits entry into Italy of people who have stayed there during the last 14 days".
Anyone already in Italy who recently travelled from Britain must be tested for coronavirus, the statement added.
The new virus strain has been found in one person in Italy who recently returned from Britain, the health ministry said.

Dublin said in a statement that all flights arriving from Britain from midnight Sunday would be banned for at least 48 hours.
Prime Minister Justin Trudeau said that as a result of the new variant of Covid-19, Canada would ban all UK flights for 72 hours.
In a tweet, he added those who had already arrived from Britain on Sunday would be subject to secondary screenings and "advanced measures".
All passenger flights from Britain to the Netherlands have been banned until January 1, the Dutch government said.
One case of the new virus variant has been found in the country, the health ministry added.
All plane and train travel from the UK to Belgium will be suspended for at least 24 hours from midnight Sunday, Prime Minister Alexander De Croo told television channel VRT.
Austria's health ministry told press agency APA on Sunday that Vienna is working out details for a ban on travel from Britain.
Sweden's Interior Minister Mikael Damberg told public broadcaster SVT the country was "preparing" to ban people entering from Britain "as quickly as possible", with a formal decision expected Monday.
Passenger flights from the UK will not be allowed to land in Finland for two weeks starting at midday on Monday, transport licensing agency Traficom announced late on Sunday.

Switzerland said it was suspending flights from Britain and South Africa, where a similar virus variant has been detected, from midnight Sunday "until further notice".

All three Baltic states -- Estonia, Latvia and Lithuania -- have halted all passenger flights from the UK. Lithuania will still allow flights to depart for the UK, while Estonia and Latvia have halted those as well.
Latvia has also banned bus and ferry passenger traffic to and from the UK. The bans will go into effect Monday and last until the end of the year.
Bulgaria said that flights to and from Britain would be suspended from midnight Sunday until January 31.
The government had earlier announced a 10-day quarantine for anyone arriving from the UK.
Romania has banned all flights to and from the UK for two weeks, beginning on Monday afternoon.
Croatia's Prime Minister Andrej Plenkovic said the country would "temporarily suspend passenger air traffic from the UK for 48 hours".
Turkey's Health Minister Fahrettin Koca said on Twitter that flights from Britain, Denmark -- where nine cases of the new strain have been detected -- the Netherlands and South Africa would be suspended.
Iran's health ministry has ordered flights from Britain suspended for two weeks, state news agency IRNA reported.

Israel said it was barring entry to foreign citizens travelling from Britain, Denmark and South Africa.
A joint statement by Prime Minister Benjamin Netanyahu's office and the health ministry also announced tough rules for Israelis returning home from those nations, saying that they would be confined in army-run hotels serving as quarantine centres.
Saudi Arabia said Sunday it was halting all flights and suspending entry through its land and sea ports for at least a week, with the option to extend for a further week.
Passengers who arrived in Saudi Arabia from Europe -- or any country where the new strain was detected -- starting December 8 will be required to self isolate for two weeks, and undergo testing.
Kuwait has added Britain to a list of "high-risk" nations and banned flights.
El Salvador's President Nayib Bukele said on Twitter that anyone who had been in Britain or South Africa in the past 30 days will not be allowed to enter the country.
Last edited: Dec 21, 2020

#8
We remember in February 2020 saying the airports be shut down but they could not allow the plandemic to totally miss Kenya so they waited an extra month to do the lockdown.
The plandemic has been very profitable to the elites and their business partners.
Even this new strain has to be allowed in because that is the only way. System ni ya majambazi
F

#9
johnpombe said:
@Finest wine kwisha.
Click to expand...
Have mercy on us. Kimeumana kapsaa. Isitoshe Brexit zimeenda topsy turvy. Families are not going to see each other for a long awaited xmas. We are in deep winter...it is sad.
Africa is one blessed continent.
F

Click to expand...
Wooishe...we are now pariahs. But usitucheke sana. Many of my friends have already come home for xmas. The effect of the lockdowns on the economy will be felt for a v long time. I still don't think BoJo and Matt Hancock know what they are doing. People are dying every single day.
You must log in or register to reply here.
Share: Facebook Twitter Reddit Pinterest Tumblr WhatsApp Email Link