#1
Uruguay was going toe-to-toe with Copa America hosts Chile in their quarterfinal contest on Wednesday evening inside a raucous, hostile Estadio Nacional in Santiago.

And then it all went to hell.

Striker Edinson Cavani was shown a second yellow card in the 63rd minute after an altercation with defender Gonzalo Jara, when it looked as though the physical striker made contact with the Chilean's face.
Why was the Uruguayan striker so incensed? Was it the fact that Jara's chin was barely grazed before hitting the turf after the most delayed reaction in football history?

That would be a legitimate gripe, but no.

The real reason, you see, was that Cavani had simply been reacting to the fact that Jara got away with slyly sticking his fingers between his buttocks ... 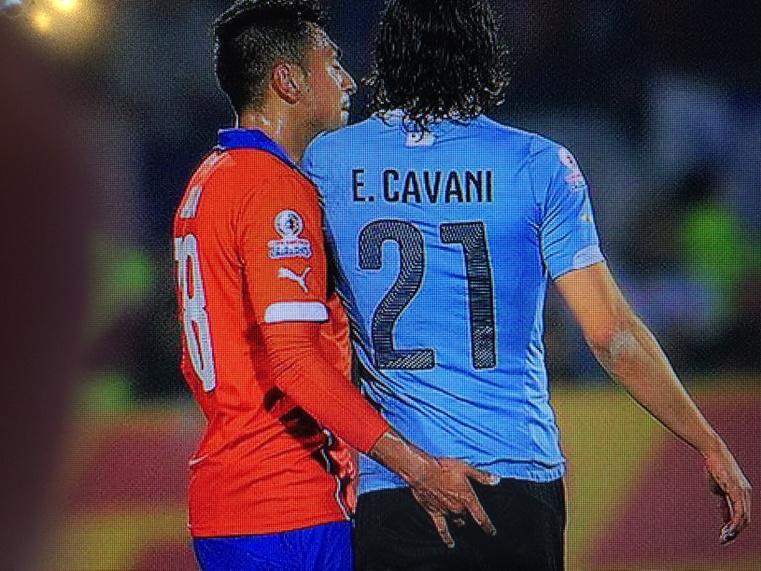 #2
Let alone,fingering ...i really hate those men who will hold you anywhere, atakama ni shoulder or hand.

#5
There was one funny mwarabu/coasto guy who kept hovering around me at Soho's in westie some years ago. The last straw was when i was buying pints at the bar when as im carrying my pints and for mama he comes to me smiling and tries to take the booze as if i bought him for him. Huko im shouting if he doesnt step away from me in the next 2 seconds i will beat him bloody with the bottles. the monkey walked away and i didnt see him again..
i usually never have beef with g** dudes. The ones i have interacted with dont cross such boundaries...

#9
that is rape using a finger.....Cavanni should sue this matapaka with sexual abuse

#11
I would have kicked that faggot in the balls.

#15
provocation in football is just too unfair. some of you may recall the zinedin zidane sending off after he headbutted materazzi after materazzi insulted zidane with his sister...

#16
Chiefkiumbe said:
Let alone,fingering ...i really hate those men who will hold you anywhere, atakama ni shoulder or hand.
Click to expand...
i find it quite uncomfortable even if its a relative

CNN is terming it as the FINGER INCIDENT