We don't know who grabbed 300,000 acres of Agricultural Development Corp land because the land can't speak.

A parliamentary committee wants the identities of 10 faceless people who grabbed 301,350 acres of land valued at Sh15 billion belonging to the Agricultural Development Corporation (ADC) made public.

The committee is set to meet the Ministry of Land on Thursday next week as it seeks to unravel the story behind the brazed grabbing.

“We need all copies related to this land and we will meet several government officials next week,” said the committee chairperson Rachael Nyamai.

“We will have an opportunity to look at the documents that will be presented by the National Lands Commission,” She added.

In a meeting with ADC management yesterday, the committee heard that the 10 people had started developing the portions they grabbed building infrastructure and dams.

Appearing virtually before the committee yesterday, ADC chairman Nick Salat said they didn’t have the identities of the 10 people and urged investigative agencies to look into it.

“I am not in a position to give the names of the influential people. All we are interested in is getting back the land. It is upon investigating agencies to give out the names,” said Mr Salat.

“ADC is not just sitting back watching the land being grabbed, we are on the ground but people who have taken this land are not there.”

Mr Salat told the lawmakers that there was a lot of activity on the grabbed land.

“There is massive infrastructure development, mining and construction of dams going on in the land but all these are not recorded in our records. We need to take back our land,” Mr Salat told MPs.

Mr Salat told the committee that as a government gazetted land, any sub-division, sale or transfer of the land must be brought to Parliament for ratification, in this case, none of the procedures was followed hence those occupying the 301,350 acres are encroachers.
S

#4
Karoga said:
...... "Prominent family" from kiambu,hawawezi kosa.
Click to expand...
You are wrong but let's wait for the full details to emerge.
L

#6
TuTu said:
You are wrong but let's wait for the full details to emerge.
Click to expand...
Or maybe he's not? 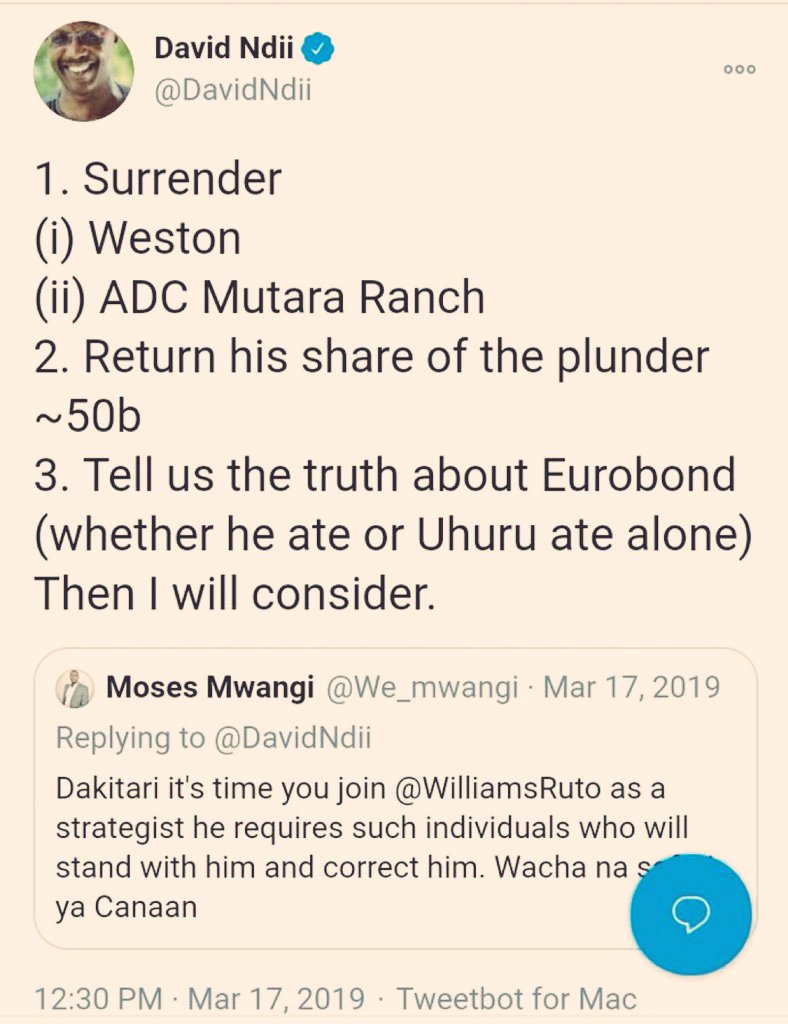 #12
Swansea said:
If I could hazard a guess, kuna mtu mmoja hatakosa.....ama wacha tu.
Click to expand...
Do you really need to guess?

#16
Wanaruona said:
Lakini tukiongea ukweli. Ruto kujiita hustler was a prophecy after we go for his looted public resources.

#18
uwesmake said:
@kalenjinkirdit @Kalenjin101 @sani @langatkipro huyu Ruto wenyu ataiba shamba kenya ikuishe , mwambie apunguze priss
Click to expand...
We all know the greatest land grabbers in Kenya. Everyone else is just an amateur. But expect low IQ bonobos to lose sight of an antelope while focusing on a dashing squirrel.