Why a Kiambu village is known as Zambezi

#1
Ive clicked for the anticlick clique
.

Nothing fascinates me than the PCEA Training Centre in Zambezi Kikuyu. Not that it is an extra-ordinary building but because of the past history. Of course few Kenyans know about this building – and its colonial bunkers- but at least those who have used the Nairobi-Nakuru Road know of Zambezi.

Now for many years this was the Zambezi Motel and it gave name to this village in the outskirts of Nairobi. Before it was re-opened on November 30, 1963 as the new Zambezi Motel, it had been lying desolate after it was abandoned by its previous owner.

That time, according to records, a 24-year Mrs Josephine Aron and her husband Sigi had decided to rehabilitate the building as the “best gesture of our faith in this lovely country”.

Josephine’s husband, was a land and real estate agent. Having worked in both Rhodesia and Zambia, he had fallen in love with the Zambezi River and wanted to immortalize his love by naming the 65-bedroom business, Zambezi Motel. It was actually the only motel, worth its name in Kenya. They also named their two cats, Zam and Bezi.

Designed to be a stop-over for motorists, it was expensively furnished, and had a site for caravans. A single would cost Sh 25 while a double was Sh45 by 1963. And by 1969 this had climbed to Sh45 for single ands Sh 80 for double. Zambezi was actually a luxurious stop over but before it was renovated it was simply Njogu-Inn. Owned by Mrs Berkley Mathews, Njogu-Inn was perhaps the best known hotel on the Nairobi-Nakuru Road. Her Husband E.J.H Mathew used to own the Kikuyu Estates – a huge swath of land which was later sold to James Gichuru, the pioneer minister for finance.

Mathews was one of the settlers who did not want to sample life under an African government and in 1963 shortly before independence she had offered it for sale for £32,000 – the entire building and its contents. But there were few takers for this. As more property was thrown into the market and with the fear of an African-led government reaching crescendo, the value plummeted to £6,000 and that is when it was purchased.

In one of her last interviews with a Kenyan paper, Mrs Mathews remarked: “We are sorry of course, but it is one of those things. We have already got rid of everything else…”

Njogu-Inn had been completed in 1953 just as the Mau Mau war broke. It was a bad investment; a bad bet. The owners had started constructing it in 1947 – the year that Jomo Kenyatta took over leadership of Kenya African union and started agitating for change. But few foreign investors thought that the “white man’s country” – as they called Kenya – would end up with an African government. Certainly not the Njogu-inn proprietor. But to safeguard her clients she build some bunkers underneath the building that were furnished too. Here, nobody would reach the clients – and even today, few at this church building know of these dark corners. 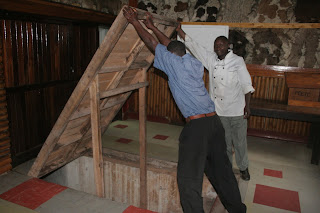 I recently came across an old review of Zambezi and the owner was grumbling that because it was far from the City, it was putting people off. Although she at one point dropped the cost of a double from Shs 80 to Sh 35. It failed to make economic sense. As the dollar crisis began in 1970s throwing the tourism industry into a spin. She sold it to PCEA Church as their training centre.

But the name she had abandoned Njogu-Inn for Zambezi had been picked a River Road trader who opened a hotel known as Njogu-Ini. It had the Njogu-Inn logo of an elephant although it means the place of elephants. How a place of worship was a beer hole is the untold story of Zambezi. Njogu-ini, the River Road bar, has survived ever since and Zambezi, the name, is now a village in Kikuyu. History continues…
http://johnkamau.blogspot.com/2015/06/why-kiambu-village-is-known-as-zambezi.html

#3
asante sana Swallow Saliva. always wondered about the same. that blog is very informative too

#5
Ugly but also nostalgic colonial relic there
Random thought, Settlers is a kind word for thieves and looters.. And you cant justify the willing buyer willing seller theory. Like James gichuru etc... Its like someone steals your laptop and sells it to me at a throw away price and when you complain about it, i retort willing seller willing buyer Hehe hope i am not derailing