#1
Ruto is a man caught up between the crosshairs of his responsibility as the president’s assistant and his ambition to take over from his boss after the 2022 elections.
It’s a road with two paths and Mr Ruto has to decide; does he promote the PDR-UDA party, which would mean launching a full-scale rebellion on President Kenyatta and risk it all with an eye on 2022 or does he lie low and wait it out at Jubilee which does not want him?

The dilemma he is facing was amplified yesterday when his supporters and allies wrote letters to Jubilee secretary-general Raphael Tuju resigning from the party and vowing to join the yet-to-be ratified wheelbarrow party, the United Democratic Alliance.
“I wish to invoke Section 14 of the Political Parties Act and tender my resignation as the golden member of the Jubilee Party,” read a letter seen by the Nation written by Peter Kamau AKA the Don. A call to him confirmed the letter was genuine.

Leaders allied to the DP also posted the new party colors and the wheelbarrow symbols on their social media accounts throughout the day yesterday.
Former Machakos Senator Johnson Muthama, a Ruto ally, yesterday said UDA will guarantee the unity of all Kenyans.
“We will open doors to everybody who wants to enjoy and feel democracy is existing. But wait until January 7 for other details,” said Mr Muthama.
However, the DP’s office yesterday dismissed claims that the second in command is set to abandon the Jubilee Party and be the leader of UDA. “I do not know anything about the new party.
What I know is that William Ruto is the Deputy President and deputy party leader of the Jubilee Party,” said Director of Communication Emmanuel Tallam.

The right time to jump ship

MPs allied to his party also insisted that they are still in Jubilee until it is the right time to jump ship.
“We are still members of Jubilee until we are not,” said Mathira MP Rigathi Gachagua.
Belgut MP Nelson Koech, another ally of the DP, disclosed that leaving the party will be an option in case the party’s National Delegates Convention (NDC) will fail to address their pertinent issues.
But Mr Ruto and his allies cannot jump ship now. If they defect or openly support a different party, they will face by-elections, which many of them are not ready for.
However, since PDR is a member of the Jubilee coalition, they may not be sanctioned for associating with it as the Political Parties Act provides for such cooperation.
However, failure to provide a direction to supporters wary of the fights in Jubilee and yearning for direction may also brew sentiments against the DP and portray him as a coward who cannot stand up to his detractors.
“We cannot tell our people to just sit and wait as we see the ship sinking and we are not thinking of alternatives. They will think we are fools,” added Mr Gachagua.
Kimilili MP Didmus Barasa, another ally of the DP, said it was inevitable, that DP allies start looking for a new home as their supporters do not want to associate themselves with the Handshake, BBI and are not welcome in Jubilee.


“UDA is our hustlers’ party. We have spent a lot of resources as members of Jubilee to build this Party. We contribute Sh20,000 on a monthly basis to support the operations of Jubilee. If they do not want us in this party, we are ready to leave but we will not leave it the way it is. We will bring it down in less than 14 days before we leave,” the Kimilili MP added.
Mr Ruto and his allies see no path to the presidency through Jubilee.
Writing on the wall
Though the writing has been on the wall for sometime, the purge on Dr Ruto’s allies in Parliament in May that led to the removal of Elgeyo-Marakwet Senator Kipchumba Murkomen and Garissa Town MP Adan Duale as National Assembly and Senate majority leaders, respectively, and Tharaka Nithi Senator Kithure Kindi as deputy speaker exacerbated the siege mentality.

I want to assure Kenyans that by the end of the year Kenya will have a new deputy president.
- Hon Maina Kamanda-

Dr Ruto’s allies were also kicked out of the party’s leadership in April when Mr Tuju appointed Lucy Nyawira Macharia, Marete Marungu, Walter Nyambati, Jane Nampaso, and James Waweru to replace Fatuma Shukri, Pamela Mutu, and Veronica Maina at the party's NMC.
With no control of Jubilee party, it means he cannot enter into any coalition using Jubilee, field candidates in by-elections to gauge his strength or use the party to project power.

The DP has alluded to that in an earlier outburst when he said that there are plans by certain forces led by the party's vice-chairman, Mr David Murathe, to bar the party from having a presidential candidate in the 2022 General Election.

Failure to field candidates in by-elections has particularly irked Mr Ruto as he felt that he would have used that strategy to gauge his political strength ahead of the 2022 elections.
But the goings-on at Jubilee are not just irking Dr Ruto’s supporters, but other Jubilee party members who are not allied to the Deputy President.
“We have a problem in Jubilee. There are more members outside the party than there are inside. The party leadership led by the secretary general should wake up and smell the coffee. It is time to accommodate everyone,” said Nairobi senator Johnson Sakaja.

However, allies of President Uhuru Kenyatta said the DP and his diehards had left the ruling party long ago and the unveiling of the UDA is a clear indication that they are fed up with Jubilee.
“They walked out of the Jubilee Party a while back and they are just in associating with it because leaving officially would cost them their positions,” said Nyeri Town MP Ngunjiri Wambugu.

David Too, 51, is said to have plunged himself into Ngeria dam on Friday, an incident that caught family members and relatives by surprise.

According to family members, the deceased was attached to the DP’s security detail for several years.

Locals mill around the dam where a police officer attached to the Office of the Deputy President jumped into, January 1, 2021.


It is said he came home on December 29, 2020 for a family meeting before he drowned himself at the dam three days later.

Details about the incident remain scanty although his elder brother Aaron Sing’oei said the deceased arrived home with a camera which was later stolen after unknown people broke into his house the same day he arrived home.

“The deceased who has been working with DP Ruto’s security team came home on Tuesday because that day we had a family meeting. He had a camera which was stolen and he reported the matter to the police. It is unfortunate that he took his life," said Mr Sing’oei.

“He called me in the morning at 8:57 am and told me that he was under pressure. He then hang up.
When I called back and he did not answer. I only discovered later that he had taken his life," Sing’oei said.

The content of the stolen camera are yet to be established.

The body of the deceased was retrieved from the dam on Friday afternoon.

Police said investigations into the matter have been launched. The police however said the deceased did not leave behind a suicide note.

“Investigations are ongoing. I was present when the body was retrieved from the dam and no suicide note was found," said Uasin Gishu boss police Ayub Ali.


The DP’s director of communication Emmanuel Tallam confirmed to the Nation that the deceased was a prison warden who was under the press unit.

“The deceased was not in the DP's security team but was a prison officer working as a driver in our communication team,” said Mr Tallam.

Mr Too’s death comes barely a year after Sergeant Kipyegon Kenei, an officer attached to the Deputy President's office, who was believed to have been a key witness in the fake Sh39 billion arms deal, died mysteriously.
Last edited: Jan 2, 2021

#5
Mtu Wa Majuu
"She respects me despite having written me off since I had become successful,” the DP recounted". She has no option but to respect you. She missed the opportunity of becoming kenya's second lady and most likely the future first lady. But not all that glitters is gold as Madam Ruto had to withstand a big humiliation when the hustler"s mpango wa kando accused him of being a dead beat dad. Anyway, bahati ya mwenzio, usiilalie mlango wazi.

This is after Deputy President Ruto's supporters blocked a section of the road obstructing the senator's convoy when it arrived. 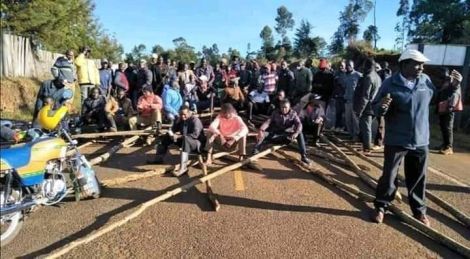 Reports indicate that Moi had been invited by Christopher Koyoki, the former chair of Talai council of elders, to be crowned as the official Kalenjin leader, a title said to be occupied by DP Ruto.


Koyoki also attempted to calm the youth down but was forced to retreat.

The convoy proceeded to Kabiyet Trading Centre to interact with the area residents.

Efforts to address the residents proved to be futile as the senator was met with chants and heckles which forced him to go back to his car.

A section of political leaders took to social media to condemn the action of the rowdy youths.

"I have received reports that Senator Gideon Moi was blocked by Nandi residents from visiting Talai elders this morning.
This is backward. This is primitive. This is wrong.

However, this was disputed by a section of Talai elders who noted that the ceremony was illegal.

They claimed that young men had carried out the ceremony which was against their traditions.

Furthermore, they pointed out that the young men failed to consult the Kalenjin elders

National Police Service Boss Eliud Kinuthia has called for an independent probe into the death of DP William Ruto's staffer David Too.

The officer explained that the exercise was set to prioritize psychosocial support.

The DP mourned too as a 'dependable, approachable, took pride in his work and strived to put things right."

The office of Deputy President William Ruto has responded to reports that a security officer attached to his office committed suicide in mysterious circumstances.

Speaking to The Nation, the DP’s Director of Communication, Emmanuel Tallam confirmed that the deceased, David Too, was attached to the DP's press unit as a driver.

He further explained that Too, who was a prison warden, was not part of Ruto's security detail.

“The deceased was not in the DP's security team but was a prison officer working as a driver in our communication team,” stated Tallam.

Confirming the incident, Uasin Gishu County police commander Ayub Gitonga told the press that the deceased did not leave behind a suicide note.

“Investigations are ongoing. I was present when the body was retrieved from the dam and no suicide note was found," he explained.

It is suspected that Too jumped into Ngeria dam in Uasin Gishu on Friday morning, January 1, three days after visiting his family.

His brother, Aaron Sing’oei suspected that Too killed himself due to pressure after he lost a camera under his watch.

The camera had allegedly been stolen by unknown people who broke into his house on Tuesday, December 29.

“The deceased who has been working with DP Ruto’s security team came home on Tuesday because that day we had a family meeting.
He had a camera which was stolen and he reported the matter to the police. It is unfortunate that he took his life.

“He called me in the morning at 8:57am and told me that he was under pressure. He then hang up. When I called back and he did not answer. I only discovered later that he had taken his life," explained the brother.