#1
American Airlines sorry after 'telling woman to cover up' 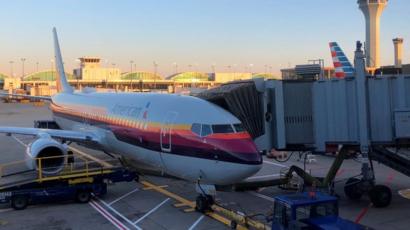 Image copyrightGETTY IMAGESImage captionDr Tisha Rowe said she felt "policed for being black" and curvaceous
American Airlines has apologised after allegedly telling a female passenger to wrap herself in a blanket to hide her outfit.
Dr Tisha Rowe said the incident happened on 30 June on a flight to Miami from a family holiday in Jamaica.
The 37-year-old said online she felt body-shamed and humiliated after being told to cover her "assets".
A tweet she shared of the playsuit she was wearing has been shared thousands of times since.
Dr Rowe was flying from Kingston with her eight-year-old son when the incident occurred.
She alleged a flight attendant first asked her to step off the plane, then described her outfit as "inappropriate" to fly and asked if she had a jacket to "cover up" with. 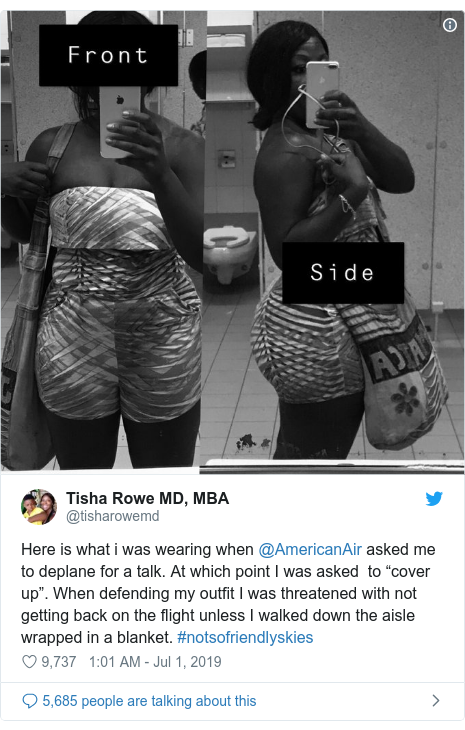 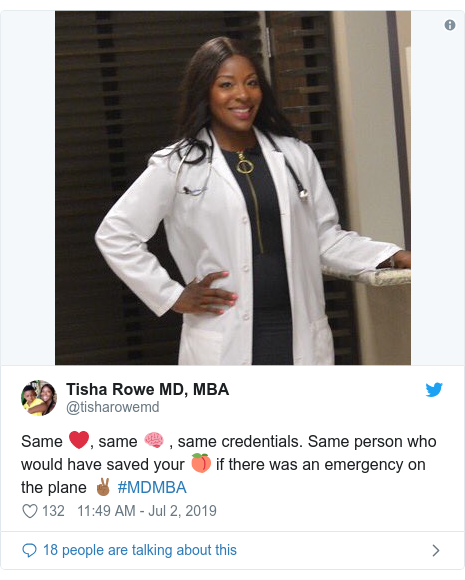 After attempts to defend her outfit apparently failed and her son become upset, Dr Rowe said she felt forced to wrap a blanket around her waist and return to her seat feeling "humiliated".
"To me, there was never an ounce of empathy, an ounce of apology, any attempt to maintain my dignity throughout the situation," she told Buzzfeed News.
Dr Rowe has also accused the airline of racial bias and discriminating against her body type.
"We are policed for being black," she said in one tweet. "Our bodies are over sexualized as women and we must ADJUST to make everyone around us comfortable."
"I've seen white women with much shorter shorts board a plane without a blink of an eye."
On Tuesday the airline said they had apologised to Dr Rowe and her son and refunded their travel.
"We were concerned about Dr Rowe's comments, and reached out to her and our team at the Kingston airport to gather more information about what occurred," a spokeswoman said in a statement to US media.
"We are proud to serve customers of all backgrounds and are committed to providing a positive, safe travel experience for everyone who flies with us."
In 2017 the National Association for the Advancement of Coloured People (NAACP) issued a "national travel advisory" about American Airlines, citing "possible racial bias" and "disturbing incidents".
They later lifted the advisory in 2018, after working with them for a year on initiatives like implicit bias training.

#3
Chiefkiumbe said:
Why ist African all the time ?
Click to expand...
Discrimination.

#4
Hakuna black or white, wanawake wajifunze kuvaa vizuri.
These western societies have messed with women's intellect. Walking around naked is considered liberating, covering up or being modest is considered backward.
Very confusing times to live in...
P

#5
That was too much African booty for the good white folks on the plane. She had to cover up or deplane. Case closed

#8
Mtu ajiheshimu ndio apewe heshima, these western bitches have started walking naked in the name of freedom. Na hizi bonobo za kwetu zimeshika notepad na kalamu, zinangoja tu ku-ape. If I was having a medical emergency on the plane, I'd hesitate to be assisted by a doctor who looked like a slut.

#9
captain obvious said:
Mtu ajiheshimu ndio apewe heshima, these western bitches have started walking naked in the name of freedom. Na hizi bonobo za kwetu zimeshika notepad na kalamu, zinangoja tu ku-ape. If I was having a medical emergency on the plane, I'd hesitate to be assisted by a doctor who looked like a slut.
Click to expand...
Just for the record, tribes like jaruos, turkanas and pokots used to walk ndethe ndethe kabisa, as in not even a blade of grass. So saying that women nowadays walk naked against our culture is.......................well, you know........................

#12
Deez Nuts said:
you are brainwashed by colonialists and the church , 99 years ago being naked in africa wasn't frowned upon .........
Click to expand...
You are stupid. Who said it was?