You Have To Feel Sorry For Prince Charles

#1
You patiently wait your turn on the royal throne but some old witch woman, who also happens to be your mother, has her ass firmly planted on it. Plus, she's actively #Resist!-ing death. Hako kashosh kameamua hata Mugabe na miaka zake rwabe kwa kiti hawes mfikia.

65 years bana!!
Last year there were rumors to the effect that the Queen would abdicate in 2018 in favor of Charles, although other sources put those rumors to rest. Apparently she swore to serve Britain all her life and that's just what she plans to do. She's 91 years old now. Given the fact that she's a Queen hence has access to top class health care, plus she's a woman and they generally live longer, she can do 100 years easy.

Now, on the other hand, Charles is 69 years old. If his mother pushes another 6 years, he'll be 75 years old, sevente fae!! Sasaaaa, kuna haja kweli? Si hiyo kiti itakua imeisha ladha?
You know shit is real when you're so old that you could pass for your mother's agemate.

It would be more advisable for him to just hand it over to William. Anyway, what the f**k do I know?
Back to Mugabe, he's been using his time constructively. He spent some of it with his childhood playmates, catching up and generally interacting with the small mwananchi. He even confessed that he'd "missed this life". Maybe the queen should take note. Like I said though, hayanihusu, ni kupayuka tuuuu. 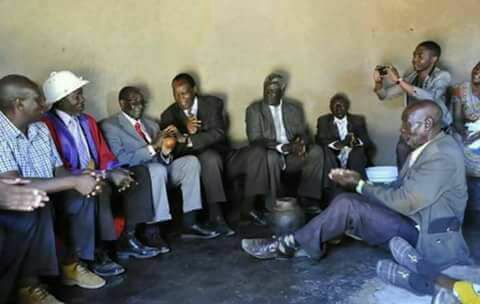 #4
Here I agree with Guku. I don't care, let them continue practicing incest if it helps them.


huyo mama amekalia kiti mpaka i thought that kingdom is matriachal like the okuyu kingdom .
D

#12
kyuktothecore said:
You know shit is real when you're so old that you could pass for your mother's agemate.
Click to expand...

#16
Baby Panay said:
Ati okuyu? My fren tafuta pesa alafu ucheze siasa za kushikanisha watu uone kama hutachaguliwa. For example, we don't hate Raila, we just don't like the supporters.
Click to expand...
THE OKUYU NATION WAS BORN FROM TWO WOMEN PHUCKING EACH OTHER AND GIVING BIRTH TO THE NATION THATS WHY THE FATHER OF THE OKUYU NATION IS MUMBI

#17
Duke of Busia said:
Alafu grandson wa queen decides to marry a lady that i have seen her ass n boobs plenty of time than the rocks of the great nyika plateau
Click to expand...

the rocks of the great nyika.
T

#18
uwesmake said:
THE OKUYU NATION WAS BORN FROM TWO WOMEN PHUCKING EACH OTHER AND GIVING BIRTH TO THE NATION THATS WHY THE FATHER OF THE OKUYU NATION IS MUMBI
Click to expand...
Of course and the okuyuness is passed via the woman, wewe lea wasapere polepole swine.